This inconspicuous clapboard house in Aiken was built around 1835 and served as the home of renowned poet James Mathewes Legare (le • GREE) in the 1850s. Legare, also a painter, used part of the house as his studio. His family sold it to Thomas C. Morgan in 1870, and it remained in the Morgan family for over 100 years. 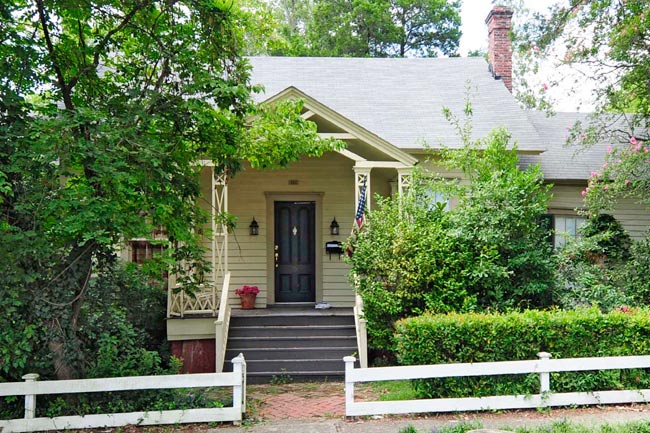 The Legare-Morgan House is listed in the National Register:

The Legare house is a small, one-story clapboard structure, the oldest portion of which was probably built ca. 1835. Between ca. 1850 and 1859 it was the home of James Mathewes Legare, noted artist, poet and inventor. Located to the left is a wing consisting of two rooms. This wing was built ca. 1850 by Legare as a studio. Originally a separate building, it was later moved to adjoin the house. Around 1900 to 1910 a balancing wing was added to the right side of the structure. Recently other alterations and additions have been made to the rear: the porch was enclosed and an addition was made to the left side.

It was the field of literature that James M. Legare was most widely known. In 1848 he published Orta Undis, and Other Poems, and he contributed both poetry and prose to periodicals. However, Legare was also an imaginative inventor and artist. Legare’s paintings were primarily of landscape and genre scenes. One of his inventions, plastic cotton, could be molded into furniture, frames and decorative moulding. Legare died in 1859. In 1870 his family sold the property to Thomas C. Morgan. Descendants of Mr. Morgan continue to occupy the structure until the time of its nomination. Located to the rear of the property are a stable and a later structure which have been converted into apartments.