The brick ruins are all that remain of Seven Gables, a stately hunting lodge that once graced these grounds. The Tudor-style manse was built in 1903 by North Augusta founder James U. Jackson, the same year he completed his crown jewel, the Hampton Terrace Hotel. Jackson built the house as a hunting lodge for wealthy Northern visitors who traveled to the city to hunt on the Hampton Terrace’s 1,500 game preserve, just one of the extravagant amenities available to the luxury hotel’s guests. 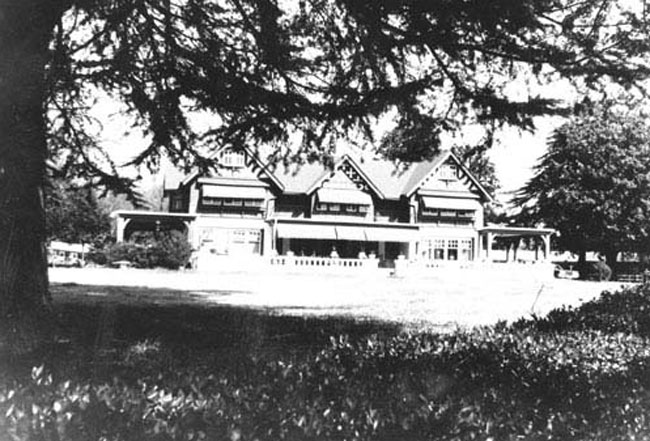 Writer Edison Marshall was a guest at the hunting lodge and is said to have composed his novel The Vikings during his stay. Also called the Palmetto Lodge, the house was purchased as a private residence by John Herbert of New York not long after it opened. Another structure built as a guesthouse for the Hampton Terrace Hotel, Sesame Lodge, still exists today as a private residence. 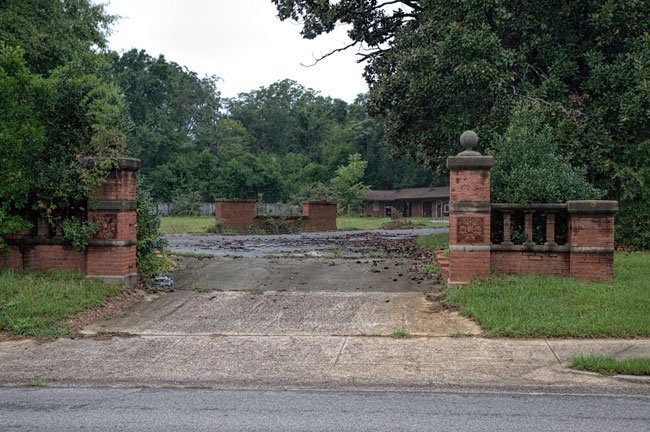 Ownership of the Seven Gables changed several times over the years following Herbert’s purchase. A one-story, L-shaped motor lodge called the Seven Gables Motel was built behind the home in the 1950s, followed by a restaurant inside the house in 1966. During the 1980s owner Bruce Salter lived upstairs with his family and opened a bar called the Buffalo Room on the bottom floor. The Buffalo Room excluded African-Americans, a policy exposed by the NAACP in 1989. Salter closed his business as a result, though his son, Randy, re-opened a restaurant in the building a few years later. Randy Salter was later arrested on drug and weapons charges, and the building was sold at auction. 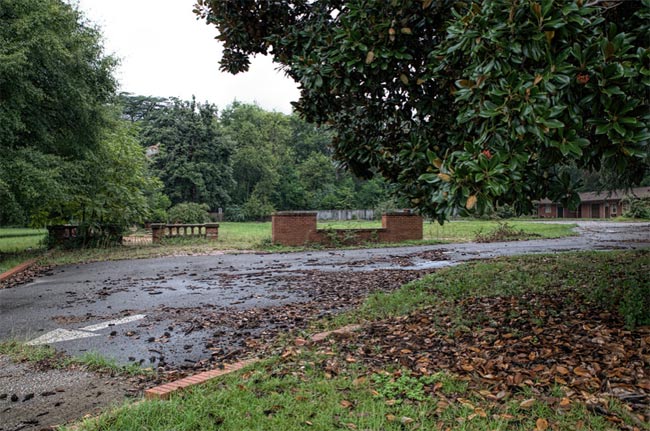 The restaurant re-opened under new ownership as the Palmetto House in 2007, but on September 4, 2008 the building burned – the same fate that befell the Hampton Terrace Hotel on New Year’s Eve in 1916.

Seven Gables is listed in the National Register as the Palmetto Lodge within the Georgia Avenue-Butler Avenue Historic District:

Located in a predominantly residential area of North Augusta, the Georgia Avenue-Butler Avenue Historic District is on a hill overlooking the city of Augusta, Georgia. The district contains four buildings of particular historical or architectural importance plus twelve supporting properties, which include houses, an old family burial ground, open space, and an undeveloped lot. Only three buildings located within the district do not contribute. The sixteen total properties in the district illustrate the growth of the area from the time it was part of an antebellum plantation through its development as a winter resort and year-round residential community for Augusta area professionals around the turn of the twentieth century. Most of the buildings were constructed between 1900 and 1930 and represent a range of vernacular residential designs including Classical Revival, Queen Anne/Victorian era, Colonial Revival, and Tudor Revival. One of the key properties is a plantation house that was built around 1859, two of the other key properties are buildings associated with a hotel that stood from 1903 to 1916. The district also contains an old family cemetery.