Silver Bluff Audubon Center and Sanctuary is a wildlife refuge that runs about 2.5 miles along the Savannah River near Jackson in Aiken County. The sanctuary is owned by the National Audubon Society and is home to a wide variety of forests, lakes, streams, plants, and animals. Over 200 species of birds can be found within the sanctuary, including the endangered wood stork and bald eagle. 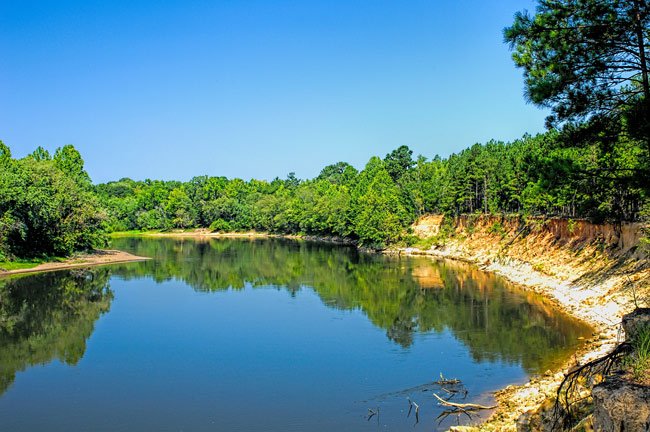 Larry Gleason of Aiken, 2007 © Do Not Use Without Written Consent

The sanctuary rests on property that was once part of Silver Bluff Plantation. The land was purchased by Irish immigrant George Galphin in the mid-eighteenth century. Galphin dammed part of Hollow Creek, creating a millpond to power a sawmill and gristmill. Galphin was also a well-known Indian trader, and the site of his former post holds great historical significance.

During the Revolutionary War the trading post was fortified by the Loyalists and known as Fort Galphin. The fort was eventually captured by the Patriots in a May 21, 1781 skirmish, and the supplies within the trading post were used by the militia. The site of the former trading post and fort remains relatively untouched, and ongoing archaeological digs within the sanctuary continue to unearth artifacts.

(Fort Galphin) Silver Bluff or Galphin Trading Post comprises about 175 acres of cultivated fields and small wooded areas on a steep bluff overlooking the Savannah River. Silver Bluff was the site of an Indian trading post established by George Galphin in the early 1740s. Galphin Trading Post serviced the Yuchi and after them the Coweta, a group of the Lower Creek nation. Galphin’s sphere of influence extended south and west and included Charleston, Savannah, St. Augustine, Pensacola and Mobile. Traders operating out of such places obtained their wares from him.

Galphin, sympathetic to the colonists, was appointed Commissioner of Indian Affairs for the Southern District in 1775. Pertaining to the Galphin Trading Post, there were a number of structures in the area, which included the trading post, barge docks, way-station for travelers, holding-pens for livestock and numerous cabins for family and slaves. At the time of the Revolution, Fort Galphin was built, consisting of a stockaded brick building. This brick structure, probably the Galphin home, was still standing in the early 1870s. After George Galphin’s death in 1780 at the age of 71, the locality of the trading post was known as Galphinton. The community had vanished by the twentieth century.

Contributor Larry Gleason writes: “Many people have heard of Silver Bluff on the South Carolina side of the Savannah River and certainly know all the namesakes like Silver Bluff Road and Silver Buff High School, but not many have actually seen the Silver Bluffs. The foundation of the old trading post is nearby in the woods to the right. The location got its name Silver Bluff because early travelers on the Savannah River routinely saw the bluffs when sunlight reflected off the mica in the sand at an angle which gave the bluffs a silver appearance.”