The Cedars in Aiken County is also known as the Ardis House or the Atkinson House for its two previous owners. Abram Ardis, Jr., built the house in 1825. Businessman Edward Heyward Atkinson added to it in 1908, opting for an ornate Victorian style in keeping with the fashion of the early twentieth-century elite. 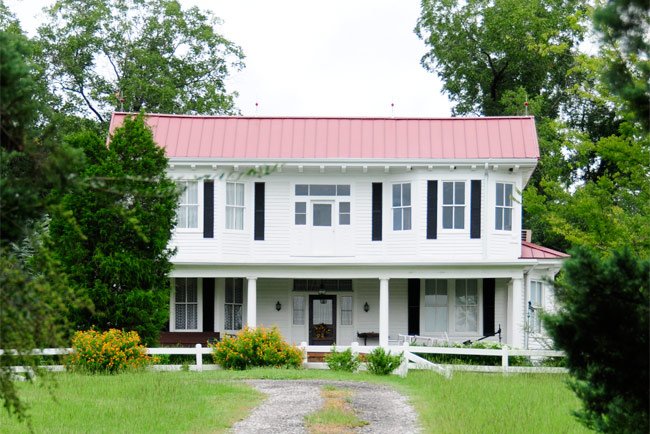 The Cedars is listed in the National Register:

The Cedars complex is significant because it is an unusual combination of two wholly distinct architectural styles, the simple vernacular and the ornate folk Victorian. The later addition represents the changing social status of the owner at that time, Edward Heyward Atkinson, a local farmer, businessman and community leader in Beech Island. Built by Abram Ardis, Jr., around 1825, the original core of The Cedars main residence was a two-story, three bay, frame and weatherboard structure with no exterior embellishment with the principle entrance on the east elevation.

Edward Heyward Atkinson, who doubled the size of the original building, built the second stage around 1908-1910. This two-story addition was built onto the south elevation of the original house and was faced with a one-story, full-width porch. The property is also significant because of three contributing agricultural outbuildings: a weatherboard barn with a standing seam metal roof, an early twentieth century frame tenant house covered with board and batten siding (a two room house, it is one remaining of the three that originally stood on the property), and a smokehouse. The complex of house and outbuildings represent and codify the changing agricultural practices of rural Aiken County from 1850 to 1925.

Plan Your Trip: The Cedars