The Virginia Durant Young House, built circa 1881 in Fairfax, was the home of writer and suffragist Virginia Durant Young and her husband, Dr. William Jasper Young. Virginia Durant Young was a novelist and journalist and the first woman to be elected to the State Press Association. She worked with Susan B. Anthony for women’s suffrage and published the Fairfax Enterprise, a newspaper devoted to “promoting women’s rights, correcting the wrongs done woman, and the advancement of good fellowship among all mankind.” 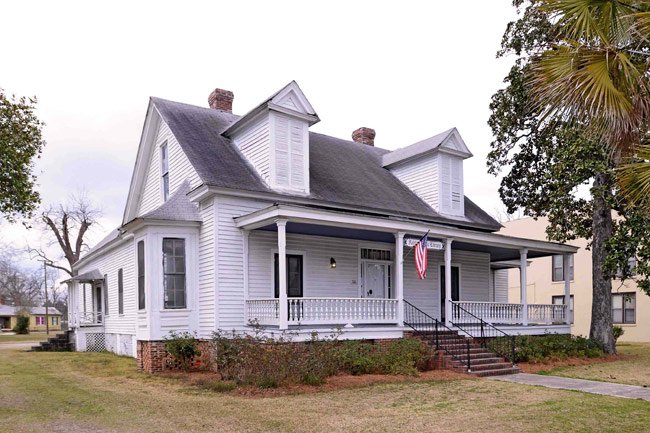 This home served not only as the Youngs’ residence, but also as the office of the Fairfax Enterprise as well as Dr. Young’s medical practice. The Virginia Durant Young House is listed in the National Register, which offers the following architectural details:

The Virginia Durant Young House is a one and one-half story frame, weatherboarded, vernacular Victorian cottage associated with the career of Virginia Durant Young, journalist, novelist, humanitarian, political activist and internationally recognized leader of the women’s suffrage movement in South Carolina and the nation. The house was probably built ca. 1881, shortly after Mrs. Young and her husband, Dr. William Jasper Young acquired the property. The home also served as the office for Mrs. Young’s newspaper, the Fairfax Enterprise and as the office for Dr. Young’s medical practice.

The house rests on brick piers and has an irregular U-shaped plan that incorporated a medical office for Dr. Young. The core of the house has a gable roof with boxed cornice and returns and features two interior chimneys and one exterior chimney now enclosed by the addition to the northwest of the house. Two gable-roofed dormers pierce the front slope of the roof. A slightly recessed flat-roofed wing with a bracketed cornice extends from the right side of the building. The building, at time of nomination, housed the Fairfax Public Library.