The newly-remodeled Chiquola (pronounced shuh-cola) Condominiums in downtown Anderson began as the elite Hotel Chiquola in 1888. This unusual word is a French derivative of Chicora, the name of the Native-American tribe which greeted Spanish explorer Lucas Vazquez de Ayllon on the shores of present-day Pawleys Island in 1526. The hotel was the idea of Anderson native Frank Wilhite, who noticed the city was void of a grand hotel when he returned to his hometown after attending school in Chicago. Construction began in 1887, and the accommodation opened for business on December 21, 1888. 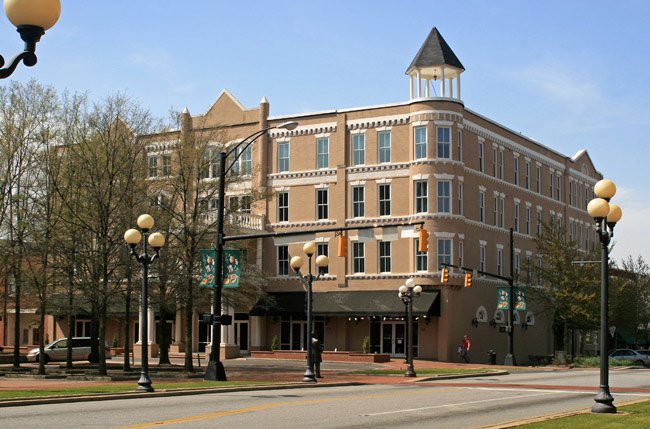 The hotel boasted a spectacular atrium on the first floor along with a bar and billiards room. An opulent dining room with ceilings stretching 15 feet high occupied the second floor. The third and fourth floors housed 45 guest rooms, including the fourth-floor Governor’s Suite beneath the turret. Governor John Peter Richardson, III was the luxury suite’s first guest. The hotel hosted other famous visitors during the height of its popularity, including film actresses Tallulah Bankhead and Helen Hayes. 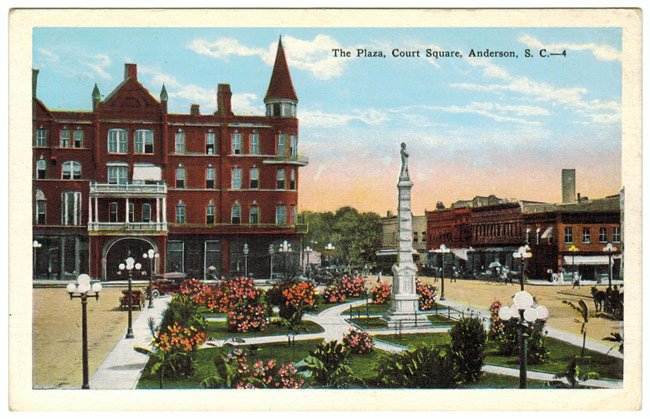 Undated Postcard, Property of SCIWAY, Do Not Use Without Written Consent

The hotel changed hands – and names – in the 1920s and was called the Plaza Hotel in 1924. The building’s structure and facade also underwent modifications during this era, including the removal of the iconic turret. Anderson suffered economic hardships throughout the latter half of the twentieth century. Downtown businesses closed, resulting in fewer out-of-town visitors, and eventually the Plaza Hotel closed as well. 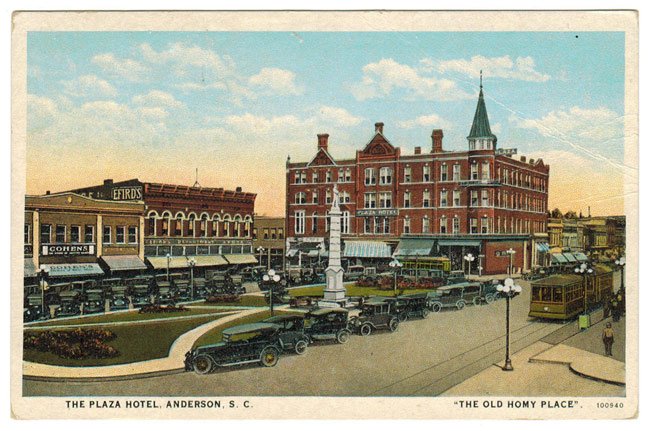 Undated Postcard, Property of SCIWAY, Do Not Use Without Written Consent

By the 1980s, the once-celebrated building was condemned. Yet as Anderson began revitalization efforts in the 1990s, investors saw potential in restoring the old gem. In 2006 workers began converting the hotel to upscale condominiums, and in 2007 the revived hotel opened as private residences with a social club – the Chiquola Club – on the ground floor. A new turret was added to the restored building, making its appearance similar to the hotel’s original appearance when it opened in the late-nineteenth century. 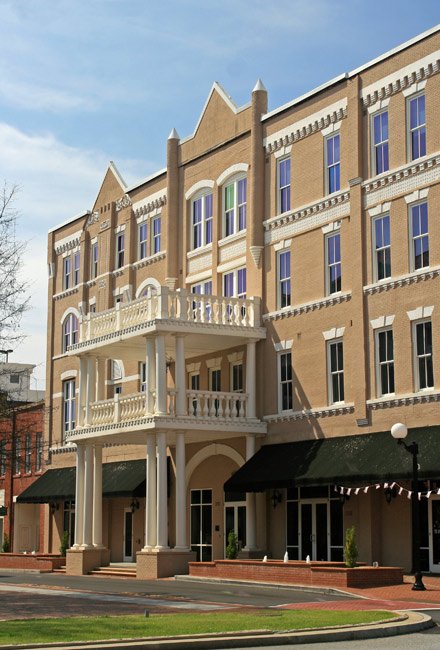 The Chiquola Condominiums are listed in the National Register as the Plaza Hotel in the Anderson Downtown Historic District:

The Anderson Downtown Historic District is primarily significant as a well-preserved late nineteenth/early twentieth century commercial area. The district retains a typical town plan with a courthouse square in its center, as well as numerous good examples of Victorian, Romanesque Revival, and Beaux Arts commercial architecture. Anderson, incorporated 1833, is also significant for its role as a commercial, governmental, and cultural center for Anderson County. The Anderson Downtown Historic District is comprised of approximately 97 commercial structures, the County Courthouse, the Anderson City Hall, a Victorian fountain, and two historic monuments. The brick constructed structures date primarily from the late nineteenth and early twentieth centuries, and are located in the heart of Anderson’s central business district. The courthouse and surrounding square serve as the focal point of the historic district. Located southeast of this commercial district is the residential Anderson Historic District.