God’s Acre Healing Springs are located behind Healing Springs Baptist Church in Blackville on land that has the unusual distinction of being deeded to God. Their mineral waters flow from nearby artesian wells, and the springs have been a source of folklore spanning centuries. Native Americans who lived near this site believed the waters were sacred because of their healing properties. Today, people continue to tout the water’s health value and will travel long distances to collect gallons at a time.

Stories of the springs’ healing power were popularized during the American Revolution. Legend holds that four British soldiers were severely wounded in a nearby battle at Windy Hill Creek. They, along with two men ordered to bury them when they died, were rescued by Native Americans, who took them to the springs. Six months later, all of the soldiers returned to their post in Charleston, crediting the springs’ water with their miraculous recovery. 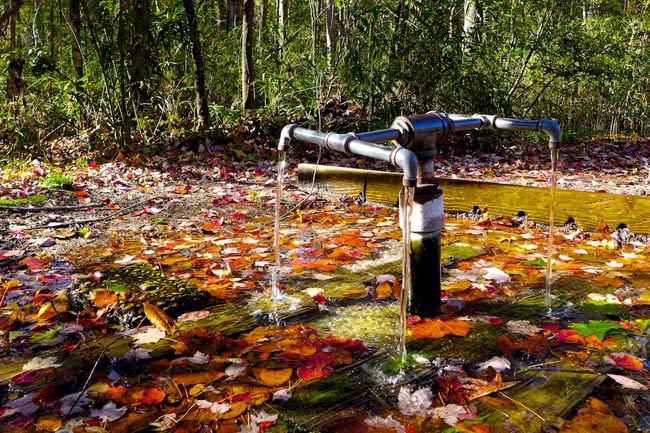 Native Americans are said to have sold the springs to a trader named Nathaniel Walker for corn. Walker was also the founder of the adjacent church, which originally was known as Edisto Church after the South Edisto River. The land passed through many hands before it was eventually purchased by Lute Boylston. In 1944, Mr. Boyston decided to deed the land to God so that everyone could enjoy the spring’s healing powers.

Centuries later, South Carolinians continue to hold the site sacred, and many people – of all races and socioeconomic classes – travel hours to collect water from its humble spigots. The springs are accessible via a paved sidewalk and ramp which takes you directly to the water source, making it completely handicap accessible.

The front of the historical marker at God’s Acre Healing Springs reads:

By tradition, Healing Springs got its name during the Revolutionary War. In 1781 after a bloody battle at nearby Windy Hill Creek, four wounded Tories sent inland from Charleston by General Banastre (The Butcher) Tarleton were left in the care of two comrades who had orders to bury them when they died. Luckily, Native Americans found them and took to their secret, sacred healing springs. Six months later the Charleston Garrison was astonished by the reappearance of the six men. All were strong and healthy.

Ownership of the springs passed from the native “Indian” tribes who revered them to an Indian trader, Nathaniel Walker, who bought them with corn. The site passed through several hands until it was acquired by L. P. Boylston. On July 21, 1944 he deeded the land and the springs to GOD. The waters, by analysis are exceptionally pure and contain healthful minerals. People today, as in the past, believe they truly are Healing Springs.

Probably the only property in the country that is deeded to God, Healing Springs is a natural artesian spring that is visited daily for its cool, crystal clear, best tasting waters. Native Americans claimed that the waters had healing properties, hence the name. During the Revolutionary War, wounded British soldiers were left to die. They were nursed back to health with the help of the waters and the Native Americans. The soldiers were eventually healthy enough to rejoin their regiment in the Charleston area. Today, Healing Springs still attracts visitors locally and regionally to partake of the delicious waters, and enjoy the soothing shade of the trees surrounding the springs on the edge of the forest and swamp.

I have visited this site on many occasions since I first had a picnic here with my mom and brother in July 2005. The renowned Miller’s Bread Basket restaurant is three miles south in Blackville and well worth the drive!