Named for Anthony Ashley Cooper, chief Lord Proprietor of the Carolina colony, the Cooper River is one of the most historically significant rivers in South Carolina. It served as a main transportation route during the colonial period and played a crucial role in the development and success of early South Carolina plantations. The photo below was taken on the upper part of the river near Pimlico. 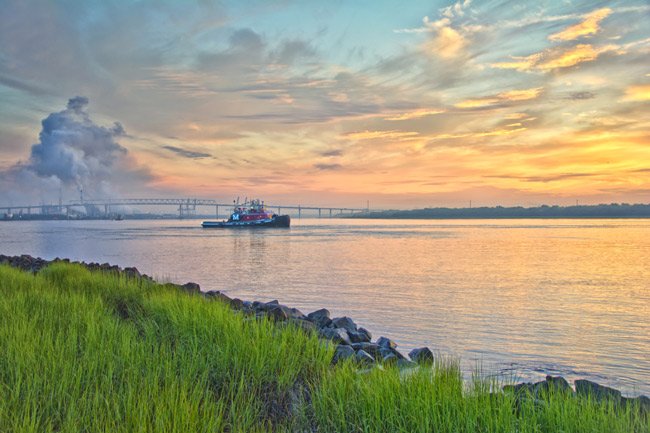 Donnie Smith of Moncks Corner, 2016 © Do Not Use Without Written Consent

Not all of scenes along the Cooper River are bucolic. The image above shows thick smoke billowing from a factory in North Charleston which stands on the bank of the river.

The Cooper River Historic District, which is a 30,020-acre section of the region centered along both branches of the Cooper River, is a remarkably intact historic and cultural landscape. In the mid-eighteenth century, the Cooper River served not only as a principal transportation route for plantation goods, services and people, but also played a vital role in the successful production of rice. In the nineteenth and early twentieth centuries most of the plantations in the district were acquired by wealthy Northerners looking for a warmer climate in which they could create hunting preserves for their own pleasure and leisure-time activities. These new owners left their mark on the landscape by building stately new residences but they also played an important role in preserving the earlier landscape. Many historic buildings, structures, and objects from the eighteenth, nineteenth, and twentieth centuries are still standing, and archaeological remains of settlements, machines, barns, and other structures that supported agricultural activity are generally intact. In addition, landscape features such as rice fields, banks, canals, dams, reservoirs or reserves, causeways, roads, avenues, upland fields, fence lines, and cemeteries – many of them present on eighteenth and early nineteenth century plats and maps – can be seen on the ground today. Numerous outbuildings are also included with several of the properties.

Reflections on the Cooper River