Pictured below is the grave of General Francis Marion, one of South Carolina’s most storied Revolutionary War heroes. The burial site is located on the grounds of Belle Isle Plantation in Berkeley County. Belle Isle belonged to General Marion’s brother, Gabriel. His own plantation, called Pond Bluff, stood about fifteen miles away. Today Pond Bluff is submerged under Lake Marion, named for the general. 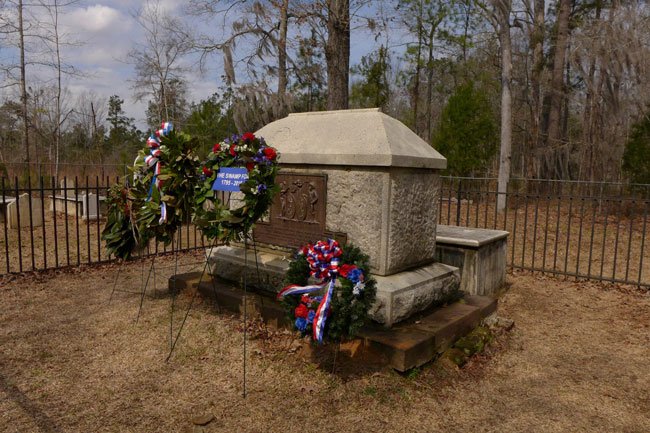 After the fall of Charleston in 1780, the Continental Army nearly ceased to operate in South Carolina. Marion distinguished himself as the leader of “irregular troops” – those who served without pay and supplied their own horses, arms, and food. He was an expert in guerrilla warfare and tormented British soldiers with stealth raids and attacks. 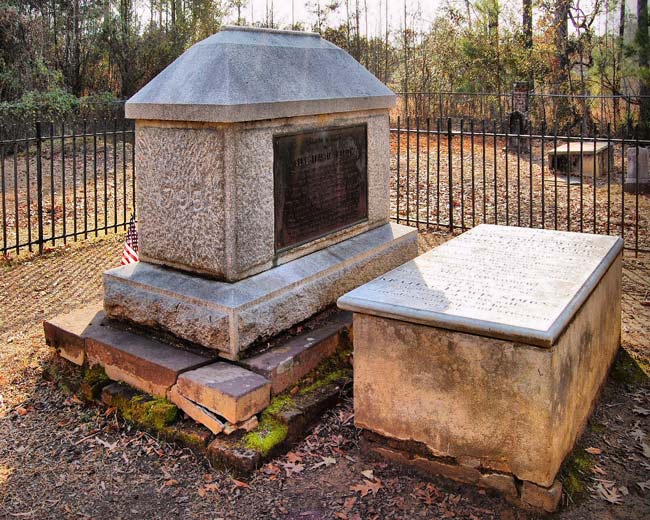 Tom Connor of Eutawville © Do Not Use Without Written Consent

Frustrated in his assignment to capture or kill Marion, British Colonel Banastre Tarleton spoke of his fear that he would never find “the old swamp fox.” The nickname stuck as Marion continued to elude the British by traveling through cypress swamps, hiding in thick forests, and acting on intelligence gathered from local Patriot sympathizers. 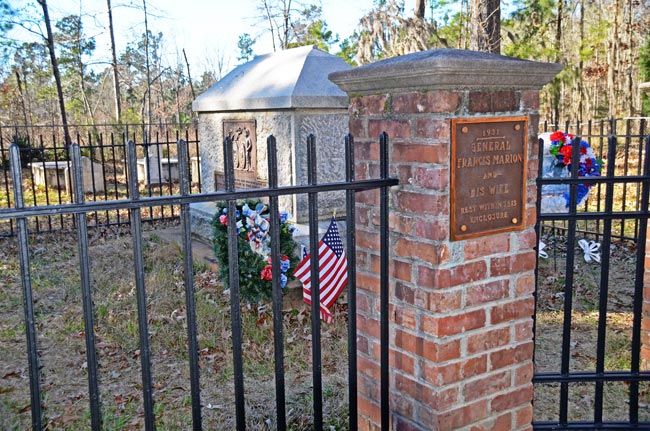 In 1893, nearly 100 years after Marion’s death on February 27, 1795, the South Carolina General Assembly replaced Marion’s crumbling tomb with this memorial, made of South Carolina blue granite. The inscription on his tomb reads as follows:

Sacred to the memory of Genl. Francis Marion, who departed this life on the 27th February 1795 in the sixty-third year of his age deeply regretted by all his fellow-citizens. History will record his worth and rising generations embalm his memory as one of the most distinguished patriots and heroes of the American Revolution which elevated his native country to honor and independence and secured to her the blessings of liberty and peace. This tribute of veneration and gratitude is erected in commemoration of the noble and gallant exploits of the soldier who lived without fear and died without reproach. 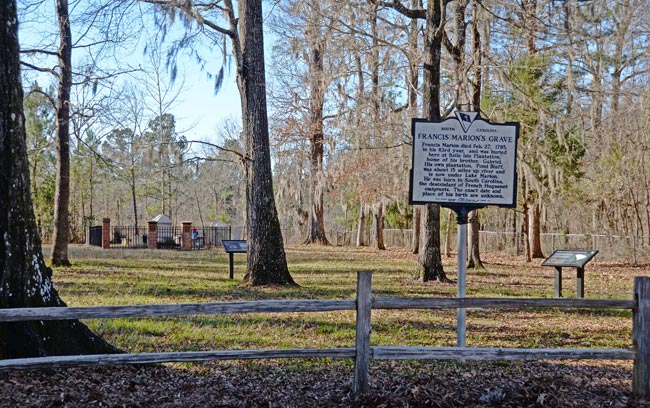 The cemetery is an historic site managed by South Carolina State Parks and open to the public. General Marion has many memorials throughout our state. There is a statue of General Marion in Johnsonville, as well as a Swamp Fox mural in Manning. In addition, numerous South Carolina places are named after him, including the City of Marion, the County of Marion, Francis Marion University in Florence, Marion Square in Charleston, Lake Marion, and the Francis Marion National Forest. The two latter sites extend throughout multiple counties. 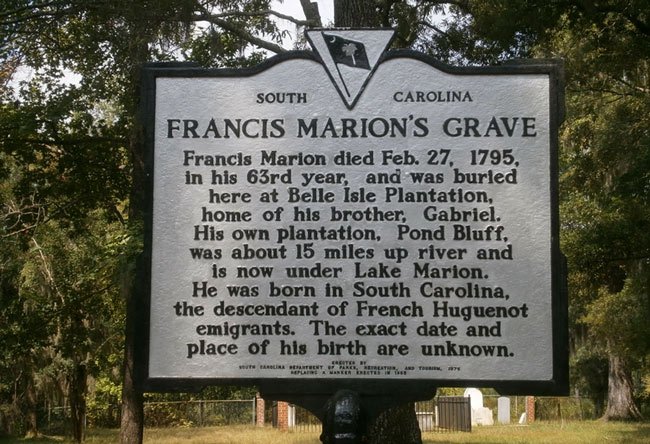 The land where the General Marion’s tomb stands was once part of Belle Island Plantation. The following information comes from Part XI of The Georgian Period: A Collection of Papers Dealing With “Colonial” or 18th-century Architecture in the United States, Together with References to Earlier Provincial and True Colonial Work, 1848-1917, published in 1902 by William Rotch Ware:

Belle Isle, the plantation of that illustrious soldier Francis Marion, though in wretched repair, is still to be seen by the occasional visitor who makes a pilgrimage to it. The place is now owned by one of General Marion’s descendants and namesakes. The house is practically deserted and the plantation is not always under cultivation. Though unoccupied and fast falling into ruins, the house is full of quaint old family relics, such as mahogany furniture in excellent designs, old books and old crockery, all left to dust and decay. 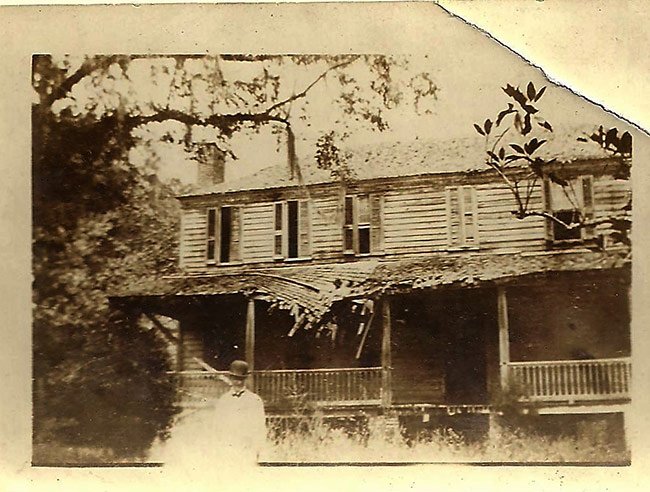 Photograph Taken by Audrey Keller Mann, 1927
Private Collection of Elizabeth F. Carroll of Eutawville © Do Not Use Without Written Consent

Note that Ware’s work erroneously referrs to the plantation as Francis Marion’s home. His home was actually Pond Bluff. Belle Isle was home to his brother, Gabriel, as mentioned above. The following article in the Intelligencer, dated February 28, 1889, provdes the most comprehensive information to date:

Belle Isle is itself a place of rare and romantic beauty. The style of the farm house comports with the antebellum residences of the wealthy planters of that neighborhood. It stands at the end of an avenue about a mile in length which leads to it from the broad high road that passes by old St. Stephens Church, Pineville and Big Camp, and the many plantations that lie in upper St. John’s parish. 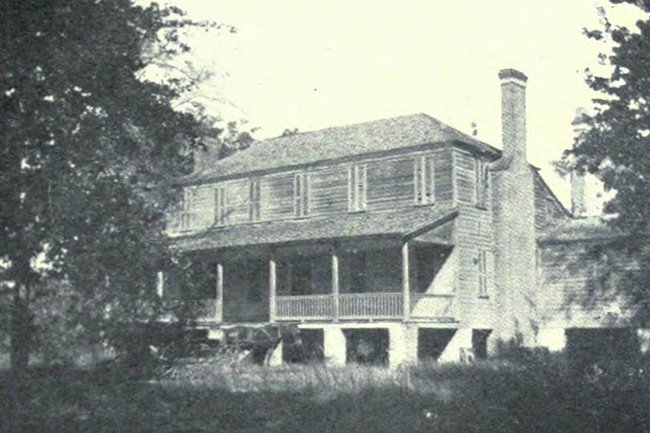 When the writers knew the place the house was shaded by live oaks, sycamores and cedars, while red birds fluttered in the Cherokee rose bushes, and the whole scene filled one’s idea of a picturesque Southern home. The walks of an ancient garden at the rear lead off into the dense foliage of the Santee swamp.

Then the place was owned and occupied by Walter Peyre Deveaux, whose inheritance it was; but the writer is given to understand that Mr. Deveaux has since removed and no one lives there now. The old homestead stands a monument to the general desolation of a country where nature is lavish. Some of the direct descendants of Francis Marion, who still bear the family name, reside in the neighborhood. 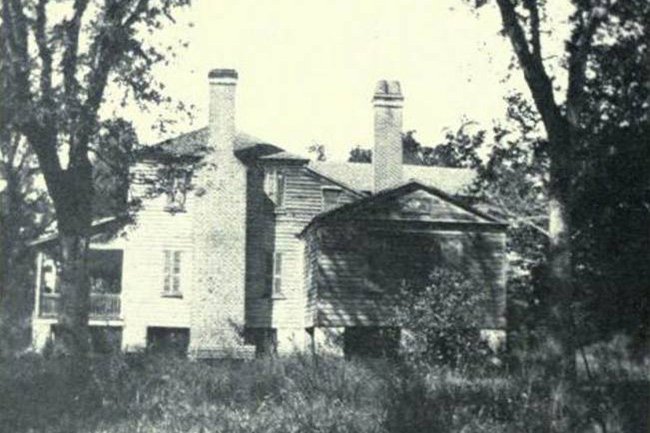 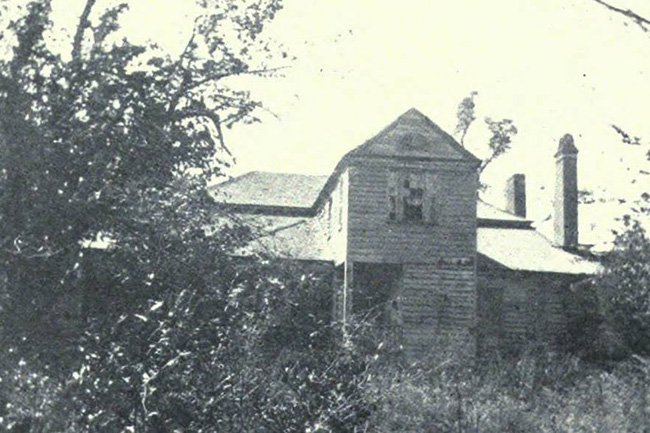 The article also mentions that the graveyard was located only about 100 yards from the front righthand corner of the home. The book by Ware contains perhaps the only known copy of a floor plan of the house at Belle Isle, as seen below.