The Santee River is the second largest river on the East Coast in terms of drainage and flow, surpassed only by the Susquehanna River which runs through several northeastern and mid-Atlantic states. At 143 miles long, the Santee River is formed by the confluence of the Wateree River and the Congaree River, which merge about 25 miles below Columbia, just before entering Lake Marion. Lake Marion was created in 1941 by the construction of the Santee Dam to provide hydroelectric power to rural communities in South Carolina as part of the New Deal. The Santee River was dammed in 1939 for this project.

Damming the river resulted in an increase of saline due to the river’s loss of freshwater and sediment flow, both of which diverted to the Cooper River following the project. During the 1980s the United States Army Corps of Engineers built a diversion canal to redirect some of the freshwater back to the Santee River to help restore its original ecosystem. The diversion canal is not to be confused with the Old Santee Canal, which was built in 1800 as a water transportation route. Though not completely rehabilitated, the Santee River environs were greatly assisted by the diversion canal. 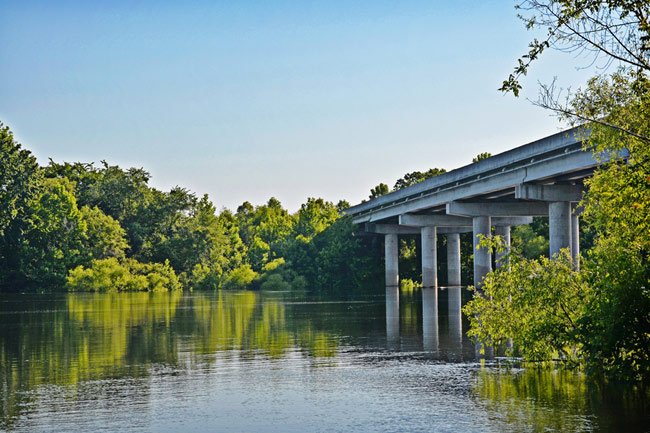 The river is named for the Santee tribe of Native Americans who lived along its banks prior to the Yemassee War. During the late seventeenth century a group of French Huguenots established a village along a bluff overlooking the Santee River, and their settlement became informally known as French Santee. The Huguenots gave their new home the name of Jamestown and eventually formed the St. James Episcopal-Santee Church. The historic Jamestown settlement is longer extant; the current Jamestown was formed in the twentieth century near the original village. Revolutionary War hero General Francis Marion also lived by the Santee River. Marion’s family home was flooded during the construction of the lake that bears his name.

As the river flows southeast, it forms the northeast boundary of the Francis Marion National Forest, an area of nearly 259,000 acres that includes protected plants and wildlife. About 10 miles before emptying into the Atlantic Ocean near Georgetown, the river branches into two parallel channels, the South Santee River and the North Santee River. These two channels are separated by Cedar Island. Two miles wide, Cedar Island is part of the Santee Coastal Reserve.