The Wannamaker Seed Company building in St. Matthews has an agricultural history dating to the eighteenth century when Wannamakers settled in Orangeburg in 1732 and began farming. During the forming of Clemson College (now Clemson University) at the end of the nineteenth century, John Wannamaker, a farmer from St. Matthews who was interested in the science of agriculture – particularly breeding cotton seed – helped organize the agricultural school, which opened in 1888. Wannamaker served as Clemson’s first Chairman of the Board of Trustees and became a lifetime board member, serving from 1888 through 1935. 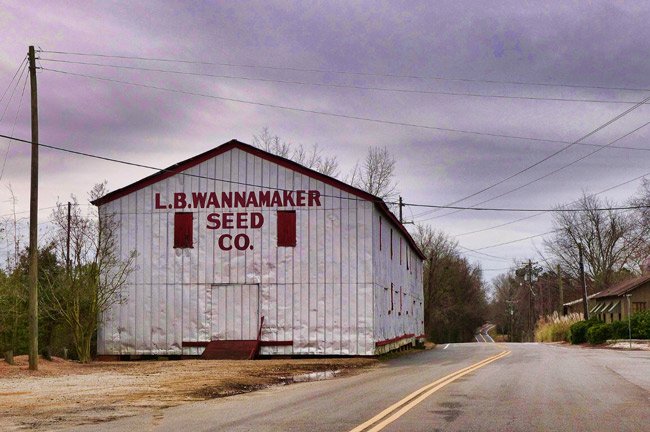 Experimental farming continued with Wannamaker’s son, John E. Wannamaker, who is credited with introducing soybean crops to the South. Wannamaker cousins also ventured into cotton seed breeding, among other projects, and by 1916 the Wannamaker Seed business began to take shape. During the 1930s the business became two separate companies, W.W. Wannamaker Seed and L.B. Wannamaker Seed. L.B. Wannamaker Seed, seen here, focused on cotton until 1966 when Luther Wannamaker joined his father’s business and began concentrating on soybeans. L.B. Wannamaker Seed then became global soybean company, selling desirable varieties of soybean to Japan. However, today its primarily focus on Southern Wildlife Seed, though it also continues to grow and market a variety of specialty seeds such as edamame soybean seed, cover crops, and onion seed.