South Carolina’s ACE Basin encompasses over 1,000,000 acres between Beaufort and Charleston and even stretches up to Orangeburg County and Bamberg County. As of 2015, 217,156 acres of the ACE Basin are protected. Through a joint effort by numerous federal, state, and local agencies, as well as conservation organizations and private landowners, the basin is one of the largest protected estuarine systems on the East Coast. It provides a safe haven for wildlife and remains a buffer from encroaching development. The ACE Basin gets its name from the three waterways that flow through its varied landscape: The Ashepoo, Combahee, and Edisto Rivers. 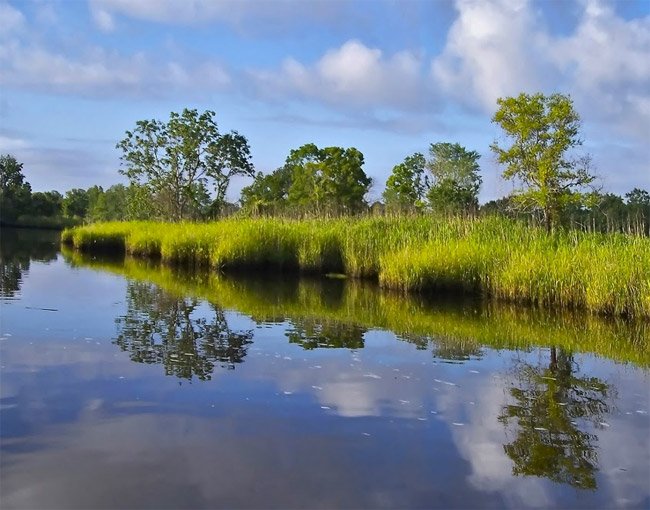 Prior to the Civil War, much of the ACE Basin was planted with rice. Nowadays, many of the hiking opportunities in the area make use of former rice field embankments or dikes, providing visitors a nice flat walk with numerous opportunities to spot wildlife. Winter provides visitors with a wonderful opportunity for wildlife viewing, as many migratory birds call the ACE Basin home during the colder months. 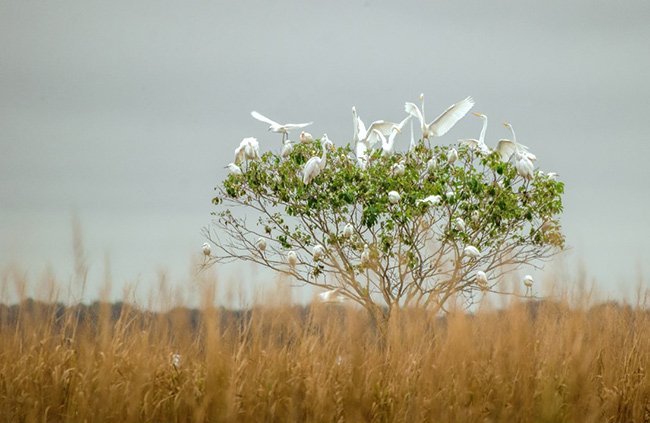 Sue Roberts of Kershaw, 2018 © Do Not Use Without Written Consent

Many of the private properties protected in the ACE Basin include historic rice plantations. Cheeha-Combahee Plantation, seen below, is located on the Combahee River in Wiggins and is an example of one of the properties purchased during what was known as the Great Northern Migration. Just before the Great Depression, many of the plantations in the Lowcountry were purchased by wealthy Northerners for use as hunting preserves as Southerners had fallen on hard times after the Civil War. The new owners are largely responsible for protecting these historic properties from further subdivision and demolition. Cheeha-Combahee has 12,500 acres of protected property with an easement held by Ducks Unlimited. 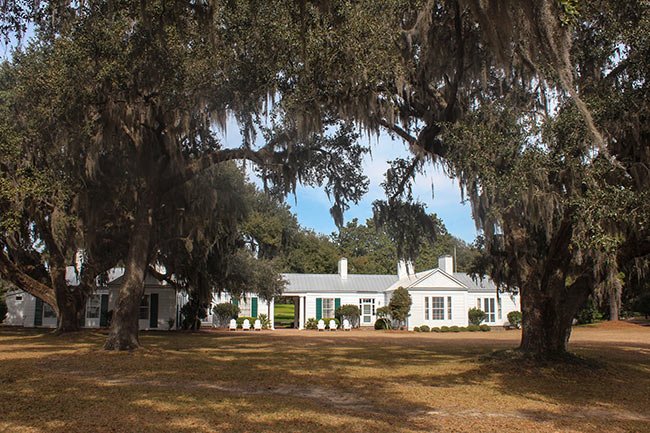 Mills Morrison of Savannah, GA, 2019 © Do Not Use Without Written Consent

The Bear Island Wildlife Management Area, which is about 11 miles south of US 17 on Bennett’s Point Road, provides 12,000 acres of managed property for wintering waterfowl and other wetland wildlife. The area is open to the public and is a great stop on an ACE Basin roadtrip. 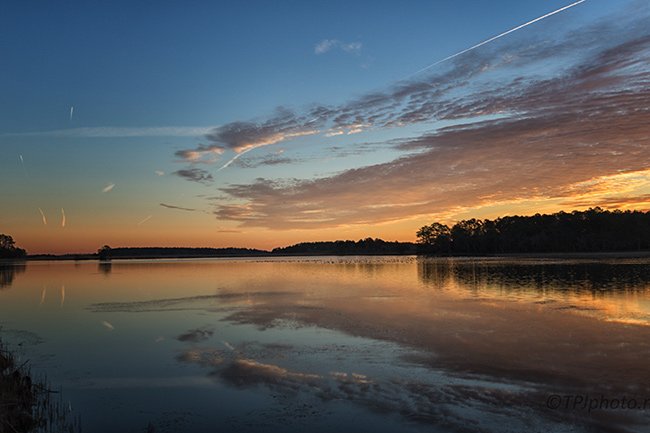 Further down Bennett’s Point Road, there is a peaceful community in the heart of the ACE Basin. Docked at Bennett’s Point boat landing, you may find the lovely shrimp trawler pictured below. 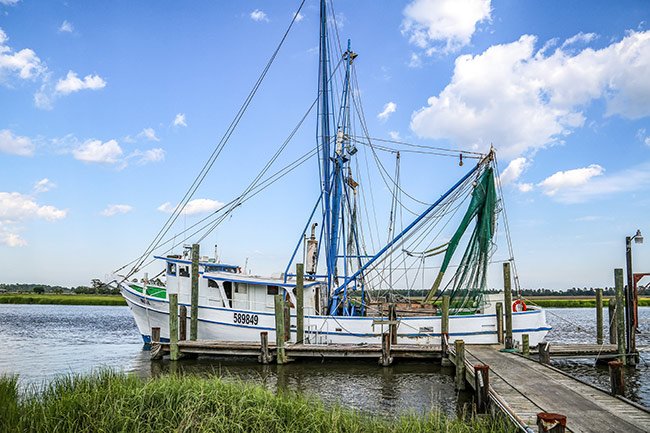 David Thompson of Anderson, 2018 © Do Not Use Without Written Consent 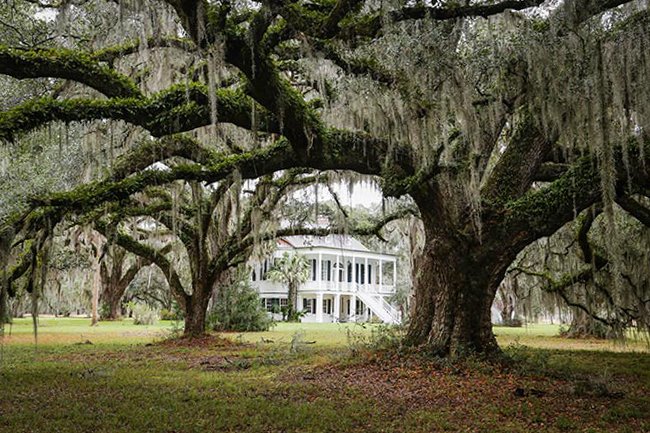 Its erstwhile rice fields, untouched since the Civil War, help create the diverse ecosystem found within the refuge. The plantation’s 1828 home – one of only three antebellum plantation homes in the ACE Basin to remain intact after the Civil War – now serves as the refuge’s headquarters. 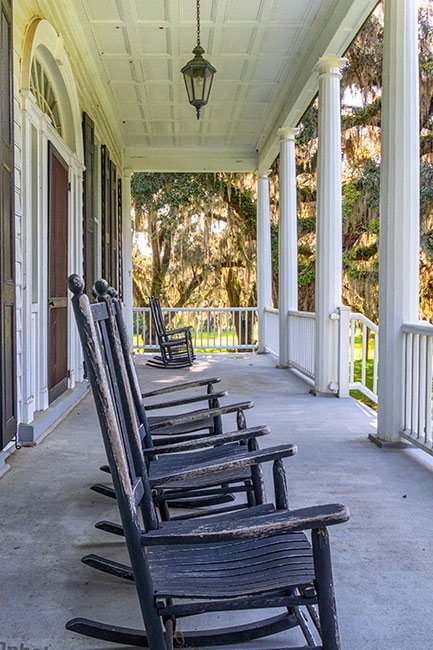 The rice trunk seen below demonstrates how slaves controlled irrigation of the rice fields, which was dependent on tidal rivers. Rice, a particularly labor-intensive crop, was dependent on slaves for its cultivation. Following Emancipation, the rice industry collapsed in the absence of forced labor. 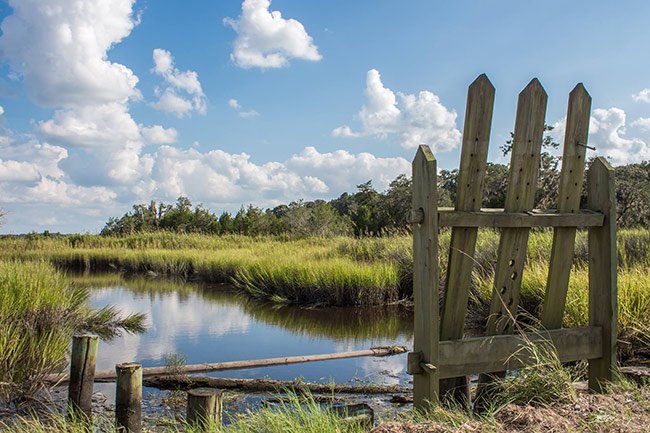 After the war the acreage was purchased by wealthy sportsmen for hunting grounds, and the land remained pristine and well-managed by its new owners throughout the years. The plantation was purchased by The Nature Conservancy in 1991, who sold it to the United States Fish and Wildlife Service the following year to be managed as a wildlife refuge. Both natural and cultural history are preserved at the refuge. The antebellum house, rice fields, and rice trunks tell the story of rice culture and slave life on a Lowcountry rice plantation. The image below shows what is thought to have been the plantation manager’s office, which was built in 1929 during the ownership of Mr. Owen Winston, the one-time President of Brooks Brothers. 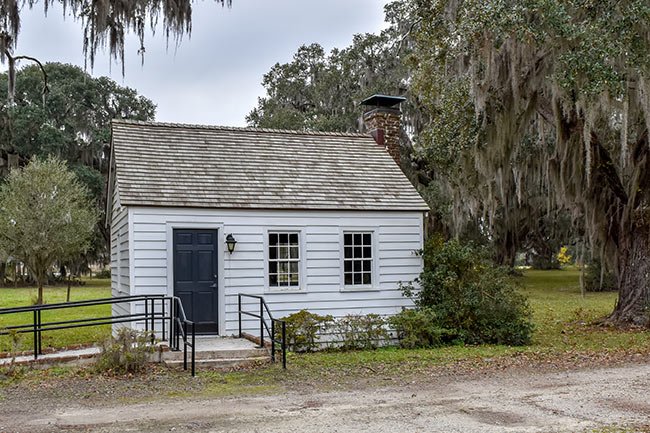 Orin Blomberg of Olympia, WA, 2017 © Do Not Use Without Written Consent

The Ashepoo River flows through the swamps of Colleton County and its basin comprises the “A” in ACE Basin Wildlife Refuge. The name Ashepoo comes from the Ashepoo Indian tribe. 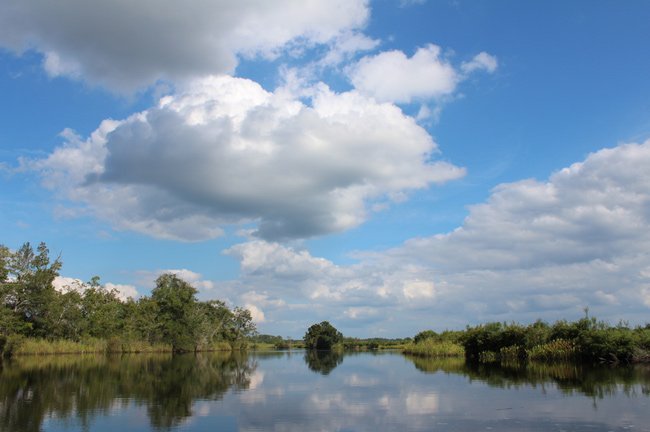 Crosby’s Landing, pictured below, was a well-loved landmark located on the south side of the US 17 bridge over the Ashepoo River; it was destroyed when that portion of 17 was widened by the South Carolina Department of Transportation. 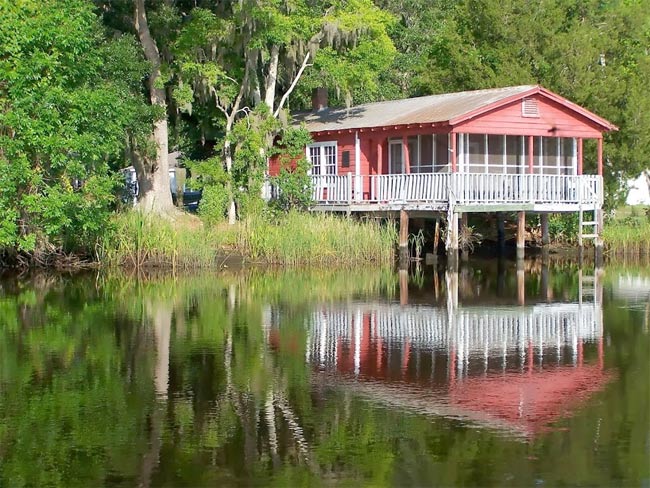 The photo below depicts the old store known as B.J. Brant General Merchandise, named for its owner. The store has a sign indicating that the post office was located here for the community around Ashepoo. The inclusion of a post office within a general store is typical of rural areas, and these buildings almost always served as community gathering places as well. The photo was captured during the Works Progress Administration’s documentation as part of the Federal Writers’ Project between 1930 and 1940. 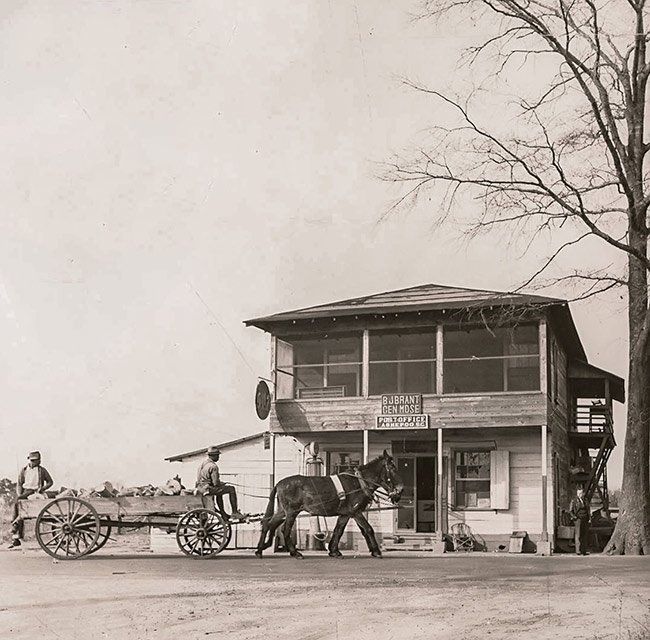 The photo below shows the Ashpeoo Depot, which was the passenger station for people traveling by train, a predominant mode of transportation in South Carolina in the late 1800s to the mid-1900s. The depot is no longer standing. 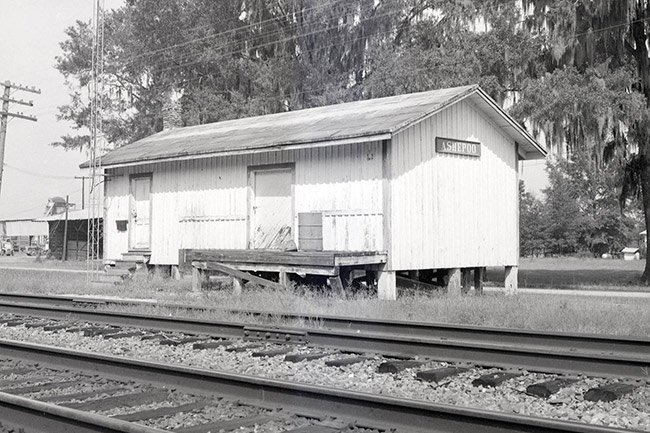 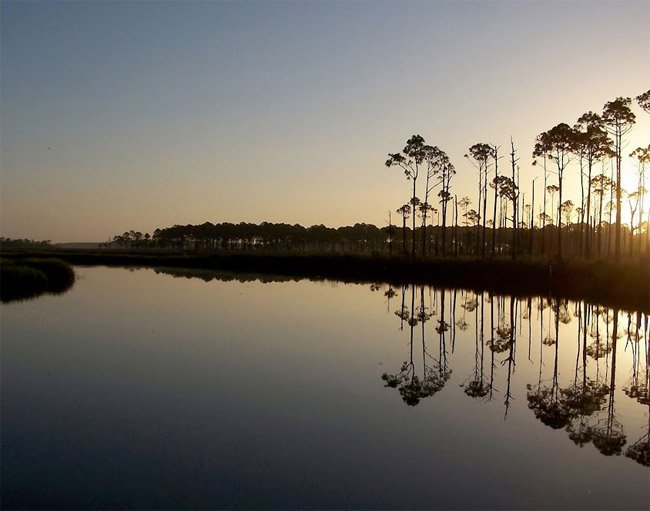 These two streams meet below Walterboro and form the Combahee River, which then rolls into St. Helena Sound above Beaufort. 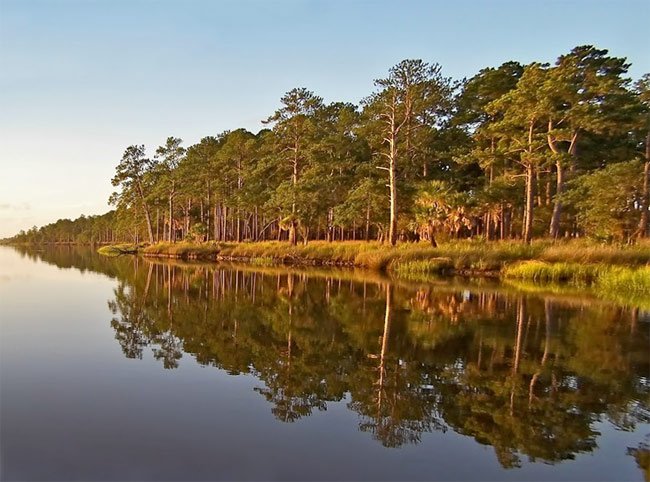 This blackwater river makes up the “C” portion of the ACE Basin Wildlife Refuge and was named after the Combahee Indian tribe. 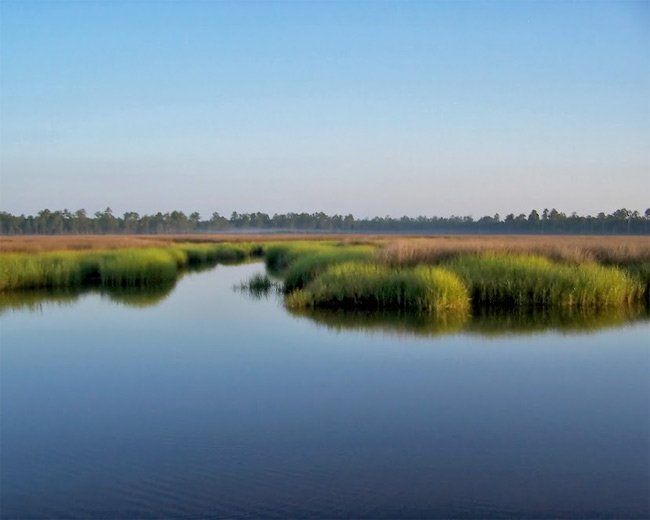 Barry Gooch of Port Royal, 2009 © Do Not Use Without Written Consent

In a historic event known as the Combahee Ferry Raid, three small United States Navy ships, transporting 300 men from the 2nd South Carolina, commanded by Colonel Montgomery, along with the 3rd Rhode Island Heavy Artillery controlling the weapons, left Beaufort heading towards the Combahee River, Harriet Tubman accompanied the troops. Tubman, along with 150 African-American Union soldiers, freed more than 750 slaves on the night of June 2, 1863. Pictured below is a landing on the Combahee River, at the foot of a bridge named in Tubman’s honor, is the general area historians believe where the freeing occurred. Tubman escaped slavery in 1849 and became the first woman to lead a major military operation in the country. She went to work on similar missions with the Massachusetts 54th Infantry and spent her final years of life tending to wounded soldiers. 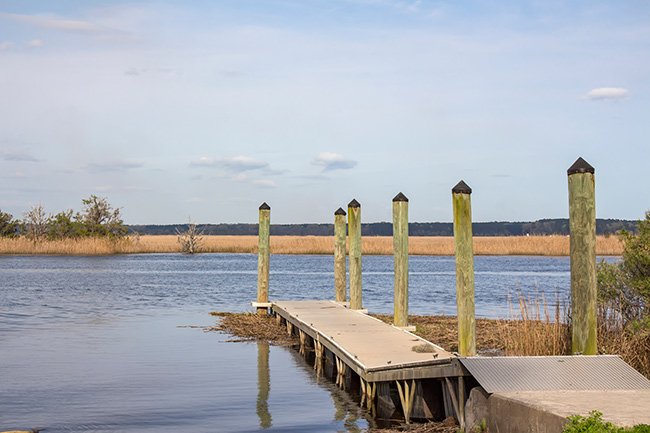 At 206 miles long, the Edisto River is the longest blackwater river in North America. The river begins in Saluda County and flows down the state, finally emptying into the Atlantic Ocean. The ACE Basin rests at the mouth of this amazing water system. 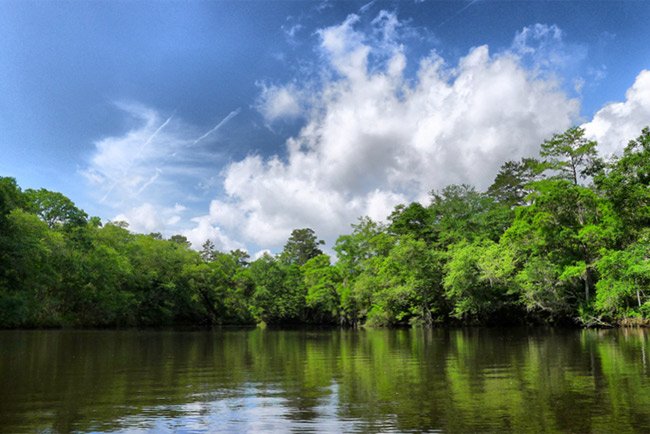 Reflections on the ACE Basin

Contributor Brittany Callahan, who captured the photo below of Grove Plantation, shares: “I took this while on an adventure driving through the ACE Basin. I felt very alone on the property, which was both eerie and peaceful. The highlight of my visit was seeing a family of wild boar on the way back to my car! This image was made using a large format film camera- similar to those used during the plantation’s heyday.”

Brittany Callahan of Charleston, 2014 © Do Not Use Without Written Consent

Why This Site Matters To Me