Over the decades this building on Edisto Island has served many functions, ranging from selling merchandise to serving meals. The weatherboard structure, built before 1825, is believed to be the only antebellum commercial building on the island. It originally stood on Edingsville Beach, a popular resort near Edisto Beach that was abandoned during the Civil War after being overtaken by Union troops. In the 1880s, the building was moved to its present site on Store Creek by brothers Joseph and William Stevens, though it faced in the opposite direction at the time. Those buildings that remained on Edingsville Beach were lost to a hurricane in 1893. 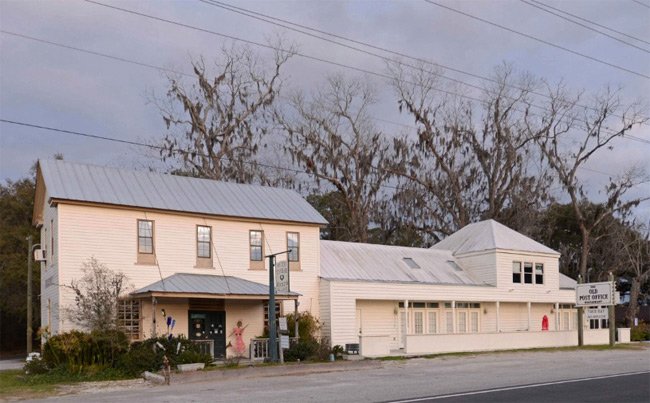 The building was moved in two parts and then reassembled and used in conjunction with a cotton gin also on Store Creek. A general store operated from a house southeast of the cotton gin – known now as the Bailey Plantation House – by the home’s owner, Judge Sandifer Holmes. Founded circa 1820, the store was located on the ground floor of the house and continued operations under Augustus Stevens, who eventually bought the property and also oversaw the cotton gin. The property was eventually sold to the Baileys, and in 1882 Mr. F.M. Bailey acted as the area’s post master while running the store and gin with Stevens. Bailey married Stevens’ daughter Mary Gertrude Stevens, and the couple moved into the home.

In 1907 the Baileys moved the store to this building. Some say the post office operated from here until around 1940; other sources claim the post office operated from a small frame building on the property of postmistress Jennie Stevens Wescott and wasn’t moved here until well into the 1940s. Either way, when South Carolina Highway 174 was built behind the store in 1937 as part of a highway alignment project, the facade was turned to face the new road. Subsequently, a one-story addition to the store was built to house the post office, which eventually relocated to that space.

After Mrs. Bailey died in 1980, the property left the family and the post office was relocated to another site. The original post office was torn down, and a new building was added in its place in 1988 as a restaurant called the Old Post Office. The restaurant had a successful run before closing in 2006. Many locals and visitors were disappointed that the popular restaurant closed, but new owners purchased the building and reopened the restaurant in 2009. Today the Old Post Office Restaurant continues to welcome guests to its storied halls for a delicious meal, while a gift shop and gallery operate from the former store space.

Bailey’s Store is listed in the National Register:

Bailey’s Store has significance as one of the last, if not the last, surviving commercial buildings on Edisto Island from the nineteenth century. It is thought that this building was built before 1825 on Edingsville Beach, a popular antebellum seaside resort off Edisto Island, and moved to its present location ca. 1870, in reaction to that beach’s abandonment during the Civil War. Thus, it is one of very few pre-war relics from Edingsville, for all remaining structures were swept into the ocean in the hurricane of 1893. The building was moved in two parts to Store Creek, and placed together again, to be used in connection with a gin house already on that location.

Bailey’s Store is a two-story, weatherboard clad, rectangular, side gabled roof building which at one time faced 180 degrees in the opposite direction, but when Highway 174 was moved in about 1940 was turned around. For many years the Edisto Island Post Office was located in a one-story shed roof addition on the south elevation, which has recently been removed. A hipped roof covering extends from the western elevation, suspended over the front door. The fenestration of the façade is asymmetrical and is composed of three bays on the first story and five bays on the second story. There is also a one-story, hipped roof addition at the rear.