Along with Fort Moultrie and Battery Thomson, Battery Gadsden is one of a series of citadels guarding the Charleston Harbor along the shores of Sullivan’s Island. Construction on the fortification began in 1904 and was completed in 1906 as an Endicott Period Fort. The Endicott Period, named for United States Secretary of War William C. Endicott, began in 1890 and lasted through 1910. Secretary Endicott headed the Board of Fortifications, which sought to construct batteries and other defenses in order to protect the United States coastline on all sides. The endeavor followed an 1885 study, commissioned by President Grover Cleveland, which revealed weaknesses in the country’s harbors. 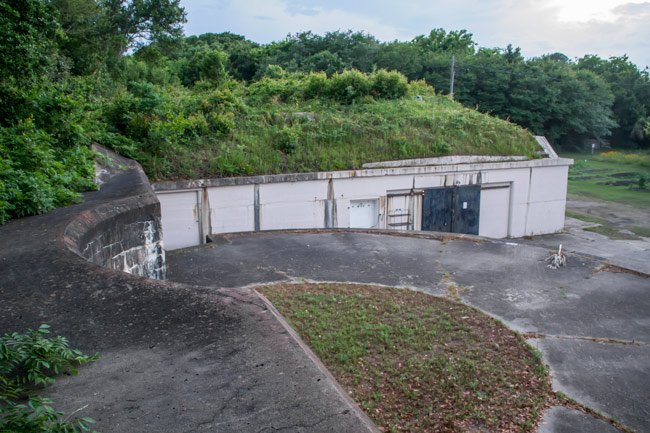 Battery Gadsden is named for Revolutionary War Brigadier General Christopher Gadsden, who also led the Sons of Liberty, an American Patriot organization. Today Gadsden is best known for his association with the phrase, Don’t tread on me, and an accompanying yellow flag which depicts a rattlesnake in striking position. This image appeared on drums belonging to America’s very first company of Marines, which formed in Philadelphia. Gadsden, who served in the Second Continental Congress as a member of the Marine Committee, presented a matching flag to Commodore Esek Hopkins to distinguish his ship from others in the Navy’s infant fleet. He also presented the flag to the Congress of South Carolina a year later, in 1776. 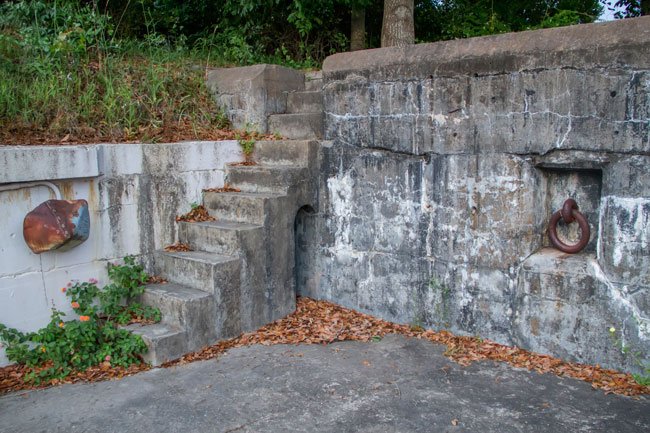 Gadsden’s namesake one-story concrete battery with four six-inch guns boasts walls that are two-feet thick. The wall facing the ocean, now obscured by Sullivan’s Island Elementary School, stands seven feet high. The fortification was decommissioned in 1917, and all artillery and machinery were removed for service in France during World War I. 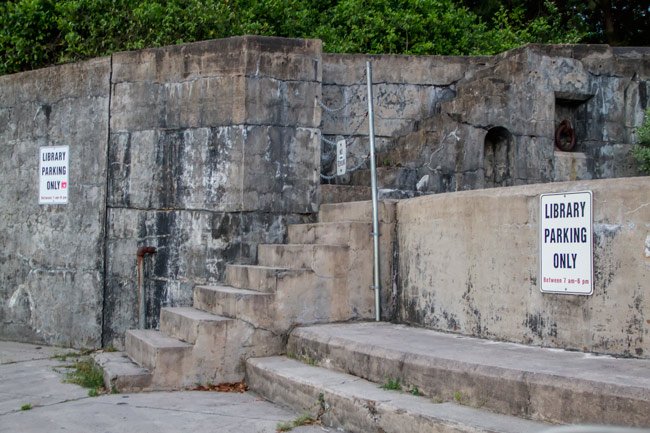 A part of the battery was restored and opened as a branch of the Charleston County Public Library in March of 1977. The island library is called the Edgar Allan Poe Branch in honor of the nineteenth-century writer who was stationed at Fort Moultrie from 1827 through 1828. He wrote his story The Gold Bug from Sullivan’s Island, along with The Balloon Hoax and The Oblong Box. In 1992, Sullivan’s Island resident Make Macmurphy founded the Battery Gadsden Cultural Center within another section of the historic fort. The cultural center leased part of the structure from the Town of Sullivan’s Island until 2013. Today a group is attempting to reopen the center within Battery Gadsden.

Battery Gadsden is listed in the National Register:

Battery Gadsden constructed 1903-1904 by G.P. Howell, is one of a series of batteries stretching from Fort Moultrie on the west to the eastern end of Sullivan’s Island. Charleston Harbor has always had some form of fixed harbor defense beginning with Fort Johnson in 1708 and culminating with the construction of these batteries in the fortification of Sullivan’s Island at the mouth of Charleston Harbor. This four, six inch gun, coastal defense battery was built to protect Charleston Harbor. The battery, approximately 377 feet long and 84 feet wide, consists of two sections: the glacis and the armament complex. The glacis is a relatively smooth, slightly sloping area on the sides and front of the battery which protects the armament complex from bombardment. The armament complex consists of four recessed disappearing gun platforms or foundations, the loading platforms, ammunition hoists (one per gun) and various staircases or ramps for access. The front or ocean side of the battery is approximately 7 feet high. Walls and ceilings are of concrete. All guns and machinery were removed in 1917.