This beautiful sunset view of downtown Charleston was taken on Broad Street. Historic St Michael’s Church can be seen in the background. St Michael’s is the oldest church structure in Charleston. A small wooden church originally stood here in the 1680s, and was one of the first churches in the new settlement of Charles Town. About 40 years later the parish had grown too large, and a more spacious one was built down the road. The parishioners began worshiping at the new church, and the cornerstone for St Michaels church was then laid down where the old wooden one once stood. 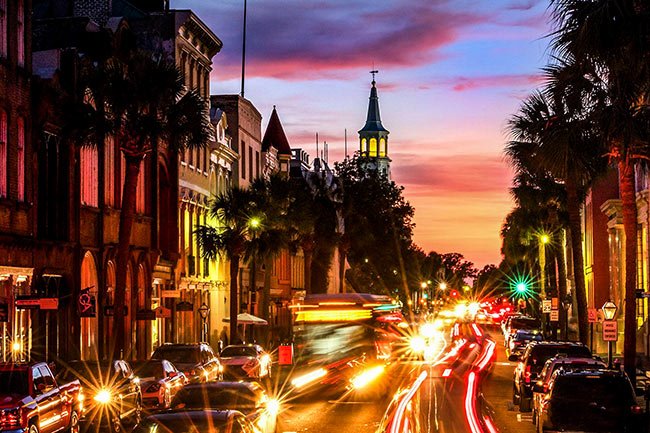 Jim Hasapis of Charleston, 2018 © Do Not Use Without Written Consent

Construction on St Michael’s was completed in 1761. The church is perhaps best known for its beautiful chiming bells and 18th-century clock tower.

Broad Street is the main business center of downtown Charleston, and many successful lawyers, bankers, shop owners, and realtors are located here. The well-known street divides the historic area in half, but among natives, it has another more humorous meaning. In the past, those who lived South of Broad street were nicknamed “SOBs,” and those Slighty North of Broad street were jokingly called “SNOBs!” 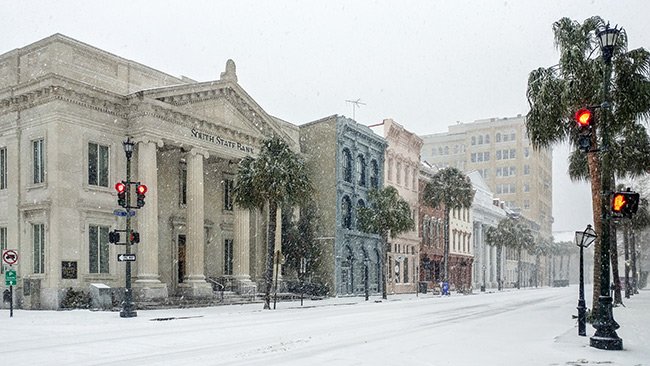 Kim Howard of Murrells Inlet, 2018 © Do Not Use Without Written Consent

Angela Easterby-Smith of James Island took the picture below in December 2007, after having a terrible day at work. She says that “on my way home that evening, I was greeted by the most amazing sunset I have ever seen! It was so breathtaking that I pulled over, got out of my car and was thankful that I happened to have my camera with me that day! Although the photo shows the beautiful colors of the sunset &#8211; it still does not do justice to how incredible the view was! I knew I wasn’t the only one admiring it as I saw many other drivers pulled over, staring at the sky.”