This iconic Carpenter Gothic church was built in 1893 and is thought to be the first black church in Charleston both founded and constructed by African-Americans. Central Baptist Church was organized in 1891 by members from Morris Brown AME Church, another nearby black church. The congregation of Central Baptist Church employed African-American architect John P. Hutchinson to design its edifice, now a fixture of Charleston’s landscape. 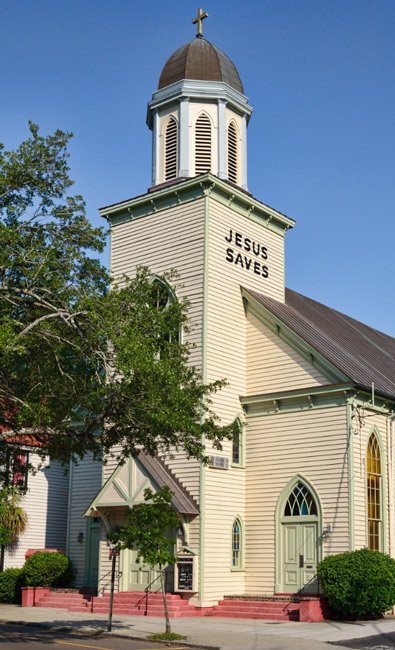 Aside from the bell tower, the church is a meeting house-style building with Gothic-style arched windows. The bell tower was originally octagonal, but it was replaced in 1950 with the current square tower. The octagonal belfry is capped with a dome and cross. Probably the most eye-catching exterior feature of the church is the phrase, Jesus Saves, painted on the tower in block letters.

The church’s interior is even more memorable. The walls and ceiling are painted in murals depicting scenes of the life of Christ by Calcutta, India native Amohamed Milai. Members of the congregation met Milai in 1912 during a South Carolina Missionary Baptist Education convention in Greenville. Milai had recently converted to Christianity, and he bartered with the church for a scaffold and room and board for his family in exchange for the mural, which he completed in 1915. Today the murals are considered an important piece of folk art and were restored in 2002.

Though the church was damaged during Hurricane Hugo in 1989, the building was repaired. The church remains active, and its historic sanctuary is open to the public.

Central Baptist Church is a National Historic Landmark and is listed in the National Register:

Central Baptist Church (ca. 1893) is significant in terms of black history and folk art. Locally, it is thought to be one of the first black churches to have been founded and built solely by blacks in Charleston. The church was founded in 1891 by a group from Morris Street Baptist Church, an older church in Charleston. Two years later the present structure was completed and first used by the congregation in August 1893. During its first 20 years the church grew and this growth is reflected in the addition of the notable murals of 1915. The church is an excellent example of the Carpenter Gothic vernacular style of architecture. Outstanding features of this church which are indicative of the style and period are the central double doors with protective hood above, octagonal belfry and dome, tower window with plate tracery, interior gallery on three sides, and Milai frescoes and murals depicting scenes of the life of Christ, signed by the artist Amohamed Milai in 1915. The gable roof is covered with standing seam tin and the boxed cornice features decorative brackets. The Adult Education Building to the right of the church is a typical Victorian “single house” of the period and is included within the nominated acreage.