The Charleston Gas Light Company was chartered in 1846. Its first building was located on Church Street between Market and Cumberland streets, but it relocated to this building, located on Meeting Street, three decades later, in 1878. Designed by E.B. White – the architect behind such notable Charleston structures as the French Huguenot Church and Grace Episcopal Church – the building is flanked by the wrought iron gates that adorned the original Church Street site. 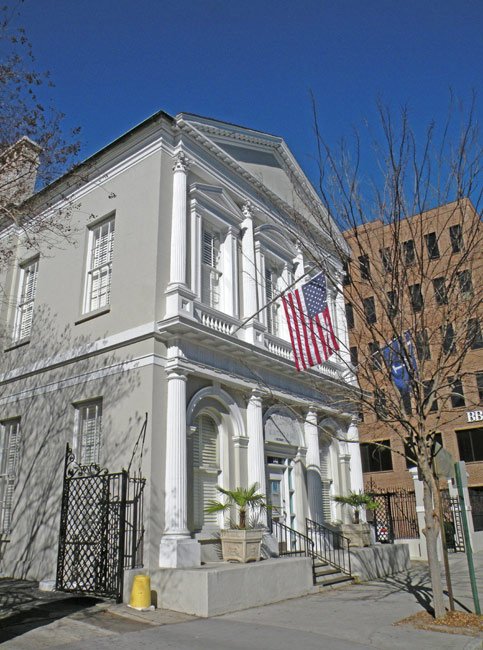 The Charleston Gas Light Company later became the South Carolina Power Company, which was acquired by South Carolina Electric and Gas in 1948. SCE&G’s administrative offices occupied this Palladian-style building until June of 2015. The company closed its downtown Charleston building that summer due to low customer usage. The future of the historic building, which is still owned by SCE&G, remains uncertain.

The Charleston Gas Light Company is listed in the National Register as part of the Charleston Historic District:

(Charleston Old and Historic District) Charleston played an important role in Colonial, Revolutionary, antebellum and Civil War America. The city was a major Colonial seaport, an active participant in the Revolution, a seat of rice and cotton culture and a leader of secession. Today much of the nation’s great social and architectural history can be visibly appreciated because of the great concentration of period buildings that still line the city streets. The historic district contains primarily residential buildings in addition to commercial, ecclesiastical, and government-related buildings. Several historic neighborhoods are included because of their concentrations of historically and architecturally valuable buildings. These neighborhoods possess the unique visual appeal of old Charleston, a picturesqueness created by the close proximity of buildings, in a wide variety of architectural styles.

There is general harmony in terms of height, scale, proportion, materials, textures, colors, and characteristic forms, such as the side piazzas. All of the properties contribute to an expanded period of significance dating from 1700 to 1941. The great concentration of 18th and 19th century buildings give the district a flavor of an earlier America. The district contains many buildings of national historic and/or architectural significance. Built of brick, stucco, or clapboard, many of these properties are Charleston “single houses,” one room wide, with gable end to the street and tiered piazzas. Others are plantation style houses. Architectural styles include Georgian, Regency, Federal, Adamesque, Classical Revival, Greek Revival, Italianate, Gothic Revival, and Queen Anne, among others. The district also contains many outbuildings (stables, carriage houses, kitchen buildings), a majority of which have been altered extensively to accommodate modern needs.