For decades the tire swing that hangs from the beloved Deerhead Oak in McClellanville has invited children to oscillate beneath the tree’s massive boughs. The live oak (Quercus virginiana) is a living symbol of the town, dating back many generations. In fact, merchant William Peter Beckman opened his store under this tree at the end of the Civil War, during a time when planters were abandoning their rice fields to move into town. From that point, the village of McClellanville increased both in commerce and population. The greenspace behind the Deerhead Oak remains in the Beckman family. 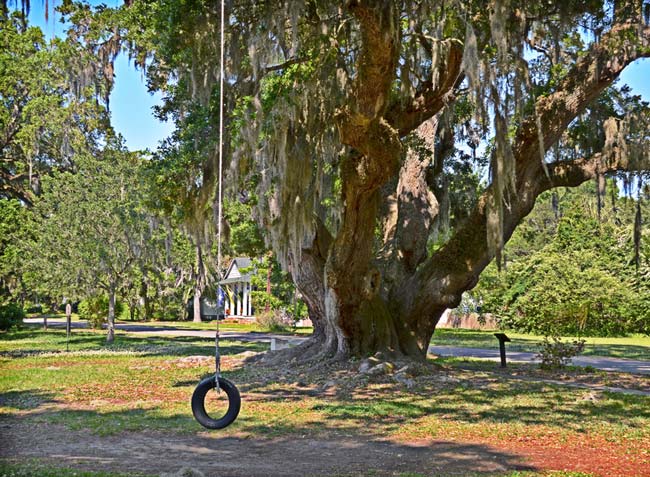 While not as spectacular as the infamous Angel Oak that stands on Johns Island, the trunk of the Deerhead Oak is larger in circumference – coming in at 30.6 feet compared to the Angel Oak’s 25.5 feet. The tree came by its name as observers claim to see the image of a deer’s face in the bark with forked limbs appearing as antlers. The Deerhead Oak was named the 2007 South Carolina Heritage Tree of the Year by the South Carolina Urban and Community Forestry Council. It is protected by the town’s tree committee, which assumed custody of the tree in 1999.

McClellanville resident James O. McClellan composed the following poem, Voice of the Deer Head Tree, and recited it at the May 10, 2008 ceremony that honored the Deerhead Oak as the 2007 Heritage Tree of the Year:

A giant oak stands in the town,
Its known as the Deer Head Tree.
Surely the oldest living thing
Within our community.

For centuries rooted in place,
Watching the seasons pass.
No telling just how old it is,
Or how long yet it may last.

I sometimes wonder if this old tree
Had senses and wit ad tongue,
What stories it might tell us,
Of events since it was young.