Folly Beach County Park sits on the isolated west end of Folly Island. After Hurricane Irene swept the beach in 2011, the park closed due to severe erosion as a result of the storm.

Since then, the Charleston County Parks and Recreation Commission has restored the park by building a terminal groin and delivering 175,000 cubic yards of sand to the beach. Folly Beach County Park reopened on July 3, 2013, in time to receive holiday beachgoers.

The photo below shows Bird Key in the distance. This small sandspit between Folly Beach and Kiawah Island is a bird sanctuary which provides habitat and protected nesting for a variety of shore birds, including brown pelicans, blackskimmers, and royal terns. The South Carolina Audubon Society designated Bird Key as an “Important Bird Area” in 2004. Visitors may access Bird Key by boat anytime except nesting season, which is April 1 through October 15.

Folly Beach County Park consists of 2,500 feet of shoreline. For those who prefer to spend time on the Folly River, the park also provides 200 feet of access on the river. Certified lifeguards are on duty at a designated swimming area on the oceanfront during the summer season. 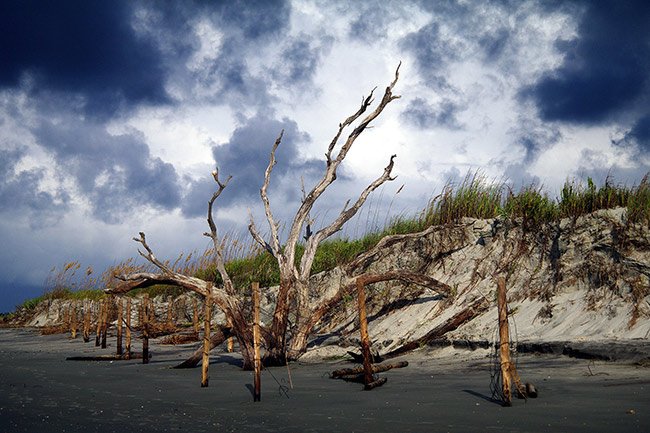 Fredric Durrette of Charleston, 2015 © Do Not Use Without Written Consent

For a convenient day at the beach, the park offers amenities to daytrippers such as showers, restrooms, and a seasonal beach shop and snack bar. Beach chairs and umbrellas can also be rented for the day, allowing more space in the car for sand toys. Though highly populated during the summer months, the park remains a place of natural beauty.

It is often hard for guests to believe that they are within the boundaries of a county park when faced with spectacular scenes of the Atlantic Ocean, the Folly River, a bird sanctuary, and maritime trees. Folly Beach County Park is the perfect spot to while away the day at one of the state’s most beloved beaches.

Mark VanDyke, who contributed the photo below, notes: “Chronic erosion along Folly Beach occurs in large part because of the Charleston Harbor. The commercial dredging operations prevent natural sand buildup and migration to Folly Beach, causing need for numerous hard structures along the island in an attempt to retain what sand is already present. Perhaps the area that experiences the greatest erosion is the Folly Beach County Park on the west end of the barrier island. Several coastal trees stand inundated and trapped in the tides and tidal pools of the Atlantic Ocean. Every year I take a trip to Folly Beach where I find this area to be completely different in appearance, sometimes displaying the most beautiful tidal mud flats – a result of the nearby Folly River – and sometimes providing beautiful calm tidal pools to reflect the coastal trees caught in this dynamic system of change. On this particular evening, the blues of dusk provided the perfect color to silhouette and reflect this coastal tree.” 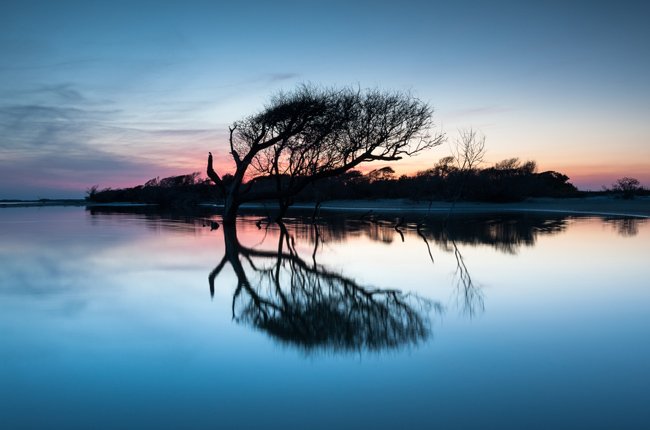 Contributor>Kevin Travis also shares his experience in capturing an exquisite photo: “On June 30th, 2013, I woke about 05:00 and headed to the west end of Folly Beach. Storms were present and I had second thoughts about going, but storms always add an element of drama to any photo. So, I made the hike from the park to the west end of the beach. The storm clouds came and went, and I was plenty soaked, but in the end I was rewarded with this photo and an awesome rainbow. I call it God’s promise.” 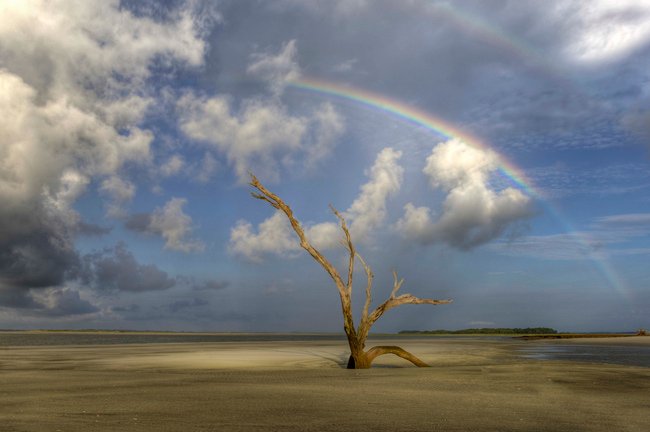 Kevin Travis of Sumter, 2013 © Do Not Use Without Written Consent

Photographer Ben Sumrell tells us about his stunning image: “A beautiful calm morning and sunrise on Folly Beach, South Carolina.” 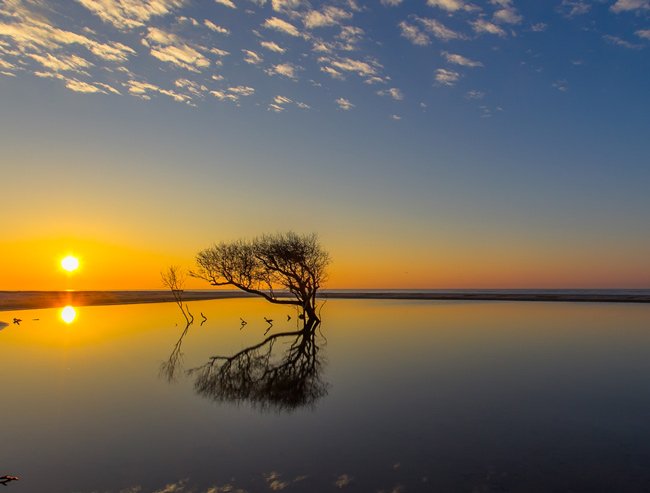 Ben Sumrell of Awendaw, 2014 © Do Not Use Without Written Consent

Harry B. Brown says of his spectacular photo above: “We had just endured terrific thunderstorms that day. I was with a group and we walked down to the Folly Beach County Park late that afternoon. The dark clouds were moving out when I noticed the sun barely peeking through the clouds and then I saw the reflection. I quickly moved my tripod into position and captured this dramatic image.”