The French Huguenot Church in Charleston traces its beginnings in the Holy City to 1680, when 45 French Protestants – or Huguenots – were sent to the new colony by King Charles II to establish themselves as artisans and tradesmen. When the Edict of Nantes was revoked in 1685, many more Huguenots arrived to the land of religious freedom to practice their Calvinistic faith. 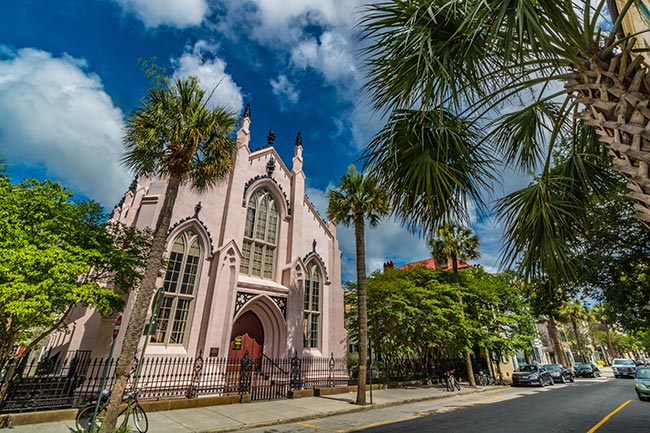 In 1687 the first church on this site was built, and the Reverend Elias Prioleu became its first regular minister. The time of the weekly service was dependent on the tide in order to accommodate worshipers traveling to church by way of the rivers from the neighboring rice and indigo plantations. 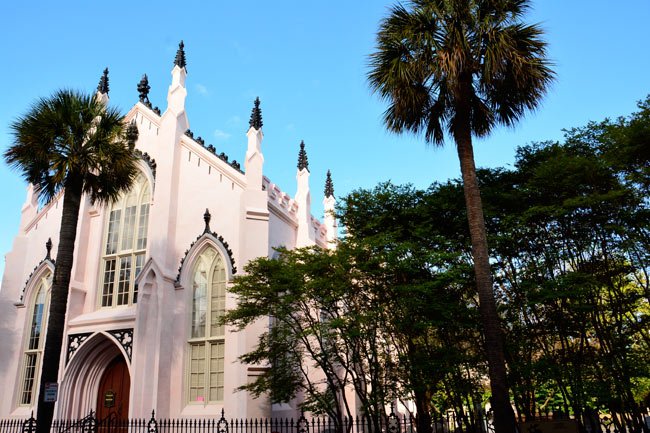 Blake Lewis of Greenwood, 2013 © Do Not Use Without Written Consent

Services were originally conducted in French, but in 1828 English replaced French, in part as a means to increase membership. Despite this, membership continued to decrease over the years, and regular services ceased for much of the twentieth century. Prior to 1983, the church was primarily used for weddings, occasional church services, and Huguenot Society Meetings. Today weekly Sunday services are held in English, with an annual French service. 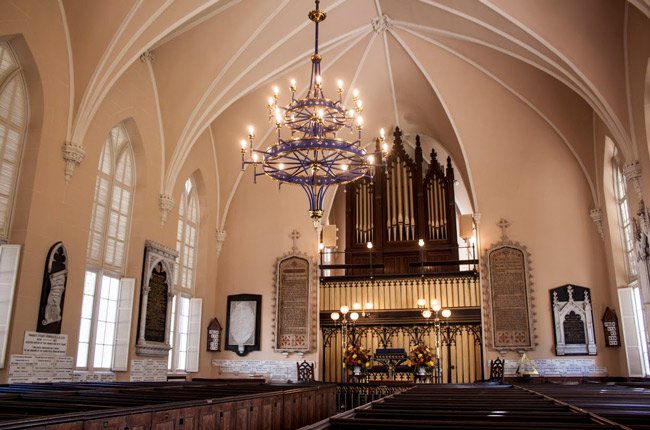 This Gothic Revival-style building was designed by noted architect Edward Brickell White and was the first building of this style constructed in Charleston. Constructed in 1845, it was the third church on this site and was built of brick covered with a rose-tinted stucco surface. The first church building was destroyed in an explosion in 1796 when it was purposely destroyed in order to prevent a fire on Church Street from spreading. 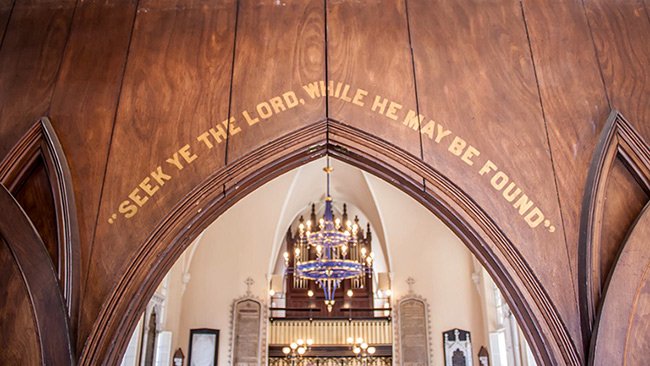 The congregation rebuilt in 1800, though that structure was torn down and replaced with the current building. The church survived the 1886 earthquake but was was restored after suffering damage in the event. 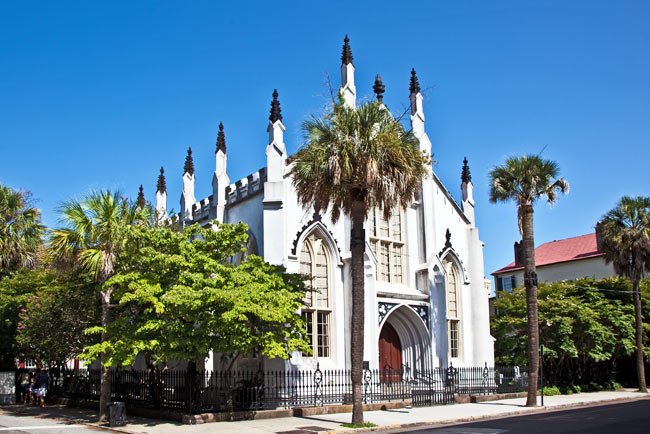 Jorg Hackemann of Schwalbach, Germany © Do Not Use Without Written Consent

In 2008 renovation work conducted at the Dock Street Theatre across the street resulted in incidental structural damage to the church. As a result, the French Huguenot Church underwent a renovation that was completed in 2013. Part of the project included altering the previously-white exterior, seen in the photo above, to its historical pink hue, seen in the top and last photos. The French Huguenot Church in Charleston remains the nation’s only independent Huguenot church. 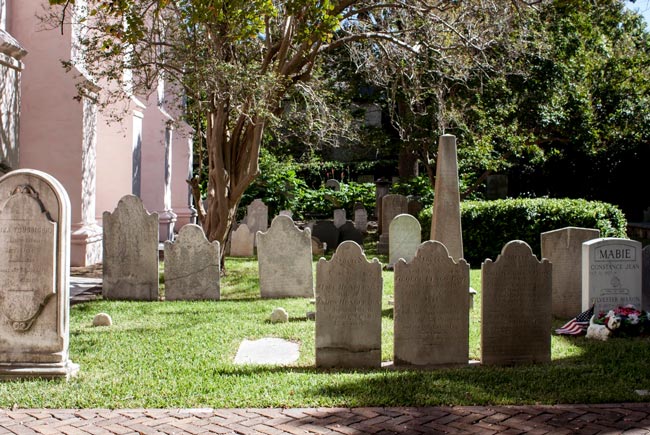 The French Huguenot Church is listed in the National Register:

Completed in 1845, the Huguenot Church was the first Gothic Revival building built in Charleston. It is an excellent example of Edward Brickell White’s versatility for he had recently completed both Greek Doric and Roman Doric buildings within the city. Though White was probably at his best in the design of buildings in the classic manner, the Huguenot Church appears to have been his first essay in Gothic.

The building is stucco on brick with a single tier of Gothic windows and is three by six bays in proportion. It shows a quantity of pinnacle-topped buttresses, a battlement parapet, and dripstones. Cast-iron crockets are located on the pinnacles over the front windows and front gable. The use of pinnacled buttresses on the front elevation as well as the flanks might lead one to expect an interior with nave and aisles; however, the interior is a single cell with plaster ribbed grained vaulting. Its width in relation to its height gives it an unexpected sense of spaciousness for a building of its size. This is the third edifice on this site.

Reflections on the French Huguenot Church

Contributor Susan Klavohn Bryant shares her experience capturing the photo below and her memories of this church: “This photo was taken yesterday afternoon (November 5, 2014). The pink color reflects recent renovations and the restoration of the original color. I have memories of visiting this church with my parents, grandmother, and sister several times when my sister and I were young. We have French Huguenot ancestors on both sides of my family including Daniel Trezevant, who came to Charleston, SC, with his family in 1685.” 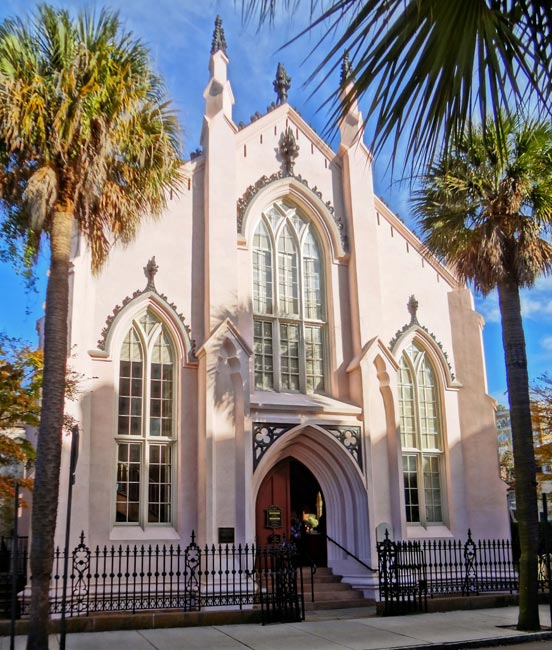 Susan Klavohn Bryant of Mount Pleasant, 2013 © Do Not Use Without Written Consent