The Cooper River bridges were parallel bridges connecting Charleston to Mount Pleasant. The elder of the two spans, the John P. Grace Memorial Bridge, was built in 1929. The Silas N. Pearman Bridge was constructed in 1966. 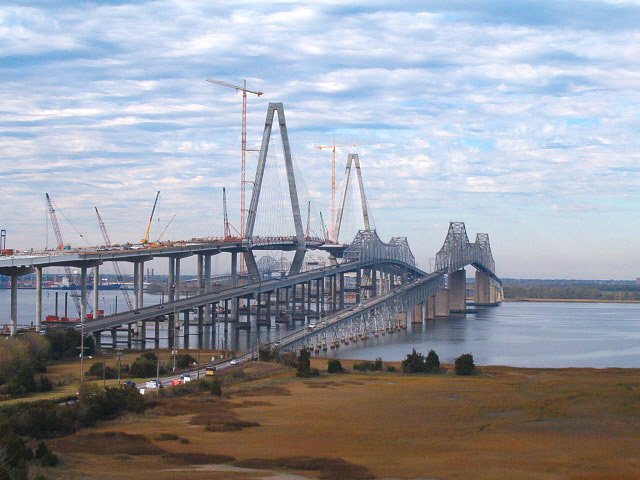 Michael McLaughlin of Johns Island, 2004 © Do Not Use Without Written Consent

The Grace Memorial Bridge was known fondly – and also somewhat fearfully – by locals as the “Old Bridge.” Its two narrow lanes (10 feet each with no curbs or median) opened for traffic on August 8, 1929 as a toll bridge costing 50 cents per trip, with 15 cents extra for each additional passenger. The toll was used to pay for the bridge’s $6 million price tag; it was owned and operated by a private company named Cooper River Bridge, Inc. The president of this company, Charleston native John P. Grace, later served as its namesake. Grace also served as Charleston’s 51st mayor, completing two, nonconsecutive terms from 1911 to 1915 and 1919 to 1923. 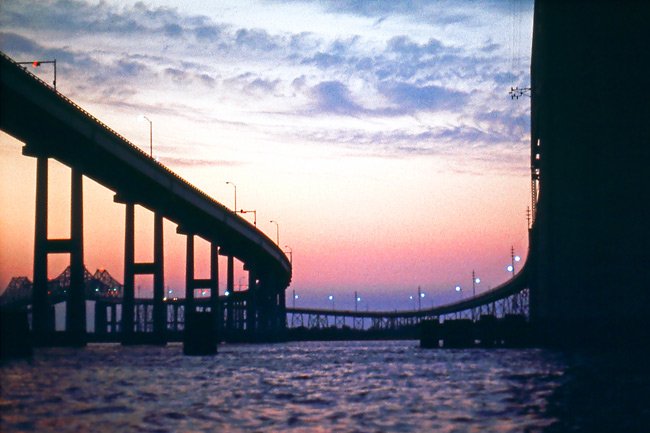 Kenneth Dodds of Charleston, 1975 © Do Not Use Without Written Consent

The bridge took 17 months to build. Prior to 1929, people traveling between Charleston and Mount Pleasant did so by private boat or ferry. Like the Ravenel Bridge today, the Grace Bridge actually crossed two bodies of water – the Cooper River and Town Creek. In all, it measured 2.71 miles and it stood 250 feet tall – 15 feet higher than the Brooklyn Bridge. At the time of its construction, it was the largest bridge of its kind in the world. 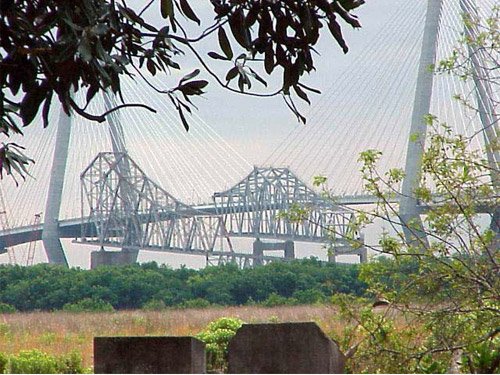 George Penington of West Ashley © Do Not Use Without Written Consent

27 years later, on a stormy afternoon in February 1946, a 10,000-ton freighter named Nicaragua Victory rammed into the bridge after dragging anchor during a winter storm. A 240-foot section of concrete and metal collapsed, causing Elmer Lawson and his family to fall into the water below. Elmer, his wife Evelyn, his mother Rose, and his young children, Robert and Diane, all perished in the cold water.

For two months, the bridge was impassable, and travelers were forced to take an 80-mile detour through Berkeley County. Ferries also resumed service. In April, a Bailey span was erected, closing the gap with a single, temporary lane. Tenders stood on either side of the bridge to direct traffic, but due to a 12,000-ton weight limit, trucks and buses had to continue using the long detour.

The bridge was repaired by June of that year. Because the Nicaragua Victory had been under contract with the United States government, federal taxpayers footed the $300,000 repair bill. The State of South Carolina then took ownership of the bridge, and a ceremony was held to celebrate the end the toll.

As time passed and traffic grew heavier, the need for a second bridge became apparent. In 1966, a three-lane twin of the Grace Memorial Bridge opened, dedicated in honor of then Highway Commissioner, Silas N. Pearman. Most people, of course, knew it simply as the “New Bridge.”

By the 1990s, however, both of these bridges had become unsafe. In fact, the Grace Memorial Bridge had been deemed structurally obsolete by 1979, and the Pearman Bridge struggled to handle the heavy traffic between Charleston and Mount Pleasant. Local politician Arthur Ravenel spearheaded the campaign for a new bridge, and it was subsequently named in his honor.

The Ravenel Bridge opened during a week-long celebration in July 2005. An eight-lane, cable-stayed bridge with two diamond shaped towers, it allows clearance for modern ocean freighters to access the Port of Charleston. Both of the earlier Cooper River Bridges were demolished by dynamite in 2007, their signature silhouettes no longer stretching across the sky.

Reflections on the Cooper River Bridges

Chuck Boyd © Do Not Use Without Written Consent