Situated along the muddy banks of Hampton (also known as Wambaw) Creek, a tributary of the South Santee River, lies Hampton Plantation in the rural stretches of Charleston County, outside of the village of McClellanville. Hampton was once a bustling and prosperous rice producing plantation but is now owned and maintained by the State of South Carolina as a museum. Though the grounds of Hampton encompass just over 300 acres, they are no longer used agriculturally and have been reverted to the original swampy and wooded conditions which give the Lowcountry its name. 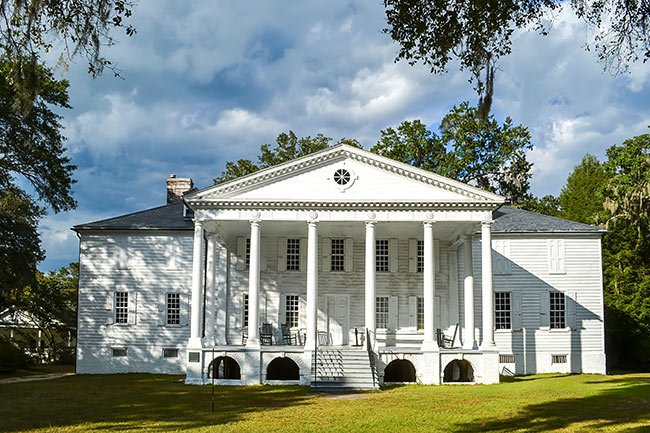 Unusually grand for the area, this stately home was built around 1735 for Huguenot settler, Noe Serre. The original structure was four rooms downstairs with a central hall and two additional rooms upstairs with two interior chimneys. By 1757, the plantation came into the possession of Daniel Horry, by marriage. Horry was responsible for adding a second story to the home as well as wings flanking the original structure. The most notable feature of the wing to the east was the large two-story ballroom. The ballroom has hardwood floorboards that run the entire length of the room unbroken, a full 30 feet. The ceiling of the ballroom is domed and painted sky blue. 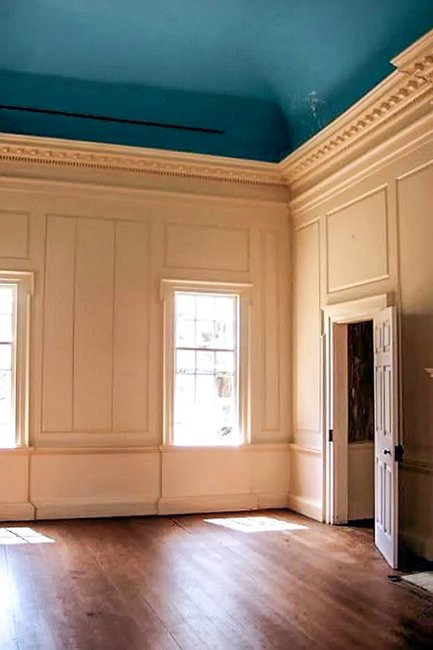 Brandon Coffey of Charleston, 2005 © Do Not Use Without Written Consent

By 1791, the house assumed its current appearance with the addition of a massive front portico. Double-height in scale, this portico is supported by eight columns, six across the front. The pediment above the porch has a circular window with four keystones adorning it. Also of interest are the upper windows of the wings of the home. Because the original configuration of rooms were double-height these windows always appear closed because they are in fact false windows, placed there for the sake of symmetry. 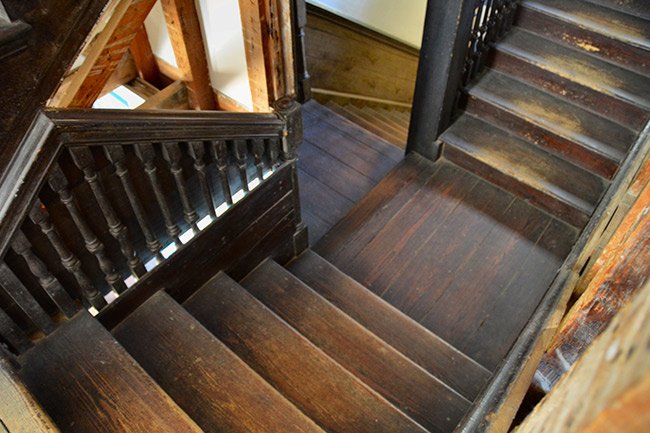 When one tours the home today, portions are intentionally left exposed so each visitor can visualize how the home was constructed. You can look through a portion of the upper rooms to see the plaster and lath walls and the interior of the false windows. 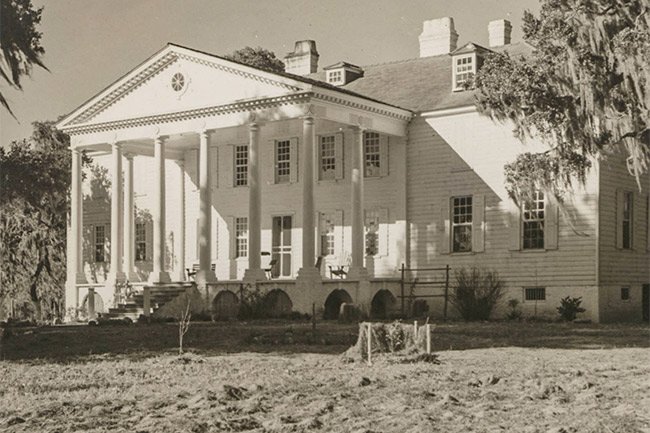 Immediately in front of the mansion lies a large oak with quite a storied history. The portico was freshly constructed in anticipation for our nation’s first president, George Washington’s visit. Washington was on his American tour when he stopped at Hampton, the event caused quite a stir and was considered a great honor to the Horry family. Daniel Horry’s wife, Harriot Pinckney was the daughter of the celebrated Eliza Lucas Pinkcney, who was famous for her ventures in indigo production. Harriot and her mother, Eliza, dressed in blue sashes with portraits of the president, greeted the president excitedly as he arrived. They informed Washington that the oak growing in front of the home would be cut down to have a clearer view, the president disagreed causing the women to second guess their decision. The oak was never cut down and is now named Washington Oak in George Washington’s honor. 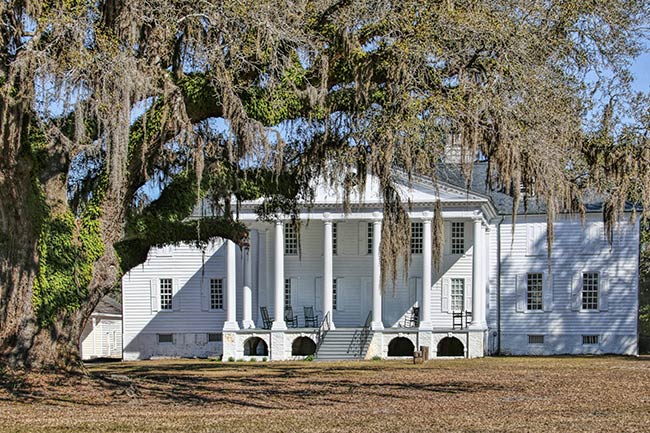 Like all plantations, Hampton was worked with the heavy use of slave labor. Enslaved people from Africa constructed intricate systems of fields, embankments and dikes for the production and farming of rice. Trunks, or gates, were on each rice field which allowed for the fields to be flooded and drained depending on the need. Slave houses would have lined different areas of the property where the enslaved would live and sleep. One of the only remaining structures is this chimney which was part of the home owned by descendants of Prince and Sue Alston. Archeological excavations have been actively occurring on the property which uncovers a little more of the plantation’s past with each dig. 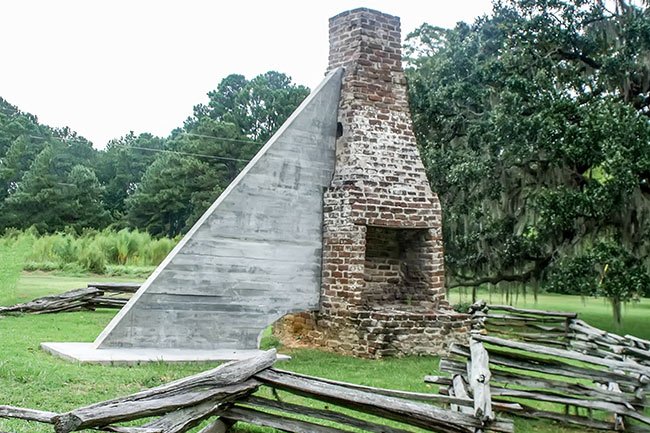 The kitchen house, as seen below, was built sometime in the 1800s. The kitchens in these times were always built away from the house for both the fear of fire and for the oppressive heat the large cooking fireplaces created. This structure is larger than those of other plantations and most likely would have housed sleeping quarters for the enslaved who worked here preparing meals for the big house. 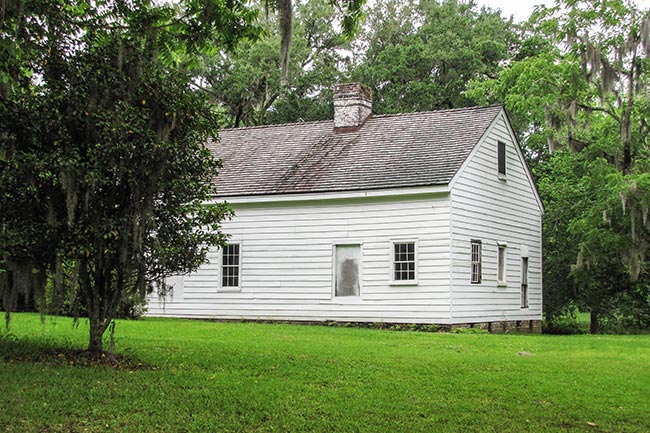 Brian Stansberry of Cookeville, TN, 2010 © Do Not Use Without Written Consent

In addition to those who worked in the kitchen and rice fields, Hampton would have had hundreds of others including house slaves, blacksmiths, carpenters, seamstresses, and masons. The interior of the kitchen is unrestored and not open to the public due to a colony of bats living in the attic of the structure. The Rafinesque’s Big-eared bat are listed as an endangered species and are protected. The colony living at Hampton are thought to be the largest maternal colony in South Carolina. 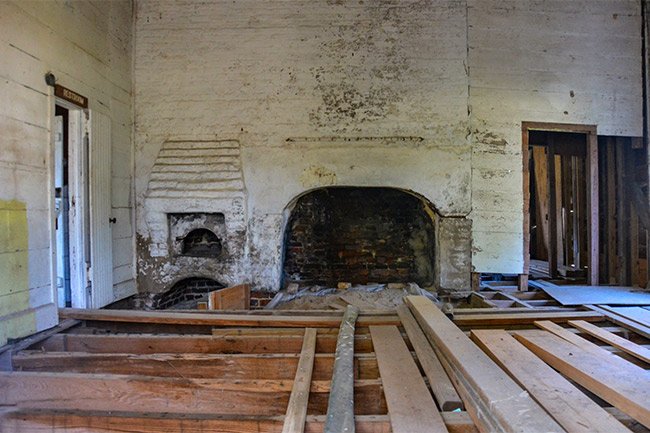 No mention of Hampton Plantation would be complete without knowing the contributions and love of this place from Archibald Rutledge. Hampton is unique in that it never left the hands of the descendants of the original families who owned it. Rutledge grew up in this home and would return to it after decades of being an English professor in Pennsylvania. He chronicled his experiences of restoring the home, hunting the property, planting gardens and getting to know the descendants of the enslaved who he considered family in his famed work, Home by the River, published in 1941. Rutledge was also South Carolina’s first poet laureate who wrote over 50 books, many about life at Hampton. 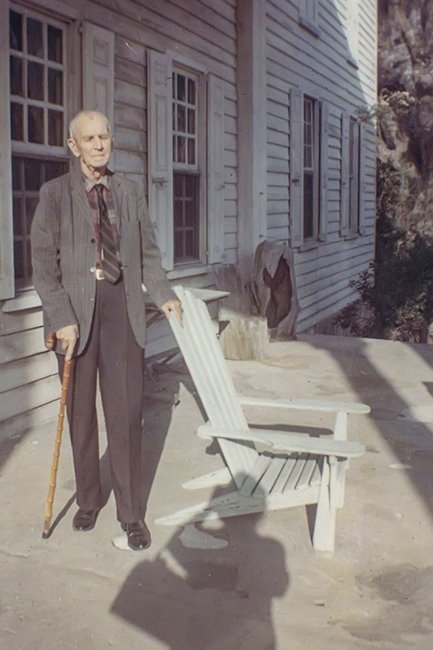 Georgetown Digital Library, 1966 © Do Not Use Without Written Consent

We are fortunate as readers to have these volumes at our disposal because they offer rare and intimate looks into the daily happenings of a plantation. The history, poetry and enjoyment from Rutledge’s many volumes are sheerly priceless and irreplaceable; both culturally and historically. Extensive plantings of camellia japonica and other plants line brick-edged gardens paths that wind around the creek to the old family cemetery. Rutledge was also responsible for the planting of this avenue of holly trees that approached his ancestral home. 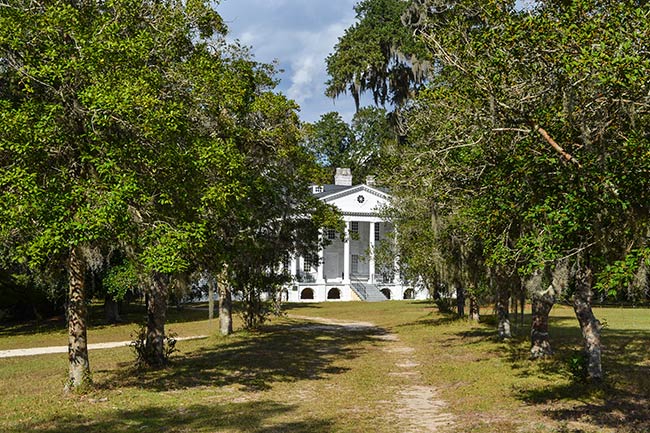 Rutledge wanted to ensure that Hampton would be protected so he deeded his beloved property to the State of South Carolina for use as a historic site in 1970. While alive, he happily offered tours of the mansion to anyone who expressed interest and wanted to be sure that this continued when the state assumed ownership. Rutledge also ensured that descendants of the enslaved had full access to their historic cemetery, known as Sam Hill, where their loved ones could be tended to and burial rights were still accessible. They also continue to have hunting and fishing rights to the property. Two-miles of walking trails are accessible along the former rice fields allowing visitors to see the details of the labor from times past. Hampton is still very much Archibald Rutledge’s Home by the River thanks to his thoughtful planning and preservation. 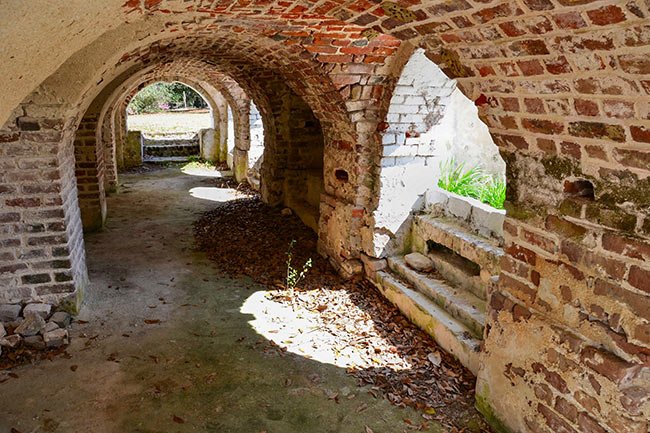 Hampton Plantation is listed on the National Register:

(Hampton Plantation State Park) Hampton, erected in 1735, greatly enlarged after 1757, and with final additions made in 1790-91, is an excellent example of a modest sized frame structure that evolved through organic growth into a large, unified Georgian frame country house. The structure includes one of the earliest examples of the use of the giant portico in American domestic architecture, and Hampton is South Carolina’s finest example of a large two-and-one-half story frame Georgian plantation house. The original house was a four-room center hall structure, with two more rooms on the second floor, built by Noe Serre, a Huguenot settler. The one-and-one-half story frame building on raised brick foundations was 40 feet long and 34 feet deep, and had two interior chimneys.

In 1757, the plantation came into the possession of Daniel Horry through marriage, and shortly thereafter he more than doubled the size of the original house. A second full story was added and extensions made to both ends, bringing the structure to its present size. The present hipped roof, with two dormers in front and rear, was built over the entire house, and each new wing had an interior chimney. In 1790-91, the south façade assumed its present unified appearance, when a six column wide giant portico and pediment were added across the center portion of the original house. Rosettes, panels, and flutings adorn the frieze of the portico, and the pediment contains a circular window with four keystones.

Reflections on the Washington Oak

Katherine writes, “I took advantage of the cooler weather today to paint “en plein air” (on location) at Hampton Plantation State Historical Site. The magnificent Washington Oak framing the plantation house’s stately front portico with moss draped branches is the subject I chose to paint this afternoon. The tree is said to have been saved from being cut down to provide a better view from the newly built front portico by President George Washington during his visit to Hampton Plantation in 1791. Now a mighty live oak, the tree was named in his honor. The lengthening evening shadows falling through the tree’s branches and across the front lawn create an interesting value contrast in my plein air painting of Hampton Plantation, the stately home of South Carolina’s first poet laureate, Archibald Rutledge.”

Katherine Schneider of Mount Pleasant, 2009 © Do Not Use Without Written Consent