This Greek Revival building in downtown Charleston was built for the Hibernian Society, a benevolent organization founded in 1801 to provide aid to Irish immigrants. The organization, which stemmed from two earlier Irish fraternal orders, attracted men of considerable wealth – both Roman Catholic and Protestant. Eventually members wanted a formal building to hold their meetings and other social functions. The group acquired a lot on Meeting Street in the 1830s and began construction on their social hall in 1839. The building was completed in 1841 and has hosted countless social events for the Hibernian Society, as well as other groups, ever since. 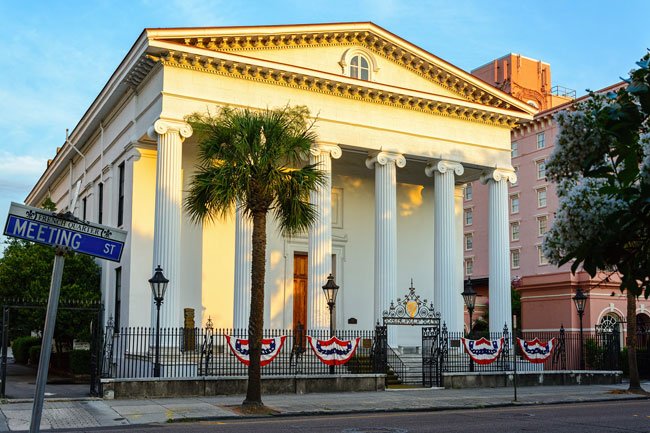 The building boasts interesting architectural details. The wrought iron fence is adorned with a gilded harp, thought to be the work of noted blacksmith Christopher Werner. A similar harp can be seen in relief above the entrance. The portico, which was rebuilt after the earthquake of 1886, holds a stone from the Giant’s Causeway, brought from County Antrim in Northern Ireland in 1851. The building is the site of an annual Saint Patrick’s Day banquet as well as the Saint Cecilia Society debutante ball. Hibernian Hall is also known for hosting the 1860 Democratic Convention.

Hibernian Hall is listed in the National Register:

Hibernian Hall is the only extant and authentic building significantly associated with the Democratic Convention of 1860 at Charleston – one of the most critical political assemblies in the Nation’s history. At Charleston, the fate of the old party system was sealed – the Democratic Party was shattered and Republican victory assured in the fall. Hibernian Hall served as headquarters for the faction supporting Stephen A. Douglas, the pivotal personality of the convention. Completed in 1840, Hibernian Hall was the first semi-public structure of pure Greek type in the city of Charleston. It has a front colonnade of six Ionic columns surmounted by a pediment. The entrance leads into large stair hall, centered by an open rotunda covered by a dome with coffered panels, supported by superimposed columns of the three Greek orders. The pediment collapsed in the earthquake of 1886 and was replaced by one with modillions of the Corinthian order and center circular-arched window.