Businessman J.M. Connelley moved to Charleston from Edgefield in 1892 after purchasing a funeral business from Frederick Ansel. Connelley bought the single house at 313 Meeting Street to use as his residence, and in 1894 he built this Romanesque Revival-style funeral home on the lot next door. 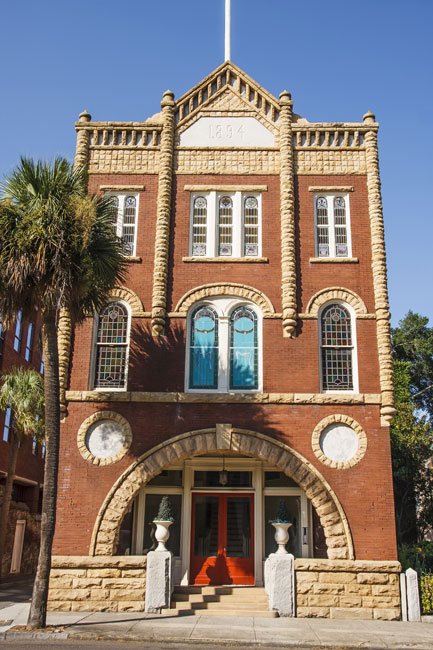 Darryl Brooks of Atlanta, GA © Do Not Use Without Written Consent

Mr. Connelley successfully ran his funeral home for several decades, serving the city’s most prominent families as Charleston’s first licensed mortician. An entrepreneur, Connelley also operated another business, Charleston Greenhouses, from this site. An aquarium situated in front of his greenhouses contained the many tropical fish he sold from the grounds of the funeral home. In 1984 an Atlanta business purchased the building and converted it into condominiums. The sandstone facade and stained glass windows that are the defining details of this Victorian-era brick structure are original, and the glass still adorns several of the building’s units. A brick coffin house that Connelley built behind the funeral home is now owned and used by the College of Charleston.