This pre-Revolutionary house in downtown Charleston has survived two wars. The lower Meeting Street home was built around 1760 for attorney James Simmons, originally as a traditional Georgian house with a central hallway flanked by two rooms on either side on each floor. Following Simmons’ death in 1775, the home was acquired by Robert Gibbes, a former Colonial governor. Gibbes and his family fled the property during the British occupation of the city in the Revolutionary War only to return after the war and find their home in shambles. As you can see below, its grandeur would be later restored. 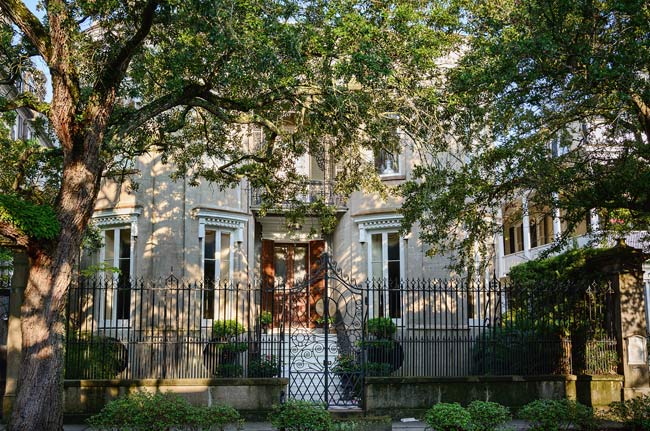 In 1809 planter William Brisbane bought the home and owned it until the 1840s. Otis Mills, prominent builder and businessman as well as proprietor of the Mills House Hotel, purchased the property sometime between 1846 and 1848 and is thought to be responsible for adding the home’s signature double bays and cast-iron balcony.

Once again, the home came under occupation during wartime, this time in the Civil War. The estate was used as the headquarters of General Pierre G.T. Beauregard, commander of the Confederate forces in Charleston. General Beauregard remained here until August, 1863, when he relocated his headquarters to the north of the city. United States Congressman Michael P. O’Connor, who served in congress from 1879 through 1881, purchased the property in 1876. Prior to his congressional term, O’Connor sat in the South Carolina House of Representatives from 1858 until 1866. During his tenure in the statehouse prior to the Civil War, he argued against secession.

In June of 2016 the James Simmons House sold for $7.51 million, the second-highest sale price of a residential property on the Charleston peninsula.