Update: Martha Lou’s Kitchen served its last meal on September 1, 2020. Ms. Gadsden was 90 years old. The property she rented for nearly four decades was sold to developers by its new owner, Craig Bennett, Jr. His father, Craig Bennett, Sr., had been Ms. Gadsden’s landlord for 37 years. He passed away earlier in the year. Ms. Gadsden said at the time, “I’m too old to get started again.”

Martha Lou’s Kitchen in the outskirts of Charleston is the perfect place to grab a plate of Lowcountry soul food. Owner Martha Lou Gadsden opened her business in 1981, and since then it has been featured on the Food Network and in the New York Times. But none of the attention has gone to Gadsden’s head. Prices remain reasonable – especially for a “foodie” town – ensuring that locals and visitors keep the parking lot full. 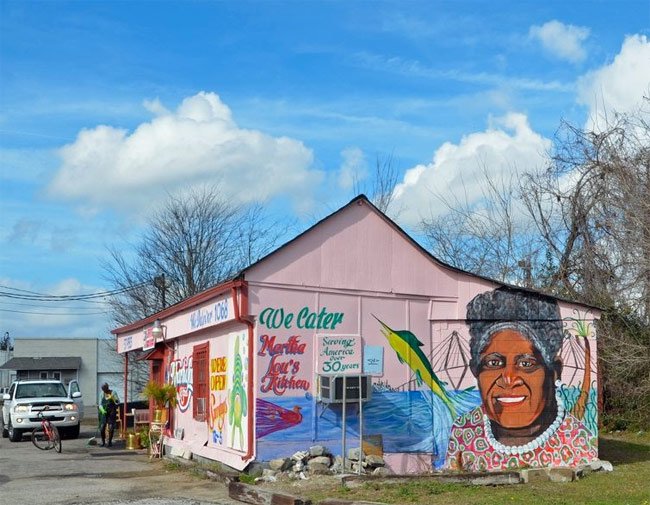 Pam Morris of Mount Pleasant, 2013 © Do Not Use Without Written Consent

Gadsden grew up busing tables at a Spring Street restaurant where her mother was a cook. Now she has her own lunch spot, and it is no longer one of Charleston’s best-kept secrets. The colorful building featuring a mural by the late South Carolina artist Charles DeSaussure draws people in as quickly as the smell of fried chicken seeping from the pink walls. The word about her restaurant is out.

Contributor Pam Morris, who created the website www.us17coastalhighway.com, shares her Martha Lou’s Kitchen experience: “In a southern city known for its wonderful restaurants and award-winning chefs, Martha Lou’s Kitchen – just a short detour off a stretch of Highway 17 called the Septima Clark Parkway – stands with the very best. The menus features to-die-for fried chicken and macaroni and cheese, collards and sweet tea – southern delicacies at their best. Martha Lou Gadsden is the chef and proprietor and a Charleston treasure. The mural painted on the exterior of the building is by South Carolina Artist Charles DeSaussure.”