Considered one of the finest extant examples of Georgian architecture in the United States, the Miles Brewton House in historic Charleston was built between 1765 and 1769 for the home’s namesake, a wealthy slave merchant. Interesting features include woodwork gracing both the interior and exterior of the home by noted carver Ezra Waite of London and the presence of chevaux de frise, or iron spikes placed atop the entrance gate and iron fence. 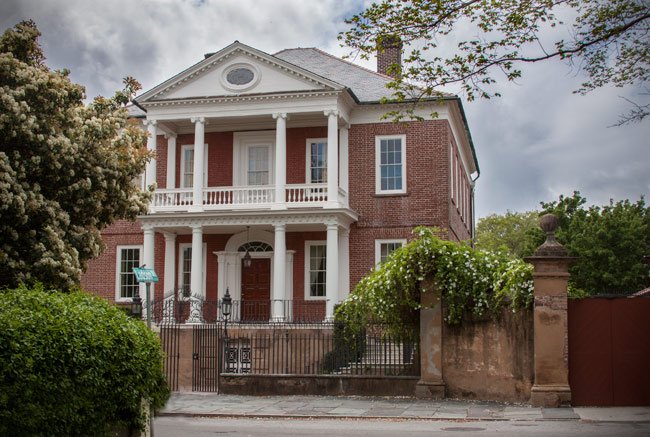 The iron spikes, seen below, became commonplace throughout Charleston following the discovery of the Denmark Vesey slave insurrection plot of 1822. Homeowners felt a sense of security knowing this iron version of barbed wire surrounded their property. Most chevaux de frise was melted and used for artillery during the Civil War; the spiked ironwork here is a rare remaining example. 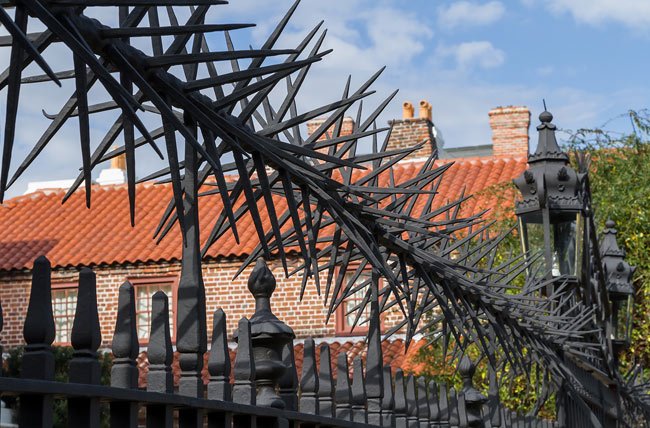 Brewton and his family were lost at sea in 1775, and this home fell into the ownership of his sister, Rebecca Brewton Motte, also the owner of the Calhoun County plantation now known as Fort Motte. During the Revolutionary War, Sir Henry Clinton, Lord Rawdon, and Lord Cornwallis made this home their headquarters. 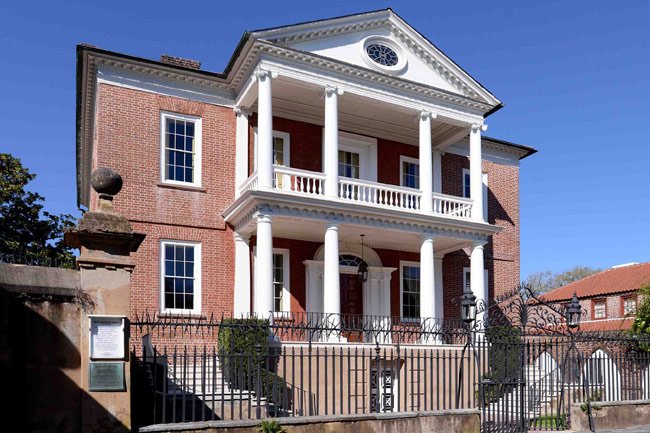 According to legend, Motte kept her three daughters in the attic during the British occupation of the home. An accompanying story claims that a British officer etched a depiction of Lord Cornwallis in a marble mantel as well as the image of a ship. It is also said that a bust of Napolean was given to Motte’s son-in-law, Captain William Alston, by Aaron Burr once he became the owner of the manse; the bust purportedly still sits on the drawing room mantel. Captain Alston bought the home from Motte upon marrying her daughter. The home remains in the ownership of direct descendants of the Brewton family.

The Miles Brewton House is listed in the National Register:

The Miles Brewton House (ca. 1765-1769) is one of the most distinguished town houses of the American colonial period, and the most outstanding of Charleston’s “double houses.” It is one of the few Palladian buildings undertaken in the South by direct influence of the Italian himself. The classical detailing is exquisitely correct, and raises the exterior form to a level of accomplishment very seldom reached by any American Palladian building. Particularly in the two-story portico with its superposed Doric and Ionic orders carved from Portland stone, its finely proportioned pediment with oval window, and its beautifully incised frieze and architrave, do we realize the splendor that this house offers.

The interiors of the house are of the finest quality, and together with its Palladian authenticity, make it one of America’s most distinguished late-Georgian feats of architecture. Just north of the house stands a crenellated gate house, and then in order running east to west are an attached porticoed kitchen/slave quarters building, a connecting arcade, a two-story pavilion, another arcade, and finally a small square outbuilding that may have served any of a number of domestic functions. Directly behind the house, the formal garden of the eighteenth century retains its layout, and against the back wall, about 500 feet west of King St., stand four stone columns which are said to have been part of the original boat landing when the property extended through to Legare Street.