The Morris Island Lighthouse, located just off the northern coast of Folly Beach, proudly guards the Charleston Harbor. When it was built in 1876, the lighthouse stood almost a mile inland – it now stands amidst the Atlantic Ocean, listing slightly to one side, as seen below.

Many people love the lighthouse and have worked hard over the years to protect it. Save the Light, a local grassroots organization, raised money to buy the lighthouse from its former owner in 1999. The Morris Island Lighthouse is now owned by the state of South Carolina, but Save the Light continues to lead the way in its restoration and preservation.

Restoration efforts thus far have been threefold. First, the US Army Corps of Engineers built a steel cofferdam (enclosure) around the lighthouse’s base. Second, large stones were placed in a circle surrounding the cofferdam to prevent further erosion. Finally, in 2010, new pilings were installed to stabilize the foundation. The images above and below detail these efforts.

Morris Island itself is accessible only by boat, but the lighthouse is visible from many of Charleston’s coastal communities. Today a tiny and fragile island, Morris Island was once home to at least 15 buildings, including three Italianate cottages, a small schoolhouse, and numerous barns and other outbuildings. The small village was connected to the back of the island by a long, wooden walkway. Many lighthouse keepers and their families lived there over the years.

The first lighthouse on the island stood just 42 feet tall and was erected in 1762. Its 1838 replacement stood 60 feet taller and featured a revolving light. During the Civil War, the Confederate army destroyed the structure to prevent Union troops from using it as a lookout tower. The US government replaced it immediately after the war. This new Morris Island Lighthouse operated continually from 1876 until 1962, when it was decommissioned and replaced by a modern lighthouse on Sullivan’s Island.

On October 1, 2016 the Morris Island Lighthouse shone once again. The lighthouse was lit as part of a fundraising event celebrating the guidepost’s 140-year anniversary. The private preservation group Save the Light collaborated with South Carolina Electric and Gas to create a beacon duplicating the pattern of light that at one time flashed regularly from the structure’s cupola.

With modern technology, including LED lights, modems, a cellphone tower, and solar-powered batteries, engineers were able to shine the light for a spectacular show, illuminating the sands of Folly Beach to the delight of onlookers on both the beach and in boats. The light was directed toward the beach so as not to interfere with navigation.

If you would like to learn more about the lighthouse and its history, please visit Save the Light. You can also become a member, make a donation, and buy merchandise.

Paintings of the Morris Island Lighthouse 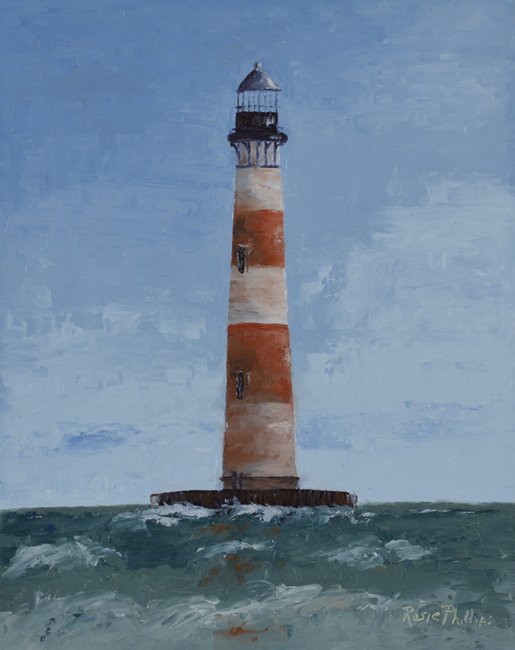 Rosie Phillips of Yonges Island, 2014 © Do Not Use Without Written Consent

Artist Rosie Phillips, who sent her depiction of the lighthouse above, says: “I have always been drawn to lighthouses, especially those with a history. Morris Island Lighthouse has definitely been challenged by man and the forces of nature! Today it is being ‘saved’ by a foundation that has done wonders to the structure in hopes that it will remain a part of the South Carolina coast and Charleston history. As an artist, I have painted several lighthouses I have come across in my travels, but I am lucky to have this treasure close to home and have painted it several times.” 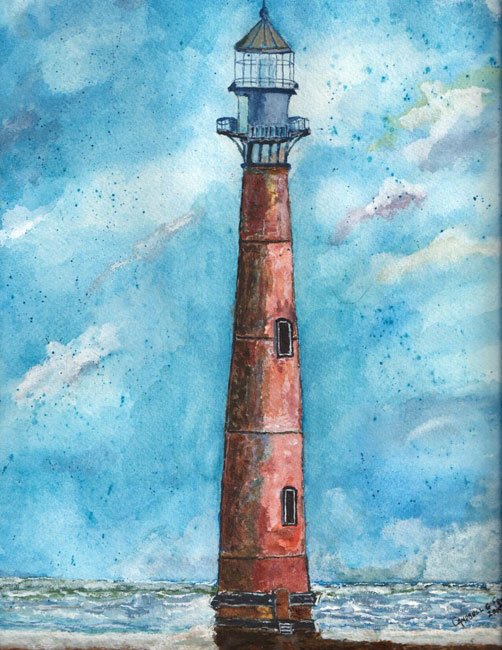 Campbell C. Freeman of Columbia, 2016 © Do Not Use Without Written Consent 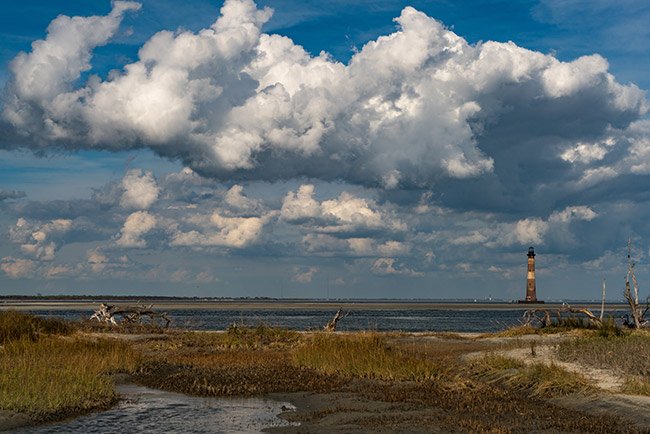 Mark Norton of Charlotte, NC © Do Not Use Without Written Consent 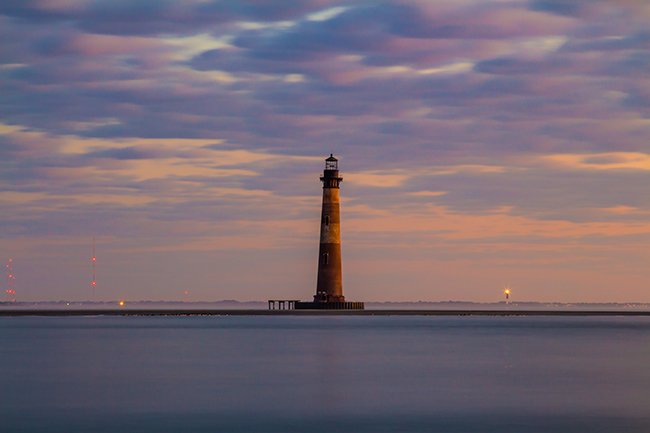 Robert Loe of Charleston © Do Not Use Without Written Consent 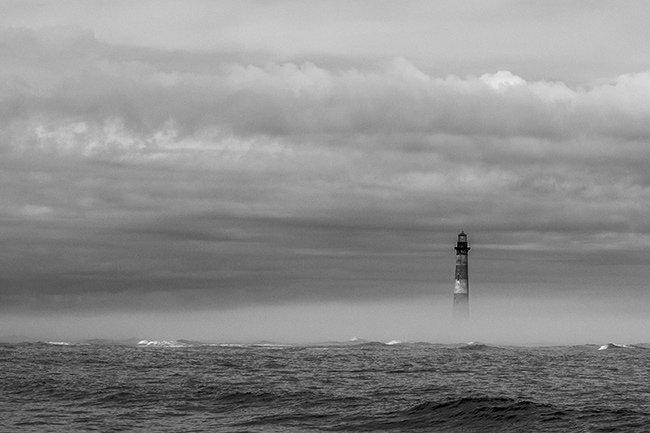 Lawrence Burgess of Charleston © Do Not Use Without Written Consent 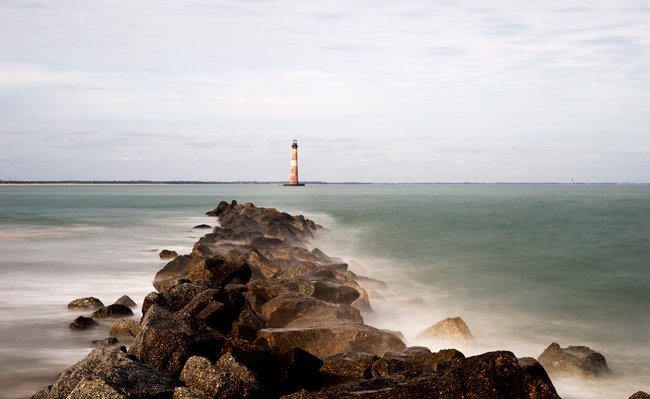 James P. Karner of Rock Hill, 2012 © Do Not Use Without Written Consent 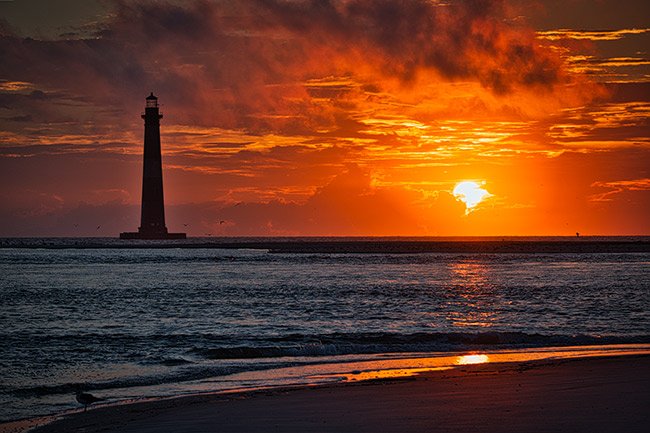 Lou Vega of Fort Monmouth, NJ, 2018 © Do Not Use Without Written Consent 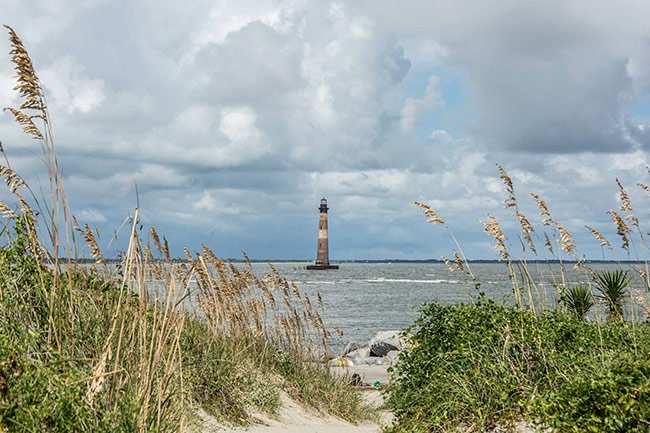 Chad Hartwell of Charleston, 2018 © Do Not Use Without Written Consent 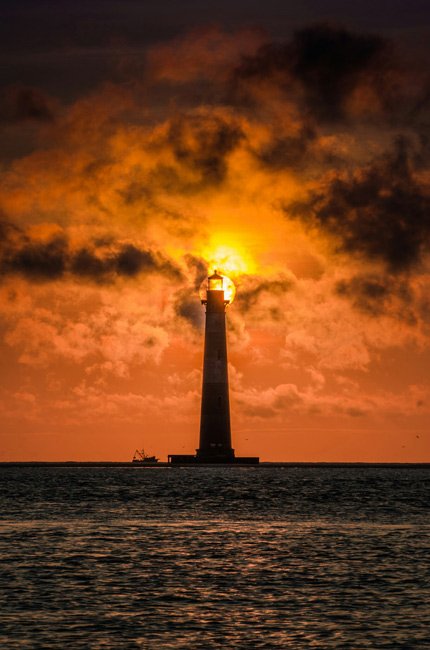 John Jensen of Charleston, 2016 © Do Not Use Without Written Consent

Reflections on the Morris Island Lighthouse

Mark VanDyke says of his photo below, “My initial instinct with the Morris Island Lighthouse was similar to others who visit with camera in hand, would imagine: bring out the longer glass to pull the subject in – lend as much power in the composition as is possible for a tall and slender structure and create the imposing feeling that a beacon at sea should have. But that’s not really the story at Folly Beach and the Morris Island Lighthouse as I saw it and experienced it. The Morris Island Lighthouse is small in comparison to its surroundings. The Atlantic Ocean and the Charleston Harbor surround and dominate the lighthouse’s immediate base. The beaches nearby are strewn with jetties, pilings, rocks and other man-made hard-erosion structures. The Morris Island Lighthouse is just plain small in comparison to its surroundings. The structure itself begs the story of, ‘How did this happen?’ And so, I went against my instincts as a photographer, pulled out the wide-angle lens, and got my feet wet working with what was around me! The result – a very small lighthouse in an otherwise very large and expansive environment…my own interpretation of this place.”

Photographer Melissa Van Camp says of her photo of the lighthouse shining on October 1, 2016 (shown near top of page): “I took this photo on the night of the celebration of 140 years. The lighthouse was lit for this one night, and was amazing to witness and imagine what it looked like all those years ago in its glory. Morris Island is a peaceful place I visit often to view the lighthouse, to watch the dolphins, and just visit with friends while enjoying my passion for photography.”

Visitor Laura Beane explains part of the lighthouse’s lure: “I have visited and photographed many lighthouses, but no other light has captivated me more than this one. She stands majestically at the entrance of the Charleston harbor. After visiting this lighthouse I can see and feel why this is such a beloved landmark to South Carolina and those who visit.”