The Old Citadel, located on what is now Marion Square in downtown Charleston, began as a state arsenal. Built in 1829, the arsenal was first guarded by federal troops from Fort Moultrie in 1830. However, South Carolina removed the troops in 1832 due to a disagreement with the federal government over imposed tariffs and replaced them with South Carolina militia. 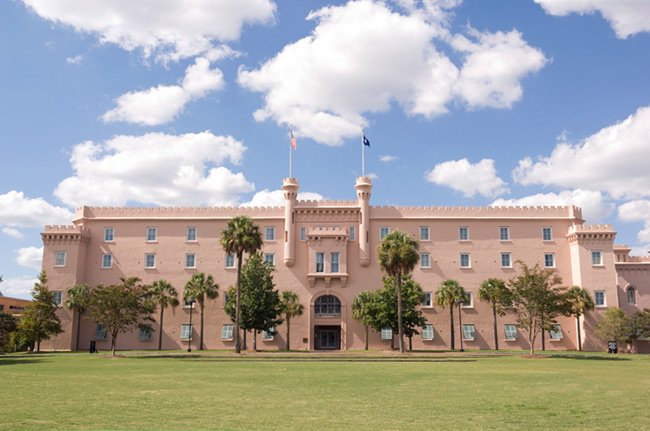 The arsenal continued to be guarded by state militia until Governor John P. Richardson proposed converting the arsenal into a military academy in 1842. The state legislature approved the idea in December of that year, and by March 20, 1843, the school’s first cadets arrived at the Citadel Academy, a date that is celebrated by cadets today as Corps Day. During that first year of operation, the school’s Board of Visitors reported the following vision to the governor and state legislature:

“The Board have aimed at a system of education at once scientific and practical, and which, if their original design is carried out, will eminently qualify the Cadets there taught, for almost any station or condition of life.”

South Carolina seceded from the Union in 1860, and on January 9, 1861, cadets stationed on Morris Island fired what some consider the first shots of the Civil War. Their target was an unarmed Union supply ship called the Star of the West which had recently been acquired by the US War Department. Since the ship was unarmed, others believe the first shots of the Civil War were fired several months later from Fort Johnson on James Island at Union-occupied Fort Sumter. It is hard to place the date precisely as the United States did not recognize the Confederacy as a credible foreign government and thus never officially declared war. 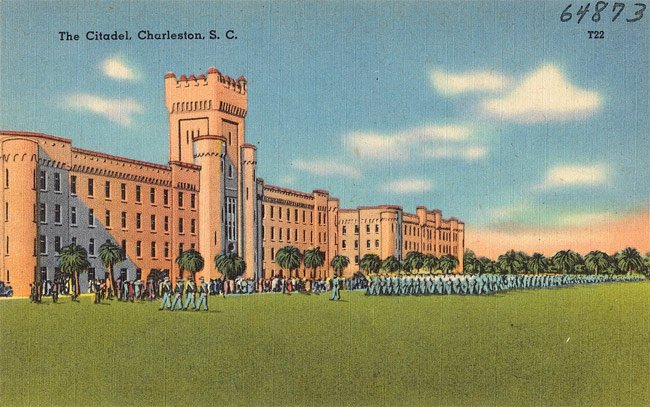 As the war ravaged the South, Union troops took over the Citadel, forcing the school to close on February 18, 1865. It remained in possession of the federal government for the next 17 years. In 1877 Citadel alumnus Brigadier General Johnson Hagood organized a campaign to reopen the Citadel, and in October of 1882, cadets once again occupied the building on Citadel Green, as Marion Square was then known. General Hagood was serving the state as governor by that time, and the school’s current football stadium is named for him.

The Citadel student body grew exponentially over the next several years, and a larger school was planned to accommodate more students. In 1922 the school officially opened its present campus, located along the Ashley River on land donated by the city. Today the Old Citadel is owned by Embassy Suites and operates as a hotel.