Though this building has fulfilled many purposes, the Old Marine Hospital in downtown Charleston is best known for housing the Jenkins Orphanage from 1895 through 1937. After a fire damaged the building in 1937, the orphanage relocated to its current site on the Ashley River. 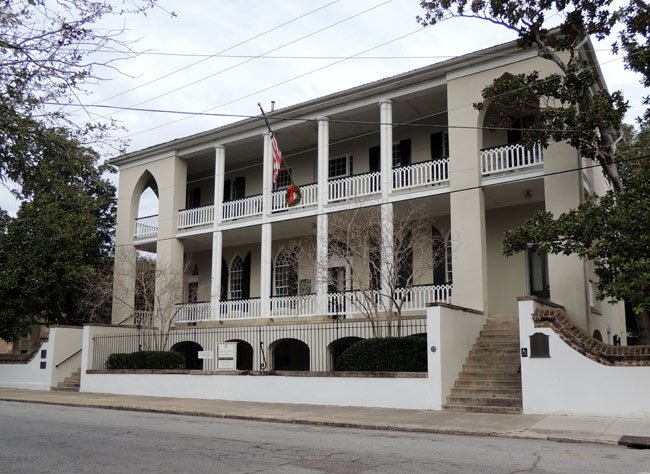 Robert English of Hughestown, PA, 2012 © Do Not Use Without Written Consent

The Old Marine Hospital is the creation of renowned architect Robert Mills – best known for designing the Washington Memorial – and is the city’s oldest Gothic Revival-style building. Completed in 1834, the hospital served sick and disabled merchant seaman of both United States and foreign ships. It also was used as a teaching hospital for the Medical College of South Carolina, now the Medical University of South Carolina. After the Civil War, the hospital was used as a free school for black children and was run by 15 white women until 1870. It then served various purposes in the black community until it became home to the Jenkins Orphanage in 1895. Once the orphanage moved, the building became offices for the Housing Authority of Charleston.

The Old Marine Hospital is listed in the National Register:

Robert Mills, the well-known federal architect, created a structure of charm and delicacy in Charleston’s Marine Hospital. The structure, constructed ca. 1833, is two stories above a raised basement. The roof is hipped and a double-tiered porch is located over an arcaded basement. The façade is seven bays wide. The subtle Gothic style with the token pointed arches, pointed windows, and the clustered columns, then was considered a fitting kind of environment for hospitals, which were associated with medieval monasteries. Even the double-tiered porch railing follows a medieval motif.

The main entrance door has large fanlight and sidelights. The porticoes were an adaptation to climate and acted as weather controls. The building was originally double its present size, with two long wings projecting from the rear. These were removed because of extensive fire damage before the building was restored. Mills erected a number of marine hospitals around the country on much the same plan. They were established to take care of grounded seamen who became public charges.