Update: Sea of Peace House of Prayer, as this property was formerly known, closed in 2012.

This labyrinth, constructed of Charleston cobblestones and local seashells, winds through the grounds of Edisto Island‘s Sea of Peace. The former retreat included a five-bedroom house, walking trails, and access to the Edisto River. It was established in 1994 as a Catholic mission by Dominican sisters Betty Condon and Barbara Hubbard, who invited people of all faiths to explore their spirituality within the refuge. 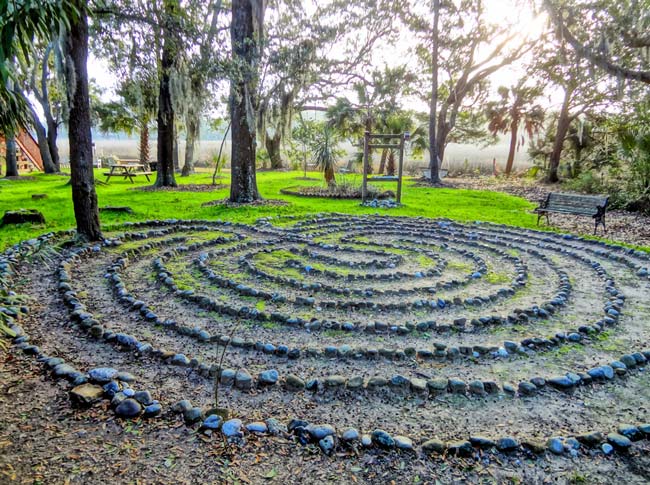 Susan Klavohn Bryant of Mount Pleasant, 2015 © Do Not Use Without Written Consent

The retreat was originally known as the Sea of Peace House of Prayer, but the property was sold to new owners in 2012. The buyers kept the name “Sea of Peace,” and for a time at least, it was available for private rental. The homes proximity to Edisto Beach, Botany Bay, and the ACE Basin provided visitors with the opportunity to reflect and renew their connection with nature.

Reflections on the Sea of Peace

Contributor Susan Klavohn Bryant shares, “This photo was taken at my sister’s coastal retreat on Edisto Island, South Carolina. Now known as Sea of Peace, the property was formerly named Sea of Peace House of Prayer and was a spiritual retreat operated by Dominican nuns. The labyrinth was built with cobblestones from historic Charleston and is still open to the public. The labyrinth is listed on the World-wide Labyrinth Locator and is also mentioned in a book, ‘Spiritual Florida – A guide to retreat centers and religious sites in Florida and nearby’ by Maurico Herreras.”

Plan Your Trip: Sea of Peace