This historic home is affectionately called the “Pineapple Gates House” due to the ornamental finials atop the two brick columns that flank its entrance. It was built in 1800 as a town home for Francis Simmons, a Johns Island planter. The brick single house rises three-and-a-half stories and housed Simmons during his stays in Charleston. His wife, Ruth Lowndes, however, lived separately in another home on Tradd Street, a situation agreed upon by both spouses from their wedding day forward. 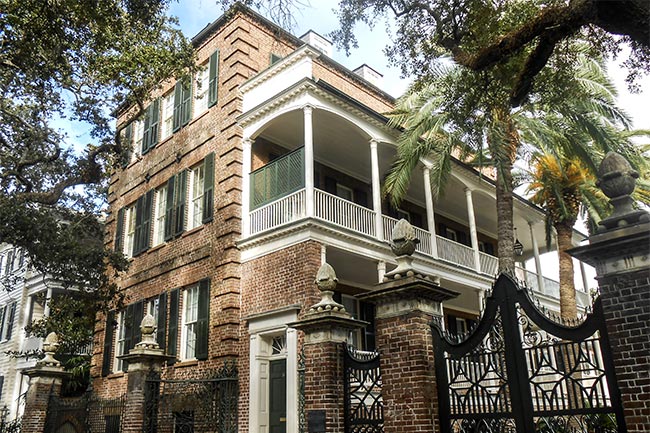 Simmons died in 1814, and George Edwards, also a planter, purchased the home two years later. Edwards added the decorative gates and included his initials in the ironwork. He also added the “pineapples.” Edwards actually commissioned live oak acorns from an Italian stonecarver, but they arrived as pinecones instead. Most people referred to them as pineapples, however, and the nickname “Pineapple Gates House” stuck. The finials are made of sandstone. 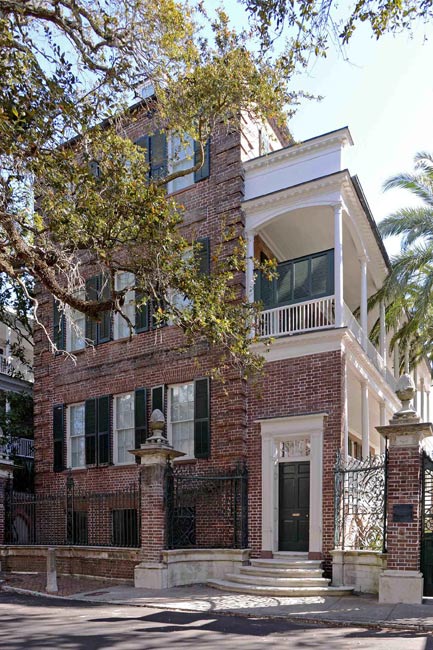 The property is unusually large, especially for downtown Charleston, and in fact takes up both 12 and 14 Legare Street. Three separate gardens adorn these lots, ranging from formal to utilitarian. In Simmons’s time, the rear garden was dedicated to vegetable beds and farm animals. The gardens had been covered by a lawn for much of the twentieth century, but an archaeological restoration in 2015 revealed their original designs. The property also features several intact outbuildings. It is currently owned by Margaret Bradham Thornton, author of the novel Charleston.

The Simmons-Edwards House is a National Historic Landmark, and it is also listed in the National Register:

Built ca. 1800 by Francis Simmons, this three-story house with raised basement is done in the Federal style. The two-story piazza located on the side of the house is typical of many Charleston dwellings during this period. Brick composition is Flemish bond and house has brick quoins at each of its corners. First floor colonnade has stylized unfluted Corinthian columns. Second floor colonnade has segmental arches and the roof over the piazza is denticulated. Basement is arcaded under the piazza. Entrance door has small denticulated cornice over a transom. Roof is hipped with three dormers on each side of the house while one faces the street and rear of the house. In 1816, George Edwards purchased the property and enlarged the premises, creating a garden which was separated from the house yard by a notable fence of wrought iron which had unusual stuccoed columns topped with sandstone balls. The house has extensive outbuildings connected to the main house at its rear.