The Citadel, the Military College of South Carolina – commonly called The Citadel – opened on March 20th, 1843, in the former South Carolina State Arsenal (now the Embassy Suites hotel) on Marion Square in downtown Charleston. The college is historically significant in that Citadel cadets positioned on Morris Island fired the first shots of the Civil War at the Federal supply ship, Star of the West, on January 9th, 1861. 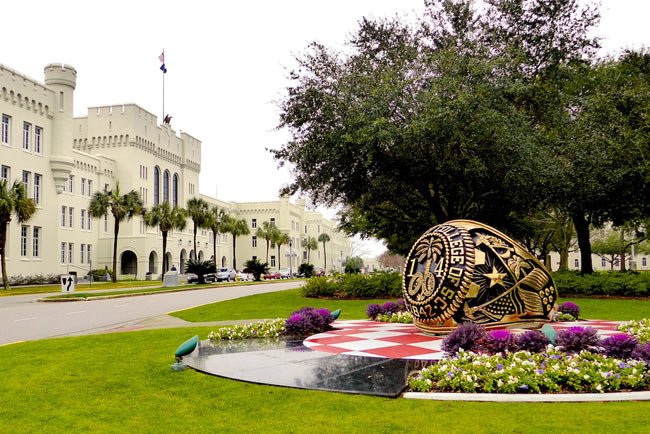 It is also believed that the shot launched at Fort Sumter on April 12th, 1861 – which began the first battle of the Civil War – was fired by a Citadel alumnus. By 1865 Federal troops had occupied The Citadel and did not decamp until 1879. During those years and the two following, the college was not in operation. It finally reopened in 1882 at the request of of Governor Johnson Hagood, Citadel Class of 1847, for whom The Citadel’s football stadium is named. 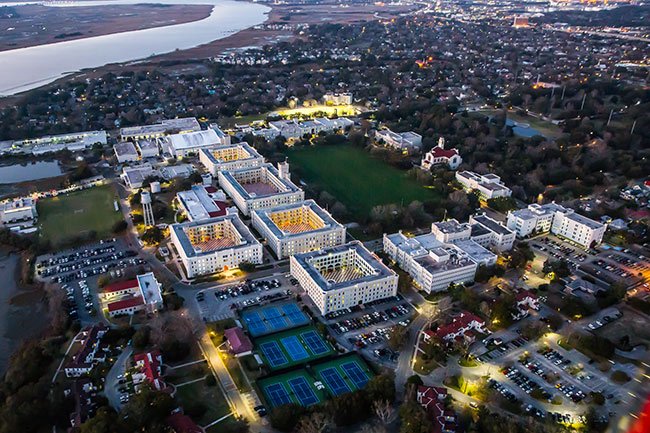 By the early twentieth century, the Corps of Cadets was outgrowing the Marion Square campus. The City of Charleston donated land by the Ashley River to the military school, and the new and present campus opened in 1922. 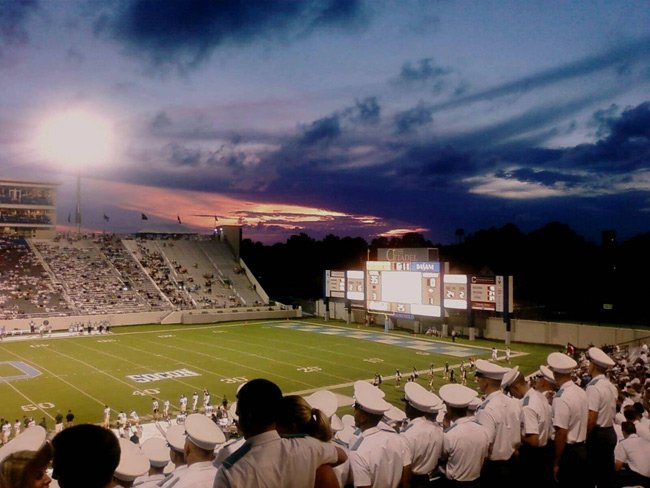 Tom Harris of Charleston, 2008 © Do Not Use Without Written Consent

A popular Charleston tradition is The Citadel Dress Parade. Every Friday afternoon, weather permitting, the entire corps of nearly 2,000 cadets gathers at Summerall Field to step through the paces of this ritual of discipline, ceremony, and celebration. Guests are welcome and there is no admission fee. 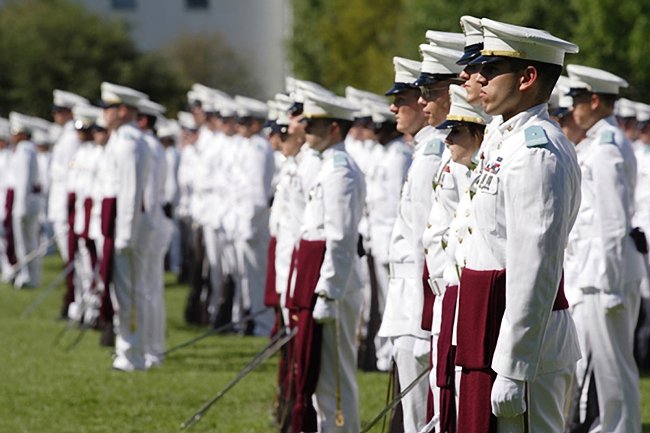 Vera Goegele of Meran, Italy, 2008 © Do Not Use Without Written Consent

The regimental pipe and drum corps leads, dressed in kilts. It plays traditional marches while cadets in dress uniforms carry swords or rifles and march onto the field by company.

Companies form battalions, arms are presented, and cannons are fired. The level of salute varies, depending on what rank of military personnel are present. For example, a 13-round salute signifies the presence of a two-star general. The National Anthem is played and battalions pass in review. At the end of the drill, the entire South Carolina Corps of Cadets passes in review and exchanges salutes with the commanding and senior officers.

From its inception during the Revolutionary War, the pass-in-review was meant to display the glory and strength of the assembled troops. To the commander, it served two functions – dismissing the troops and inspecting their state of discipline and training. It is a fun and exciting show for visitors, but each cadet’s performance is graded at every step, from marching to rifle alignment. 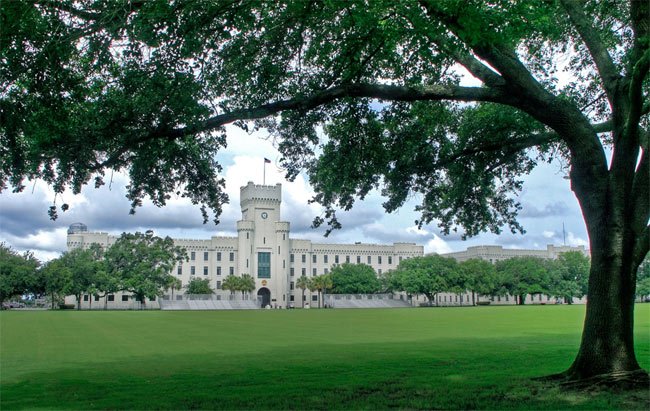 The Padgett-Thomas Barracks houses the Second Battalion and provides an iconic image of The Citadel’s campus. The current building was built in 2004 and is an exact replica of the original building, which was constructed in 1922 yet demolished in 2000 due to structural issues. The new building fits seamlessly onto a campus known for its history and tradition. 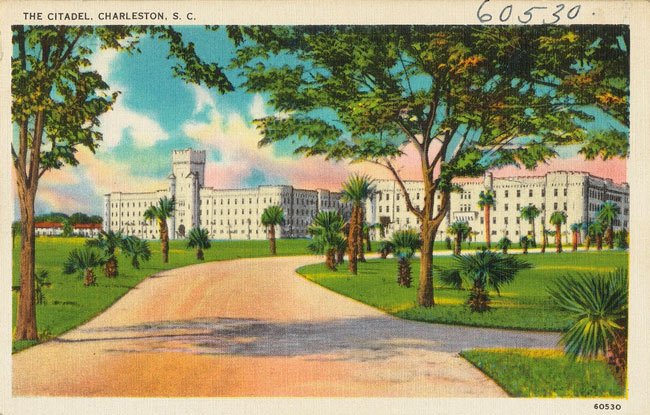 The barracks’ tower stands 109 feet tall and surveys the parade grounds where cadets run their drills. The center of the barracks, as with all Citadel barracks, features a red-and-white checkered quadrangle onto which all rooms open. The building was named for two alumni, Colonel J.G. Padgett, Class of 1892, and Colonel John Pulaski Thomas, Class of 1893, both of whom sat on the Board of Visitors. 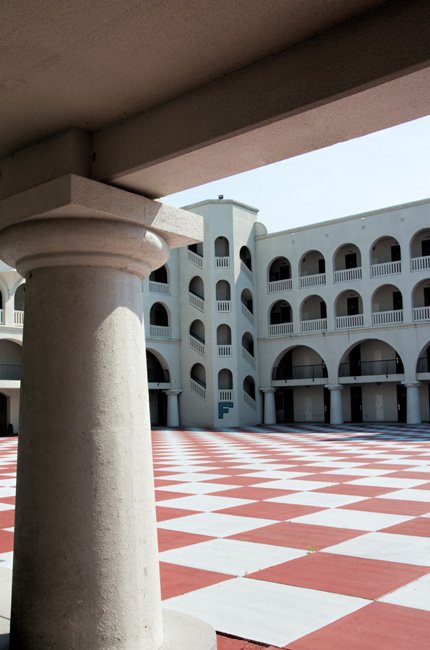 Ed Waldrop of Mount Pleasant, 2016 © Do Not Use Without Written Consent 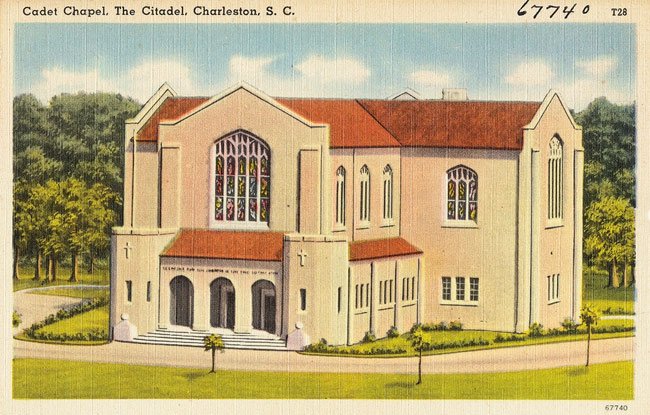 Summerall Chapel, named for General Charles Pelot Summerall, Citadel president from 1931 through 1953, was built in 1936. The first worship service was held in the chapel a year later. 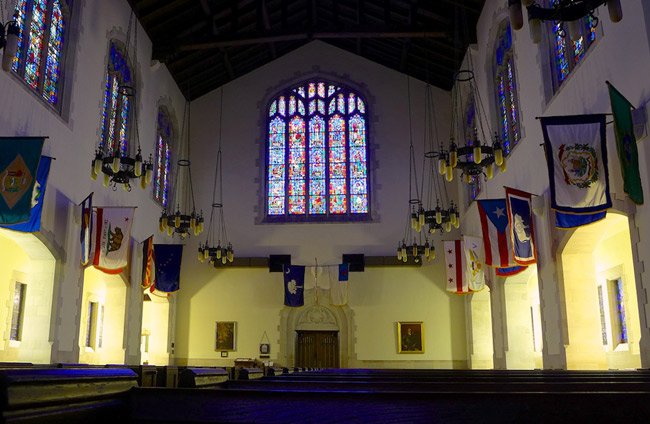 The Gothic-style building features a chancel window dedicated in 1942 to all Citadel graduates who have sacrificed their lives for their country. It also exhibits stained-glass windows representing the classes through 1944. The chapel is nondenominational and hosts weekly Catholic, Episcopal, and Protestant services. 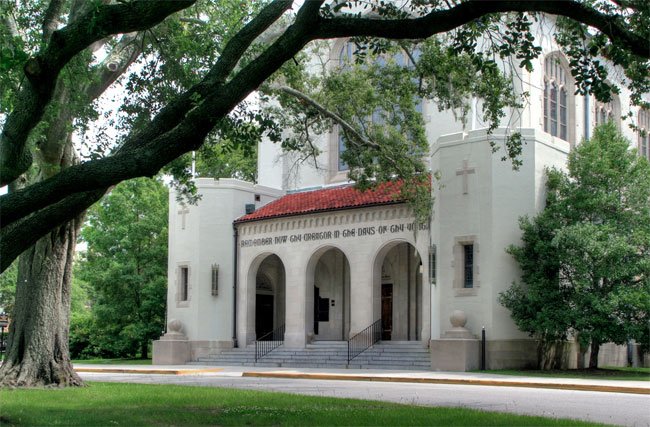 Sword Gates at The Citadel

Aside from the Charleston Police emblem featured on The Citadel’s gates, the wrought-iron sword motif gracing two gates on The Citadel’s campus are identical to those at the well-known Sword Gates House at 32 Legare Street in Charleston. Those swords were designed by ironworker Christopher Werner in 1838. Werner originally wrought the swords for the Charleston Guard House, the former police station that stood at Meeting and Broad Streets. Werner misunderstood his order and created two pairs of swords rather than one, and the surplus went to the Legare Street home. 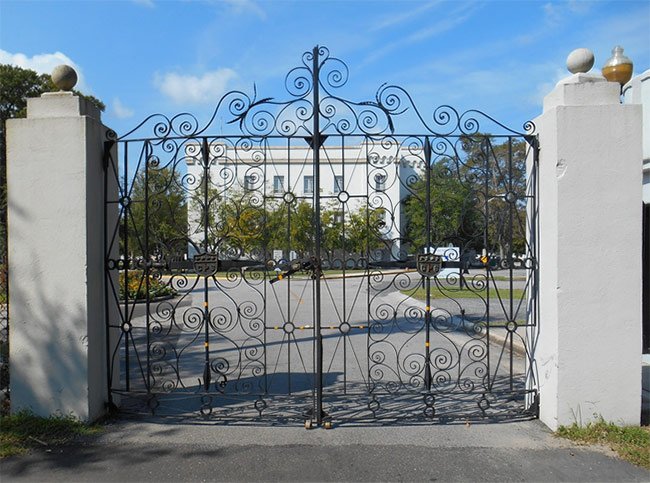 Sarah Fick of Charleston, 2013 © Do Not Use Without Written Consent

After the earthquake of 1886 damaged the Guard House, the ironwork was preserved and eventually installed at The Citadel’s main entrance, Lesesne Gate. The design remained popular for its suggestion of authority and was adopted for the entrance in Hampton Park, Summerall Gate (pictured above and below). The sword gates recently were reproduced again by a graduate of the American College of Building Arts in Charleston and adorn the plaza at Johnson Hagood Stadium. 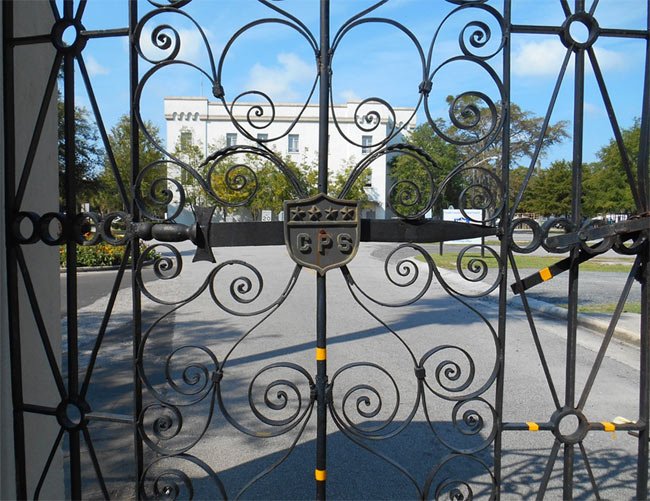 Sarah Fick of Charleston, 2013 © Do Not Use Without Written Consent

Pictured below is The Citadel’s swimming pool prior to the 1976 construction of Deas Hall, where the present pool is located. This photo was captured in the early 1970s by photographer Kenneth Dodds. 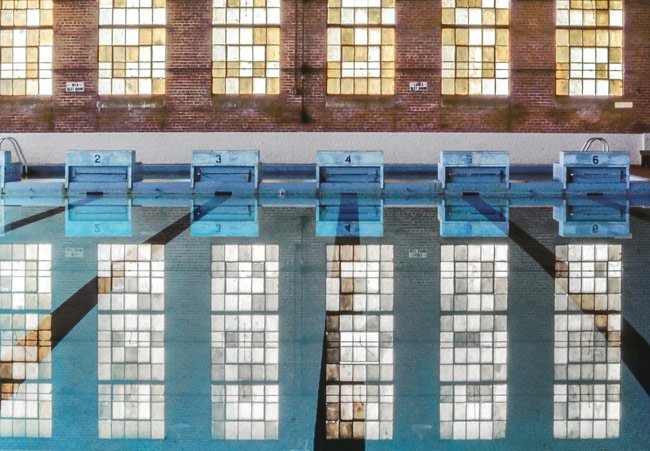 Kenneth Dodds of Charleston, 1976 © Do Not Use Without Written Consent

Dodds says of the old pool, “This pool was in a building that – I think – also housed the basketball court. It was at the northwest corner of the campus, next to the steam plant and across the street from the yacht club. From the look of it, I suspect it dated back to the early forties, at least. The roof was supported by wooden trusses. The pool was 25 meters long, I believe. I can remember going swimming there about 1954 at the age of 6. For many years, Dr. I.S.H. Metcalf (Ted) of the biology department oversaw the water treatment, etc. He later moved over to MUSC and taught anatomy. I would sometimes swim there with him during the lunch hour in the 1970s.”

Reflections on The Citadel

Contributor Ed Waldrop says of his photo of the Padgett-Thomas Barracks: “I have always been fascinated by the history and architecture of The Citadel. This past summer I went on a walkabout through campus. This image was taken inside the Padgett-Thomas Barracks. Though this current barracks has been rebuilt, its architecture is exactly as the original building built in 1922. The original Padgett-Thomas Barracks was the first building built at this current site, after The Citadel was moved from Marion Square. I was mesmerized by the the angles and patterns inside the quad. Some workers were inside doing some renovation. I asked permission to inside and shoot. This is what I got!”

Plan Your Trip: The Citadel