The USS Yorktown, docked at Patriots Point in Mount Pleasant, was the tenth aircraft carrier to serve in the United States Navy. 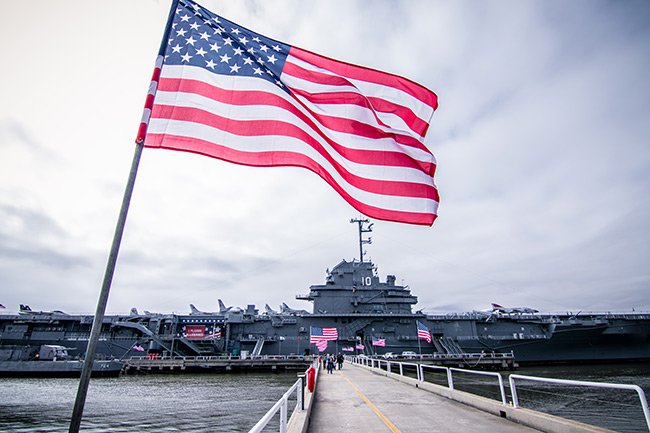 The ship was commissioned on April 15, 1943 and was a key player in the Pacific Offensive that defeated Japan in 1945. The Yorktown received the Presidential Unit Citation and earned 11 battle stars for her service in World War II. 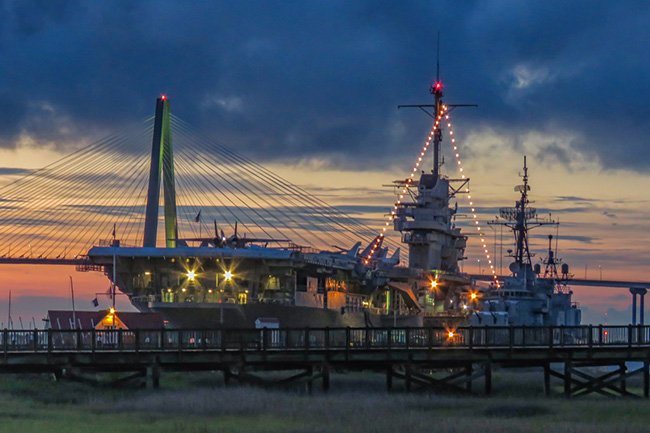 After World War II, the Yorktown was decommissioned and underwent an extensive modernization. Her new angled deck made it easier to operate jet aircraft, and she was recommissioned in the early 1950s as an anti-submarine attack carrier. 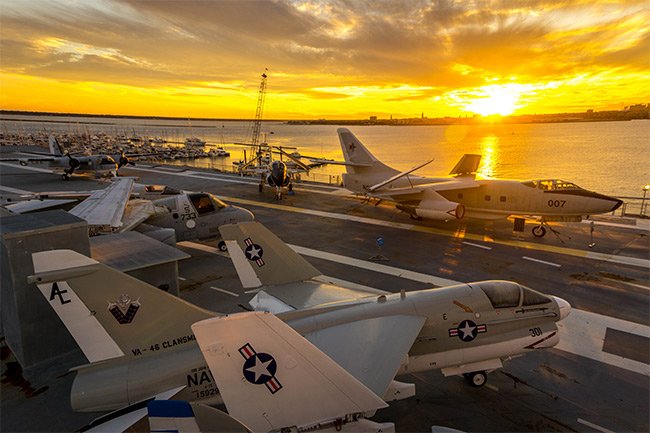 She served again in the Pacific during the Vietnam War, earning five battle stars. One of her final missions was the recovery of the Apollo 8 crew in 1968 after its mission to the moon. The Yorktown was permanently decommissioned in 1970. 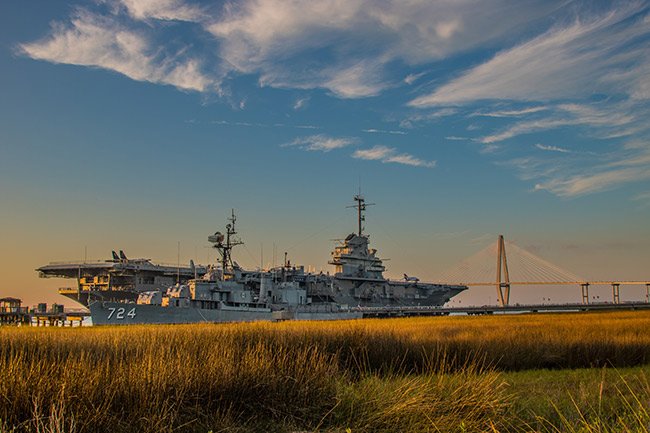 The ship is famous for more than just her wartime missions. The Academy Award-winning movie The Fighting Lady was filmed aboard the Yorktown, as was the movie Tora! Tora! Tora!, which recreated the attack on Pearl Harbor. 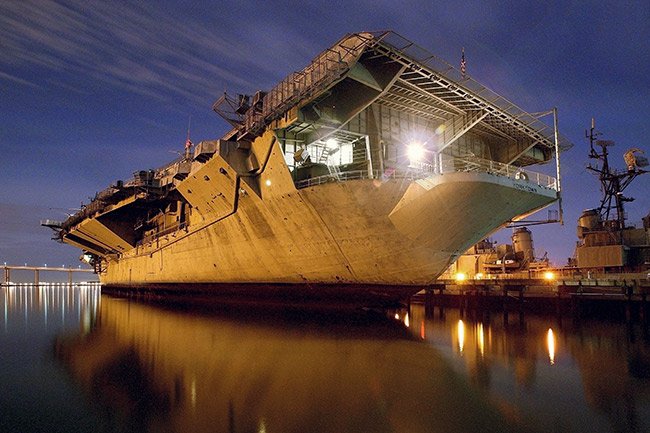 Today, the Yorktown is one of the Charleston area’s most popular attractions. Special events are offered throughout the year, and groups may even reserve a night to camp aboard the carrier for a truly one-of-a-kind experience. 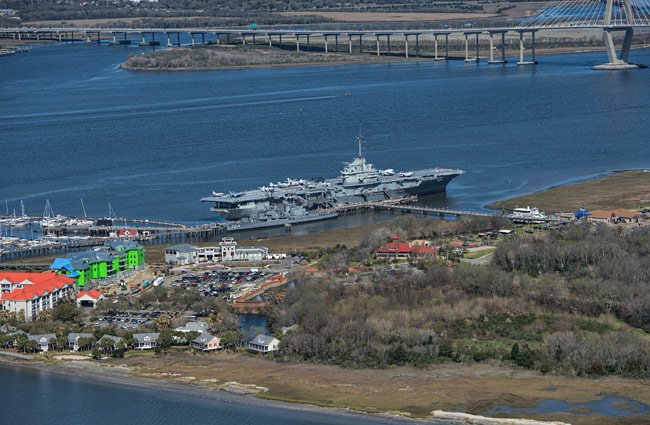 Below she is seen next to the destroyer LAFFEY (DD-724), also known as “The Ship That Would Not Die.” While in service in Okinawa, LAFFEY not only survived attacks from 22 Japanese bombers and kamikaze aircraft on April 16, 1945, but she also shot down 11 of the attacking aircraft. She is the only surviving Sumner-class destroyer in North America. 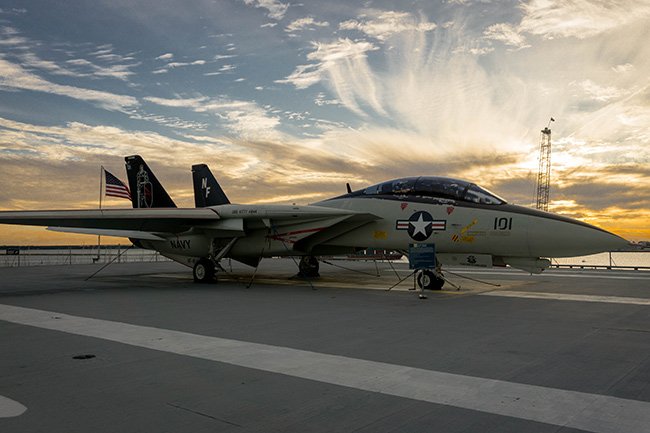 The Yorktown is listed in the National Register:

The USS Yorktown (CV-10), the second of the Essex-class aircraft carriers to be built by the United States Navy, was constructed between 1941 and 1943 to Bureau of Ships specifications by the Newport News Shipbuilding and Dry Dock Company, Newport News, Virginia.

The Yorktown was decommissioned in 1970, and in 1975 was moored in the Charleston Harbor, where it is part of the Patriots Point Naval and Maritime Museum. The ship served with distinction in the Second World War as a primary element in the United States’ military campaign against Japan in the Pacific Theater of Operations. The Yorktown is important, not only as a surviving World War II aircraft carrier, but as one of the most important of these ships.

The ship was named for an earlier aircraft carrier Yorktown (CV-5), which was sunk at the Battle of Midway in 1942. The new Yorktown initiated many technical improvements for the other two dozen Essex carriers, becoming a model for new carrier design. The Yorktown underwent numerous modifications and alterations during its years of military service in World War II, the Korean War, and the Vietnam War, but it is still expressive of the technology, design, and distinguishing characteristics of the World War II-era aircraft carrier.

LAFFEY is also listed in the National Register:

The destroyer USS Laffey (Allen M. Sumner-class destroyer) was built to Bureau of Ships specifications at the Bath Iron Works, Maine, in 1943-1944. The ship served with the United States Navy in the Atlantic and Pacific fleets in World War II and saw later service in the Korean War. The Laffey is the only surviving Sumner-class destroyer. The ship performed convoy escort duty in the Atlantic during May 1944 and afterward assisted with the screening of the Normandy invasion forces and bombardment of Utah beach and the German-held port of Cherbourg. The Laffey moved to the Pacific to join the Fast Carrier Task Force in November 1944. The Laffey supported the amphibious landings at Ormoc Bay and Mindoro and the invasion forces at Lingayen Gulf in the Philippines. During the World War II invasion of Okinawa Island in April 1945, the Laffey was attacked by Japanese kamikazes and suffered five kamikaze hits, three bomb hits and two near misses. The crew, despite heavy casualties and extensive damage, repulsed the attackers and saved the ship. In comparison, the Laffey outperformed any other destroyer or carrier in this most important campaign and for her efforts received a Presidential Unit Citation.

More Pictures of the USS Yorktown

Don Baham of Dublin, California © Do Not Use Without Written Consent 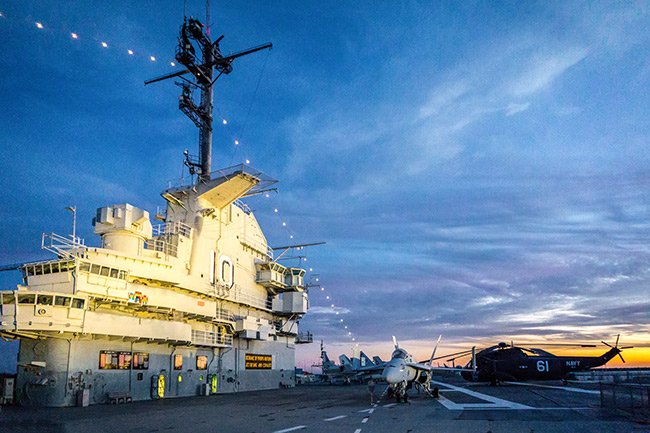 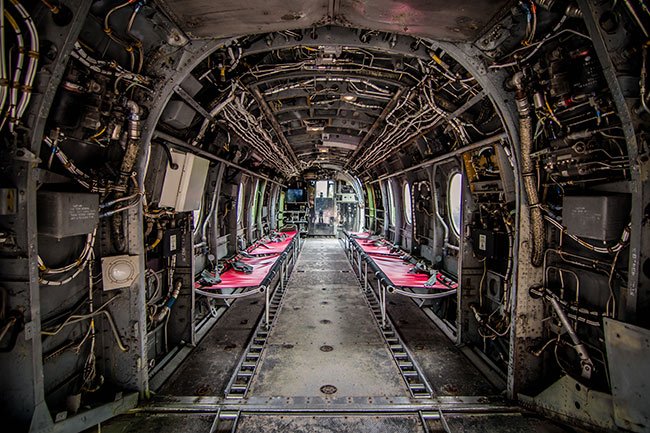 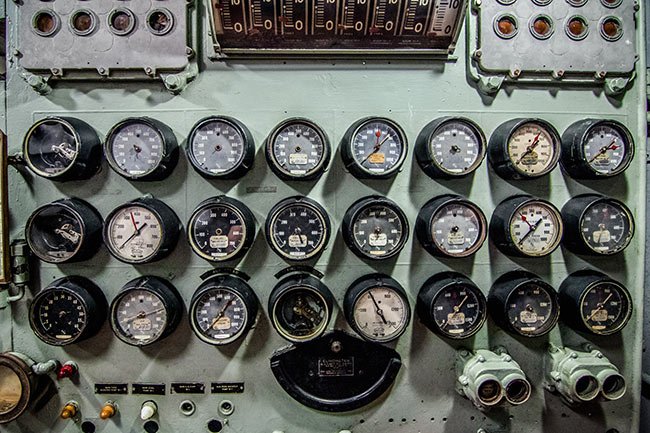 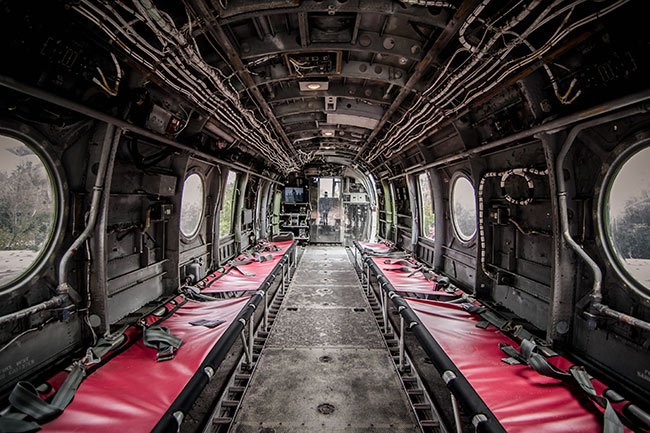