This drawbridge crossing the Wappoo Creek, connecting the West Ashley community of Charleston to James Island, was built in 1956. As part of South Carolina Highway 171, the bridge features a bascule span with a center clearance of 33 feet. It opens to boat traffic on the Intracoastal Waterway every half-hour on weekdays from 9:00 a.m. until 4:00 p.m. and on weekends and holidays from 9:00 a.m. until 7:00 p.m. A boat ramp below the bridge allows small-boat access to the water. 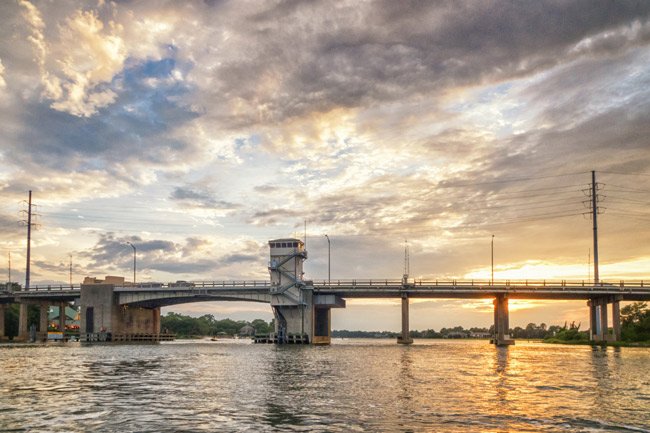 The creek is named in honor of the Wappoo Indians, and the drawbridge is formally known as the Burnet R. Maybank Bridge for Burnet Rhett Maybank, who served as Mayor of Charleston from 1931 through 1938, Governor of South Carolina from 1939 until 1941, and as a United States Senator from 1941 until his death in 1954. Among Maybank’s many accomplishments in public service were restoring the Dock Street Theatre‘s facade and serving as chairman of the South Carolina Public Service Authority during the construction of the Santee and Cooper dams and hydroelectric station.

Wappoo Creek is historically significant for several reasons. On March 21, 1780, during the Revolutionary War, a small, unnamed skirmish saw the Patriots, grossly outnumbered, ambushed by British forces. One American was wounded and captured. Later, during the Civil War, Fort Pemberton was established on the creek’s James Island shore to protect the wealthy sea island from Northern attack.

The creek is primarily important, however, as the site of Bluff Plantation, where Eliza Lucas first cultivated indigo. Here, Lucas conducted her successful experiments in growing and harvesting the blue dye, which would go on to serve as South Carolina’s primary cash crop throughout much of the eighteenth century.