Did you know that even though Georgia calls itself the Peach State, South Carolina actually leads our neighbor in peach production? In fact, we lead all other states in the country except California. The delectable treat became the official state fruit of South Carolina in 1984 and has earned its place at the table, so to speak, with an annual harvest of over 90,000 tons. How ’bout them apples … er, peaches? The Peachoid, Gaffney‘s famous roadside attraction pictured below, depicts South Carolina’s sweetest bumper crop. 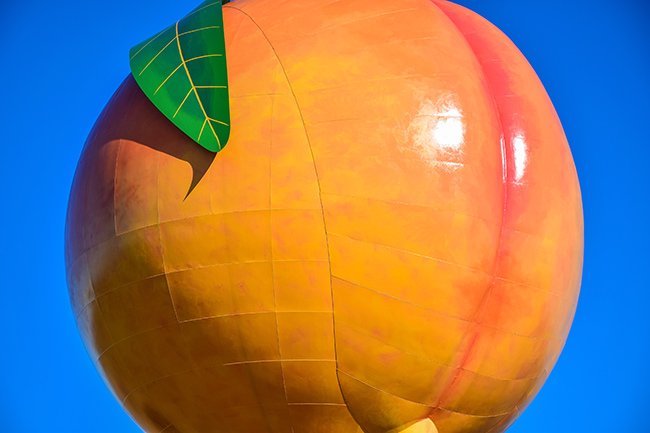 The idea of the Peachoid came to Gaffney Board of Public Works member Jack Millwood when it was decided that an elevated water tower was needed for the area. His famous words – “Let’s build it in the shape of a peach!” – are immortalized in the enormous depiction of the pitted fruit that looms over I-85. Built in 1981 over a period of five months, the iconic water tower features a cleft, a stem, and a seven-ton peach leaf. It holds one million gallons of water and can be seen between exits 90 and 92 off I-85.

Rodger Painter of Gaffney © Do Not Use Without Written Consent

Made to highlight the region’s favorite crop, the Peachoid’s colors are meant to reflect the varieties of peaches grown in the area. After the basic colors were applied to the tower’s various parts, original artist Peter Freudenberg used 50 gallons of paint and more than 20 colors to achieve the desired effect, seen in the photo immediately above. 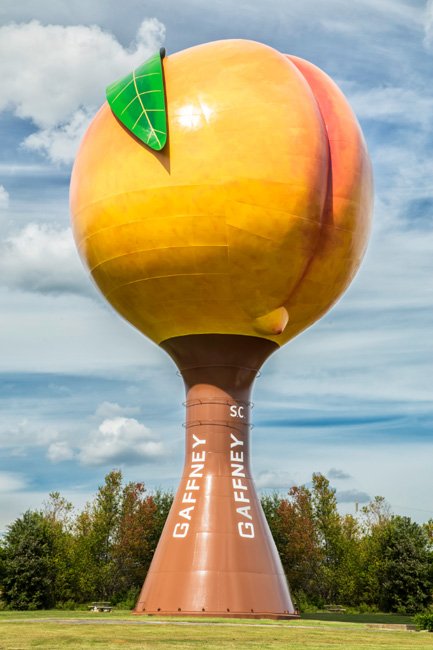 In 2015 mural artist Eric Henn of Ohio repainted the towering peach to give it a much-needed makeover, particularly now that the icon is prominently featured on the Netflix series, House of Cards. The results can be seen in the photo above. 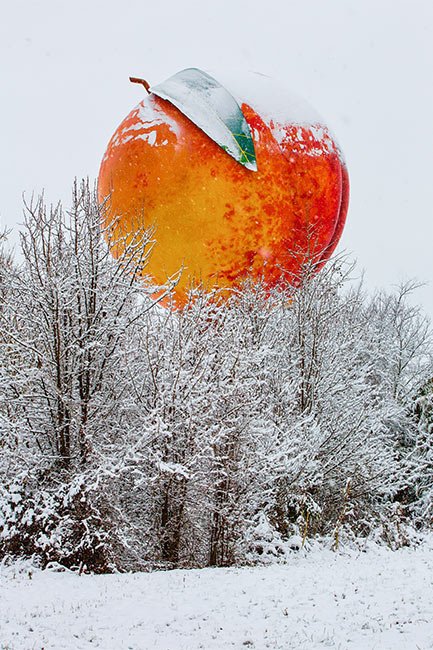 Brady Brandwood of Lake Wylie, 2018 © Do Not Use Without Written Consent

Rod Welch, a lifelong South Carolinian and the founder of SCIWAY and the SC Picture Project, shares these thoughts on the Gaffney Peachoid from 1997: “South Carolina has hundreds of water towers, most of which are rather ordinary. But one – Gaffney’s Peachoid – catches the eye. This ‘peach’ of a water tower is located on I-85 between Spartanburg and the North Carolina border and holds one million gallons. Until recently the Peachoid had some nearby competition: Two large, unused water towers in the center of downtown Spartanburg that were painted brown, green, and blue like the earth, trees, and sky. Both were torn down this past April to make room for a parking lot for the Spartanburg County Public Library’s new main branch. These two circular “skyscapes” looked a little childlike, and they always made me smile when I drove into Spartanburg. I miss seeing them and wish someone had made a Web page for them before they were destroyed.”