Possum Trot School is located in the upstate city of Gaffney. It was built in 1880 and is one of the few remaining one-room schools in South Carolina. The school was originally located on farmland in the Midway community just outside Gaffney. It was constructed by brothers Jimmy and Tom Pettit (with the help from other Cherokee County residents) and educated students through 11th grade. The name “Possum Trot” is a term used in the South to describe a shortcut between two rural homesteads or villages. 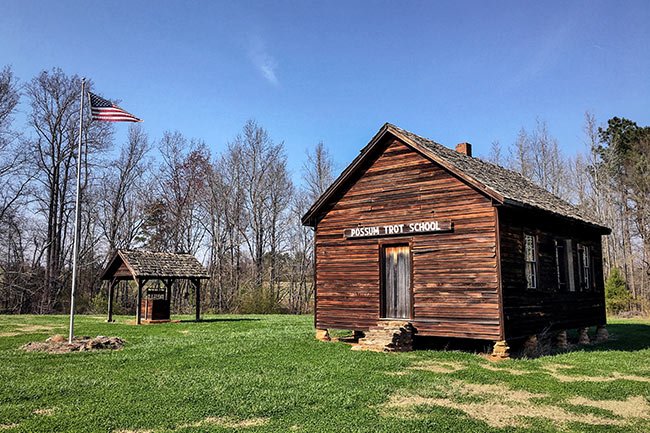 With the construction of newer, larger schools, Possum Trot School was abandoned and eventually fell into disrepair. In 1969, Louise Phifer Camp hired local builder Ernest Wyatt to restore the schoolhouse as a gift for her husband Bill Camp, a Gaffney native who attended the school with his siblings. Although the school had greatly deteriorated over the years, its foundation was still intact, which made it possible for Wyatt to restore the building to its original measurements. 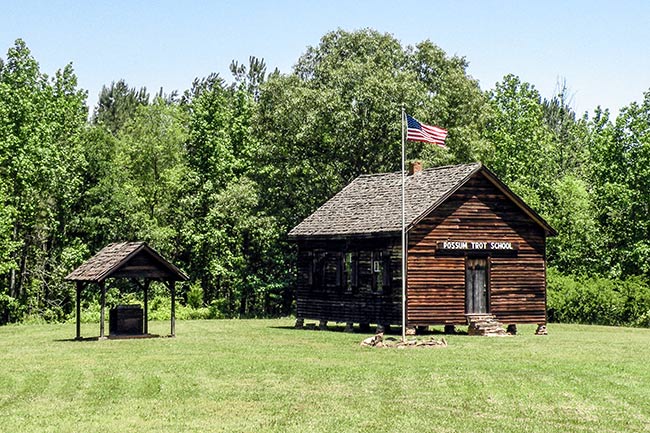 Due to a property transfer in 1992, the school had to be moved to its current location next to Hamrick’s department store on Peachoid Road. It now sits just a half-mile from the famous Gaffney Peachoid. 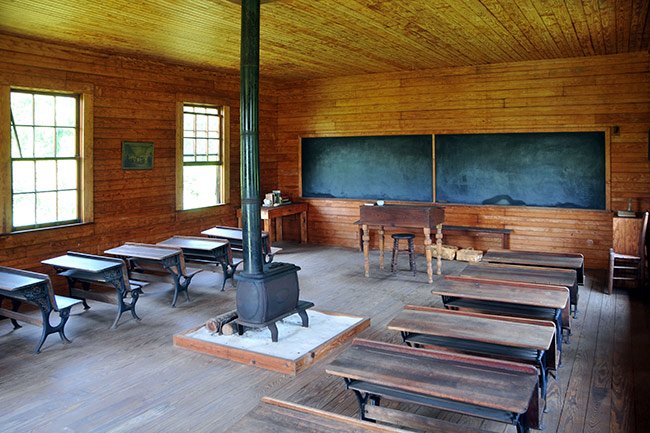 Rodger Painter of Gaffney, 2019 © Do Not Use Without Written Consent

Plans are in place to relocate Possum Trot once more. Moving the old school to the site of the Cherokee County History and Arts Museum will allow it to become an integral part of the community. The building is expected to be open to the public daily, whereas it is now open during special events only.

Photographer Rodger Painter, who shares the interior photo above, says: “I shot this on May 25, 2019, during the Cherokee Historical & Preservation Society’s 50th Anniversary Celebration. The old school currently is located at Hamrick’s property on Peachoid Road. Plans are to move it to the Cherokee County History and Arts Museum on College Drive where it can be better maintained and opened daily to the public. It currently is open only on special occasions.”