Aaron Burr, who served the United States as Vice President from 1801 through 1805, is a household name in Chester. In fact, this historic home, thought to be the oldest standing structure in Chester County, once housed the notorious vice president on his way to Virginia to stand trial for treason. Burr had been arrested in 1807 for the murder of Alexander Hamilton, whom he shot in a duel in Weehawken, New Jersey on July 11, 1804. Hamilton died the following day. Still in the role of Vice President, Burr briefly left his home state of New York for South Carolina. His daughter, Theodosia, lived in Murrells Inlet with her husband, Joseph Alston, at Oaks Plantation (now part of Brookgreen Gardens). Burr then returned to Washington, D.C. to fulfill the remainder of his term. 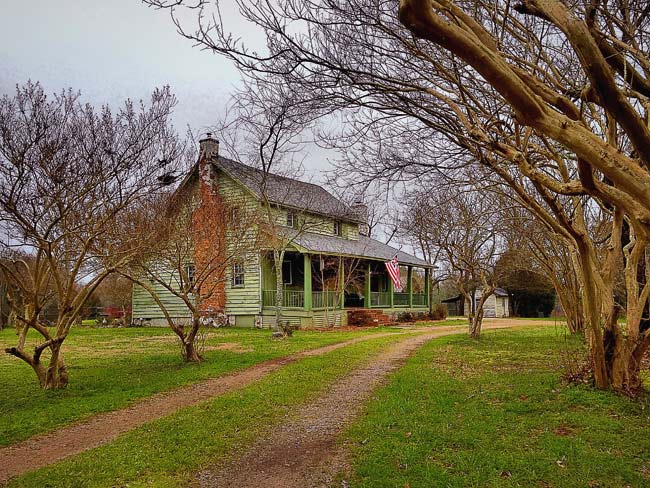 Following his term’s end in 1805, Burr traveled to New Orleans before he was finally arrested in 1807 for the murder of Hamilton. He and his guards passed through Chester on the way to his trial in Richmond, Virginia. Legend holds that when in town, he jumped from his horse onto a rock, pleading with the townspeople to rescue him. His cries ignored, Burr was instead locked up here, in the Lewis Inn, for the night. Burr’s infamy in Chester deepened when he allegedly tried to escape the inn after bribing a housemaid to leave a door unlatched. Though he was recaptured and taken to Virginia, all charges against Burr were eventually dropped. The rock where Burr stood to beg for his freedom is displayed in downtown Chester and is known as the Aaron Burr Rock; the road on which the inn stands is named Aaron Burr Road. 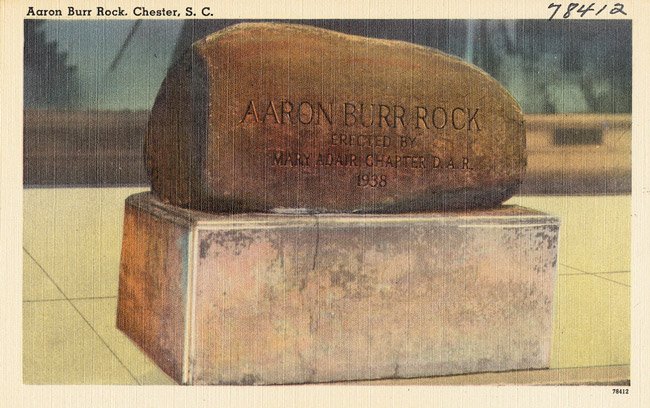 Despite the inn’s connection to Burr and the country’s most famous duel, the structure has historical value in its own right. Built of dovetailed logs in 1750, it sat on the Saluda Trail, once a popular stagecoach route. Large hand-carved mantels and wrought iron hardware grace the structure’s interior. Another tale from the inn dates to the Revolutionary War; in 1780 Colonel James Lyles died on the steps of the Lewis Inn during his attempt to get home and see his newborn daughter.

The former inn, which is now a private residence, has changed ownership many times over the generations. In the 1980s, new owners purchased the property from a local farmer and began restoring the house. During this period, many of the home’s original features were restored. For example, the home’s interior logs were exposed, and its exterior shingles, added in 1923, were replaced with the present siding.

The Lewis Inn is listed in the National Register:

This fine example of log construction with many original features, built about 1750, is one of very few remaining in South Carolina. The inn was a tavern during Colonial and Revolutionary days, and also a stagecoach stop. It was made famous in 1807 when Aaron Burr, the captured vice president of the United States, slayer of Alexander Hamilton, spent the night there on his way to Richmond for trial on charges of treason. Legend has it that Burr escaped briefly because a bribed maid left his bedroom door unlatched. The inn is a “matched” two-story house of dovetailed logs pinned together and chinked with clay, covered with clapboard, and re-covered with brown shingles in 1923. It has a lateral gable roof, with exterior end chimneys, and a one-story right wing. The matching sections – back is a one-story ell; the other is a front shed-roof porch which extends across the façade to the wing. The interior features tongue and groove paneling, large hand-carved mantels, wide board doors with wrought iron hinges, and a narrow stairway leading to a second floor hallway on which two bedrooms open.