The Lowrys community near Chester is home to the former People’s Free Library, built in 1903 by seasonal resident Dr. Delano Fitzgerald of Baltimore, Maryland. Dr. Fitzgerald, a pharmacist, enjoyed wintering in Lowrys, capitalizing on the area’s fertile hunting grounds. His generosity to the community made him well-liked among the permanent residents. 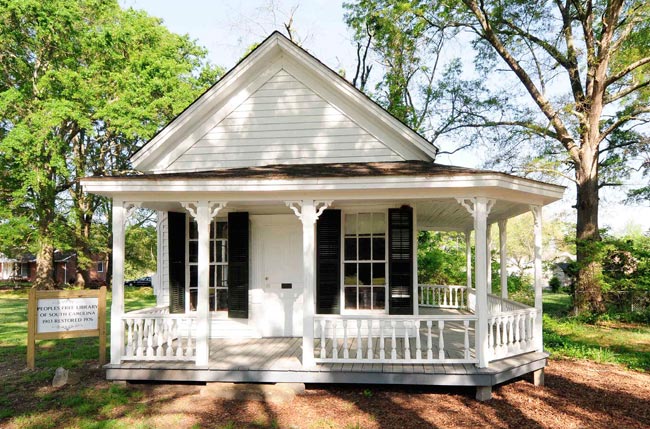 When Dr. Fitzgerald expressed interest in establishing a free library in the community, Lowrys resident J.S. Guy donated a lot for its construction. Guy stipulated that the library always have at least three trustees and that if the building were ever to cease being a library, it would become the property of adjacent Zion Presbyterian Church, which sits on a lot also donated by Guy. 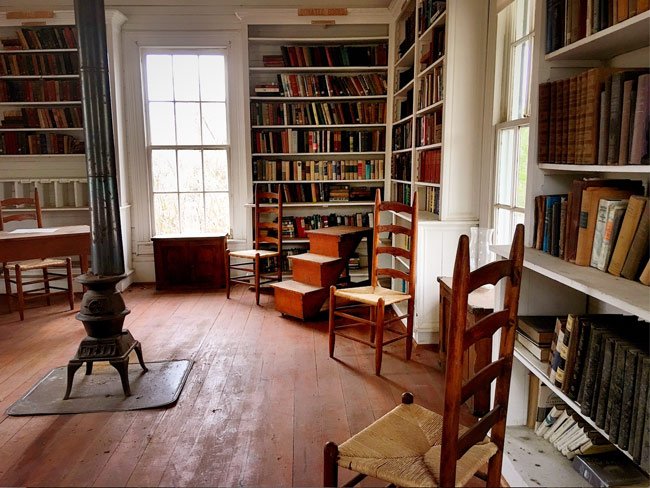 The People’s Library not only stocked popular literature and periodicals, but it also delivered books via a mobile service that operated from a mule-drawn wagon. This “traveling library” served residents throughout Chester and York counties and is thought to be the country’s first bookmobile. Ten wooden boxes were used to contain the books during deliveries; five of the original boxes remain in this building, four are displayed in the present Chester County Library, and one is kept in the South Carolina State Library.

The library itself was ample, boasting 1,381 volumes. It closed in 1924 but reopened in the late 1930s as a branch of the Chester County Library System. However, it closed again in 1954 due to low usage. Following the wishes of Guy, the building was then deeded to Zion Presbyterian Church, which still owns the former library. Today the building serves as a museum.

The People’s Free Library is listed in the National Register:

The People’s Free Library of South Carolina was established in 1903-04 by Dr. Delano Fitzgerald, a winter resident of Lowrys, and the small frame building was completed ca. 1904. Fitzgerald was a Baltimore, Maryland pharmacist who wintered in Lowrys to take advantage of the fine hunting in the area. The library made a significant contribution to the cultural and intellectual development of Lowrys and the surrounding areas between 1904 and 1954 and continues to serve as a museum and community landmark. The library operated a travelling library service from 1904 until at least 1909, perhaps the first such service in the state. The library is a small, one-story building with a single room. The building is rectangular with a gable roof, weatherboard siding, and stone foundation piers. A wooden porch spans the façade and the right side. The porch has chamfered wooden posts with reeding and sawn brackets and a balustrade with turned balusters.