The town of Cheraw is haunted by its Civil War history – some say literally. This farmhouse – called the Brown House due to its formerly unpainted facade – was built in the early 1800s and has remained primarily in the Harrington and Duvall families over the years. However, at least one resident seems determined to stay. 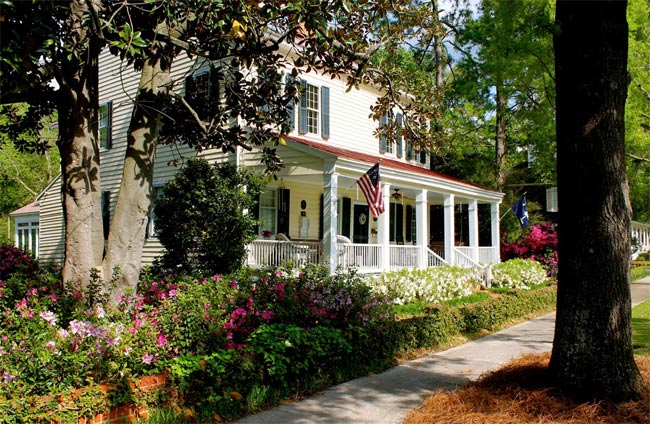 According to legend, strange happenings leave people to conclude the home is haunted. For example, furniture reportedly has been rearranged without the help of a human hand, some even say moving across the porch floor in plain sight. Whether or not you believe in ghosts, this home adds to the charm and beauty of Cheraw’s historic district.

Reflections on the Brown House

Many thanks to David Sides, Cheraw Director of Tourism and Community Development, for sharing the above photo and much of the information. David says, “Do you believe in ghosts? This Greene Street home, noted for many years as The Brown House due to its unpainted exterior, has had some eerie happenings reported throughout the years. On more than one occasion, former residents have given accounts of the front porch furniture mysteriously moving across the floor without a soul in sight.

“This classic upcountry farmhouse, constructed in the early 1800s, is one of Cheraws oldest residences. Originally built as a one-story four-room cottage, when the second floor was added, the stairs descended to the back porch rather than the front hall. For much of its’ 200-year plus history, the home was owned by the Harrington and Duvall family and was passed from generation to generation.”