This cheery picture of Town Hall showcases Cheraw during its annual ChristmasFest. Construction on the building began in 1858 under the tenure of Mayor Robert Kendall. A tornado hit Cheraw while it was being built and toppled much of the second floor into Second Street. As a consequence, the building was not finished until 1860. 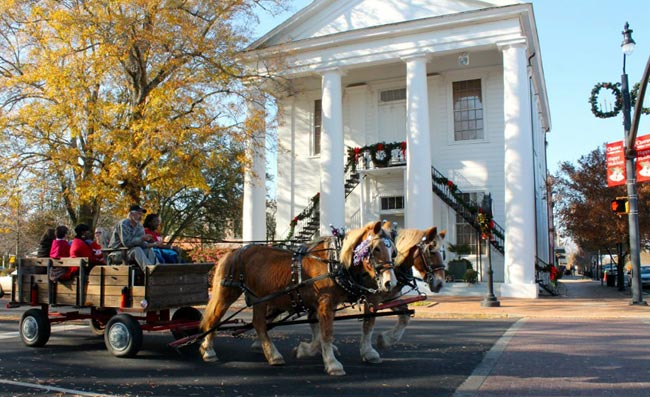 David W. Sides of Cheraw, 2012 © Do Not Use Without Written Consent

There are two theories regarding the builder. Some sources say it was built by Irish immigrant and master carpenter Conlaw Peter Lynch. Lynch was a resident of Cheraw and constructed other local landmarks including Market Hall, St. Peter’s Catholic Church, and Old Merchant’s Bank. Other sources say William Murray of Anson County, North Carolina served as the contractor. 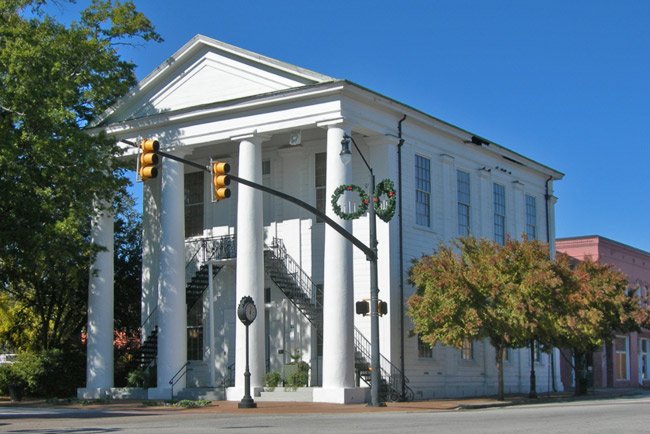 Jimmy Emerson of Dalton, Georgia, 2010 © Do Not Use Without Written Consent

In either case, we do know that funding was provided in part by Cheraw’s Masonic Lodge. Members were in turn awarded a 99-year lease on the second floor of the town hall, and they met here until 1950, just a decade shy of the full term. A year earlier, in 1949, the Town of Cheraw expanded its offices within the building – adding two courtrooms. The Masons moved their operations to a new structure at 213 Third Street where they still gather today. 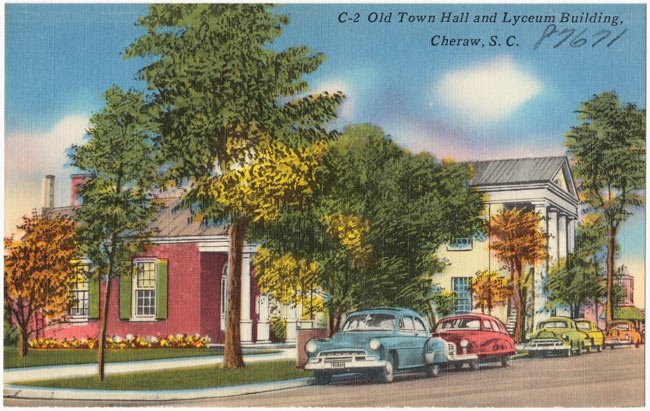 The ironwork on the second-floor landing and exterior double staircase was designed by Christopher Werner of Charleston. Other notable works attributed to Werner include the Sword Gates at The Citadel, the gate of Hibernian Hall, and the intricate ironwork of the John Rutledge House, all located in Charleston. 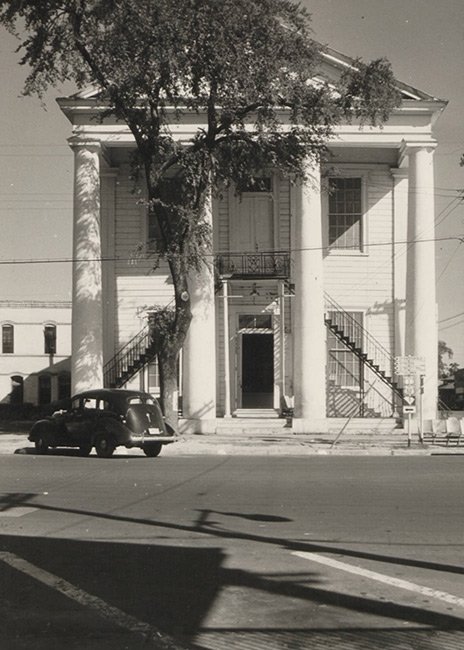 The building also served as both an opera house or theater at one time, as well as a Confederate hospital during the Civil War. On March 3, 1865, the building stood in the center of a skirmish when Union troops chased Hardee’s Rear Guard to the Great Pee Dee River. Hardee was forced to abandon the hospital at that time. 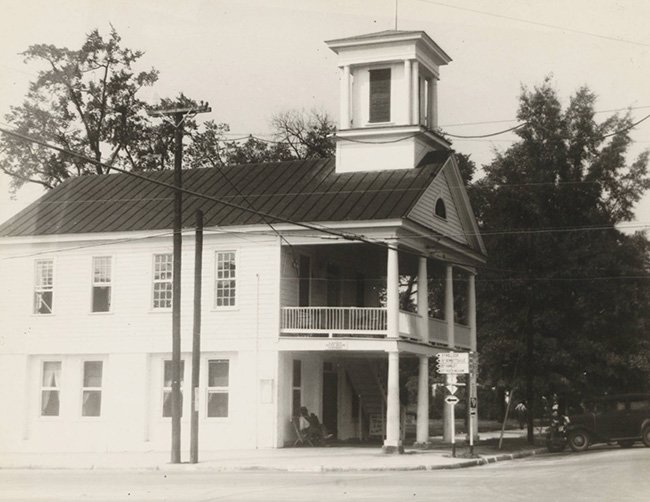 The Cheraw Town Hall received electricity in 1903 and was renovated in 1978. It is listed in the National Register as part of the Cheraw Historic District:

In an effort to document the history of Cheraw’s Town Hall, we are including the following newspaper article. Written by Edna Rae Covington, it appeared in the Florence Morning News on Sunday, May 10, 1959. A full transcription can be found below.

CHERAW – A little over 200 years ago the first white settlers came up the Great Pee Dee River and formed a little settlement at the head of navigation and in 1769 the town of Cheraw was formally laid out.

Cheraw as early as 175(?) was a village and a trading point with the Indians. The name was taken from the tribe of Indians that lived in this section – the Cheraws – which was a part of the Cherokee nation. The name Cheraw is a contraction of Cherokee.

These Indians numbered possibly less than two hundred and had not lived here more than 25 years when the white man came. The Indians remained here, thought gradually growing fewer in numbers, until about 1930, or a century after the first white settlers arrived.

The land which is now the Public Square was deeded to the town by Eli Kershaw in 1769 and a provision o the deed cited that it was only for public use, and if used for any other purpose the land was to revert to the Kershaw heirs.

Cheraw’s town hall, center of city government, was built on the Square in 1858. Robert Kendall was, mayor at the time. There is no record of what the building cost. While erected out of wood, the weather building was cut to resemble stone, and for years it was painted a stone gray an many thought it was stone.

The two-story building was built by William Murray of Anson County, N.C. During its construction, a cyclone hit Cheraw and blew part of the building down on to Second Street. Christopher Werner, celebrated for his wrought-iron work in South Carolina, is said to have made the iron steps and the iron grill work on the second-floor landing of the town hall.

Two of the best examples of his work are said to be the Palmetto Tree on the State House grounds in Columbia and the famous Sword Gates in Charleston.

The SECOND STORY for many years was the home of one of the oldest Masonic lodges in America. In return for some money contributed for the erection of the building, the second story was leased to the Masonic Lodge for 99 years. However, in 1950 the Masons had a new building erected on Third Street.

For many years dances and balls were held on the second floor. A ball some 80 years ago was notable as it was attended by the daughter of Stonewall Jackson, who was visiting friends in Cheraw.

For years the bottom floor was used by theatrical troupes that visited Cheraw and for public gatherings. In 1949 the floor was divided. Police headquarters was moved into one section of the building and the clerk of court’s office occupies the left secion, with the city court room at the back of the building. The top floor is now used only occasionally. The police radio control system is located on this floor.

Years ago, a colored boy who lived in Cheraw all his life said, “I thought the town hall was the tallest building in the world until I went to New York City and saw the Empire State Building.”

Once when there was an airport near Cheraw, an old colored man upon trying to be persuaded to go up in the airplane for two dollars a ride replied, “No suh, the Town Hall is as high as I want to go and I can walk up those steps free.”

Other points of historical interest in Cheraw include the Cheraw Lyceum, created about 1824, to be used as a court of equity. It is now used as the Cheraw Library. The Market Hall was built in 1836 by Peter Cownlaw Lynch and here mortgaged slaves were sold by the sheriff.

In the Inglis-McIver Law Office, used as an office by many famous attorneys in early Cheraw, much legal history was written. In 1947, the building was moved from Front Street to the town green and is now being used as the executive office of the chamber of commerce.

St David’s Episcopal Church was built 1768-1772, permission being granted by King George III of England and the original building stands.

In 1758, Thomas Lide deeded a plot to St. David’s parish, to be used as a cemetery. In St. David’s Cemetery soldiers from eight wars are buried. Here in 1867 was erected the first monument ever erected to the memory of Confederate soldiers.

The old Bank Building, constructed in 1833, once housed the Merchants Bank of South Carolina, at one time the state’s largest bank, and the last bank in the south to honor Confederate money.

The Cotton Gin on Front Street and was probably built around 1751, and is older than St. David’s Church. The first cotton mill in the South was near Cheraw, 1812, and the first mules introduced into the old South came to near Cheraw in 1826.

Today, Cheraw is a thriving little city. The new chesterfield County memorial Hospital and three medical clinics are located in the town.

Cheraw is the home of the first State Park in South Carolina containing nearly 6,000 acres, on which a three-hundred acre lake with cabins, bath houses and other recreational facilities are included.

The park, which adjoins the 100,000-acre government reforestation and game preserve, marks Cheraw as an outstanding playground for fisherman, the hunter, and the lover of nature. In summer months it attracts between 6,000 and 7,000 visitors each week.

Cheraw claims to be the “prettiest town in Dixie” and is laid out in the form of a square. Its blocks are 600 by 900 feet. These are bordered by massive oaks and elm trees.