Lake Marion is the largest lake in South Carolina, covering over 110,000 acres and 511 miles of shoreline across five counties – Berkeley, Calhoun, Clarendon, Orangeburg, and Sumter. Both Lake Marion and Lake Moultrie were created in the early 1940s as part of the Santee Cooper Project. The Santee Dam was built in 1942 and formed Lake Marion by damming the Santee River. 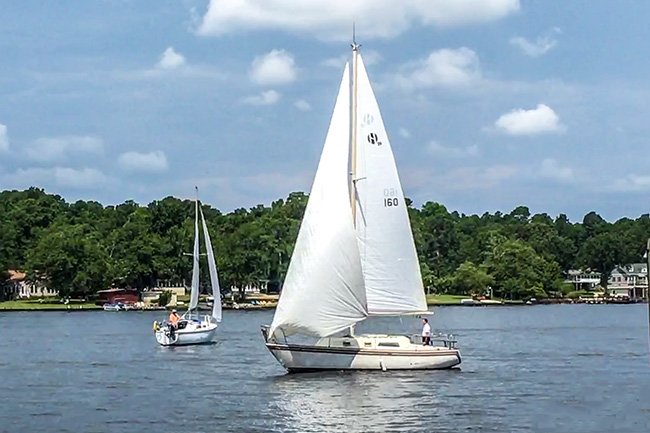 Carol Mintz of Manning, 2018 © Do Not Use Without Written Consent

The Cooper River was also dammed during the same project, which led to the creation of Lake Moultrie. The two lakes are connected by a diversion dam that stretches six-and-a-half miles. 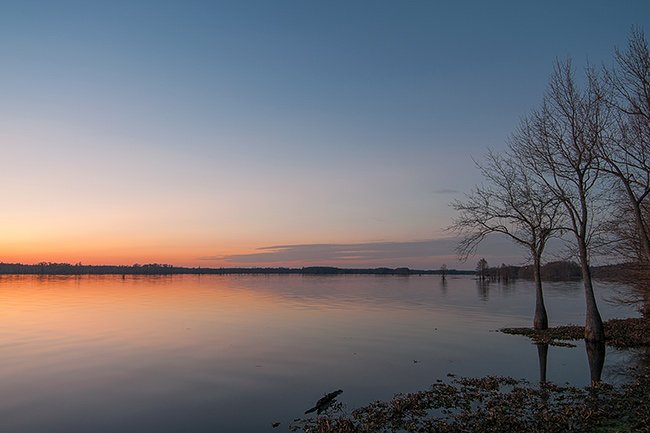 Derek Thornton of Greer, 2015 © Do Not Use Without Written Consent

Lake Marion is named for Revolutionary War hero General Francis Marion. General Marion’s former plantation, Pond Bluff, was submerged in the Santee Cooper Project, along with many other plantations, homes, and churches. 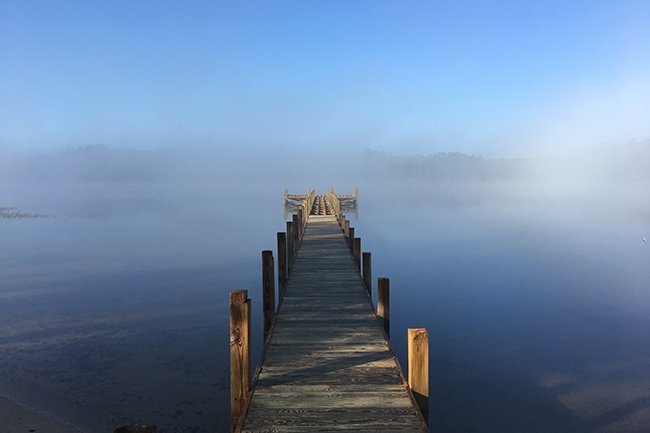 Brandon Elvis of Loris, 2019 © Do Not Use Without Written Consent

The project was part of President Roosevelt’s New Deal, which aimed to create jobs, improve navigation, and provide hydroelectricity for rural areas. At the time it was the the largest land-clearing project in the nation’s history, with over 12,500 South Carolina workers clearing over 177,000 acres of swamp and timberland. However, the lake was created before the land was completely cleared, and several trees – and tree stumps – stand within the lake. 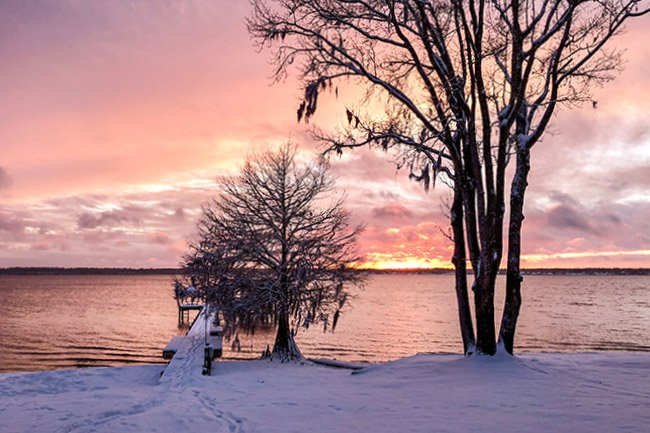 Roxeanne Still of Summerton, 2018 © Do Not Use Without Written Consent)

Lake Marion is a favorite spot among boaters and anglers. It is known for its abundant population of large bass and catfish due to the prime habitat found within the vegetation that remained uncleared before the lake filled. In fact, the lake is home to several state fishing records, including the record for biggest largemouth bass at 16.2 pounds.

Various access points and boat landings allow everyone the opportunity to enjoy Lake Marion. Potato Creek Landing in Summerton is a fisherman’s delight, while other outdoor lovers can enjoy the abutting Santee National Wildlife Refuge. 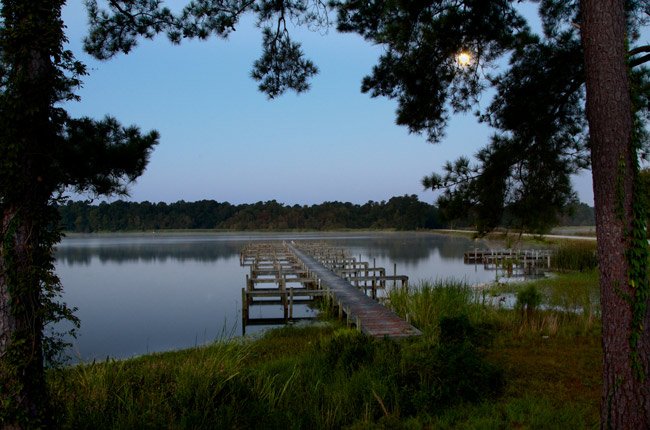 Chris Walsh of Manning, 2014 © Do Not Use Without Written Consent

Randolph’s Landing is a family-owned business and much more than a boat landing. Located at the north end of the dam, guests can spend the day on the lake or stay overnight at the landing’s motel. Campers can even rent a spot within the Randolph’s Landing campground that offers full RV hookup. A restaurant, Fayz Place, provides meals for those who don’t catch them from the lake. 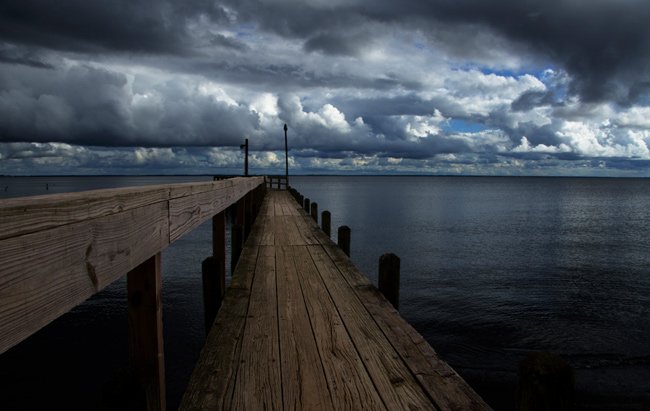 The Santee Cooper Resort is a gated residential community along the banks of Lake Marion, outside of the town of Santee. The resort consists of 300 private residences and touts to have low-traffic streets and towering trees with tropical flowering plants. The resort also contains one of the finest golf courses in the area and a marina for residents of the community. The photo is looking towards Clarendon County. 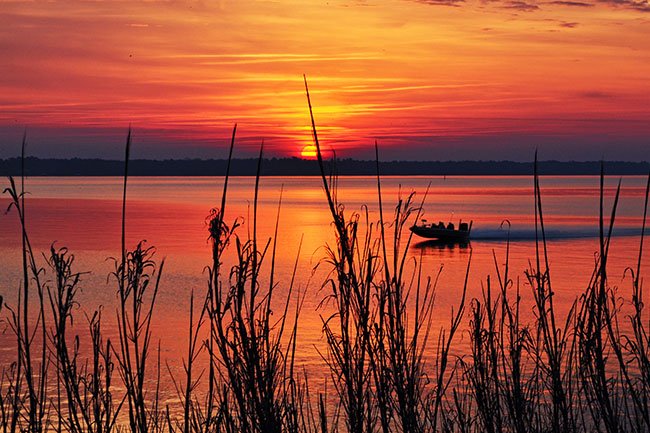 Michael Tillison of Orangeburg, 2014 © Do Not Use Without Written Consent

Lynne Branham of White Rock shares this lovely story of capturing the photo below, which was taken at Camp Bob Cooper on Lake Marion:

Just before dawn on any body of water is one of the most beautiful times of the day for me. Sunrises and sunsets are what most people enjoy, but that time right before the sun breaks over the horizon in the morning is what I set my alarm clock for. The wading birds are already fishing for breakfast, the birds are up and singing their hearts out, and as South Carolina weather goes, it is probably the coolest part of the day.

I search the day before for my subject matter and head out in the dark the next morning to set up my camera and tripod. The vivid colors you can capture at this time of day are sometimes surprising. That is why this image of a dock on Lake Marion is special to me. It took some planning and effort to capture the beautiful soft blue tones against the silhouette of the dock rails, but my reward is that I now have this image forever. Once I turn grey and can no longer get around the state to photograph, I will look back at these images and recall every part of the journey I traveled to get to this photograph. 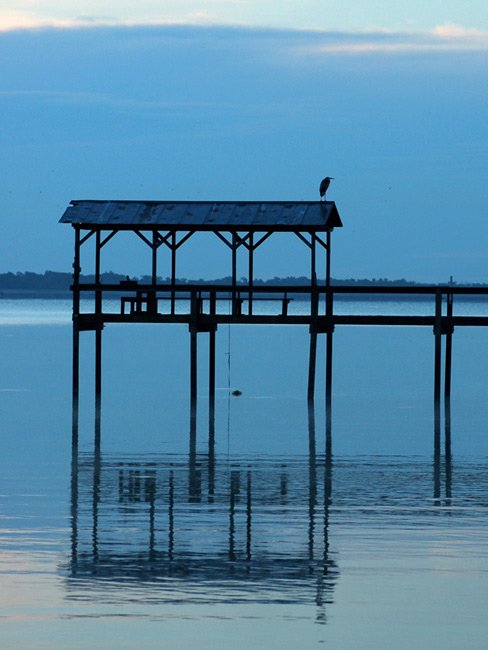 Lynne Branham of White Rock, 2007 © Do Not Use Without Written Consent