Located in the Santee National Wildlife Refuge, this Santee Indian mound is one of several known prehistoric Indian mounds in South Carolina. According to the United States Fish and Wildlife Service, it is thought to be around 3,500 years old, serving as a ceremonial and burial site for the local Santee Indians. 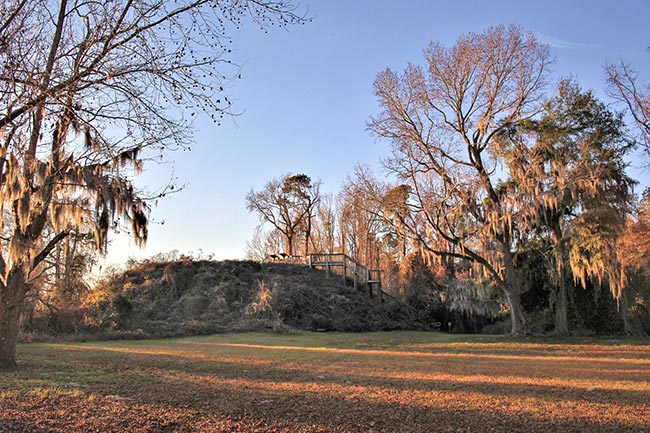 The Santee held elaborate burial rituals. They buried chiefs, shaman, and warriors on earthen mounds. A structure made of wooden poles was placed on top of the mound to protect the body. Relatives hung offerings such as rattles and feathers on the poles. The height of the burial mound indicated the importance of the deceased. 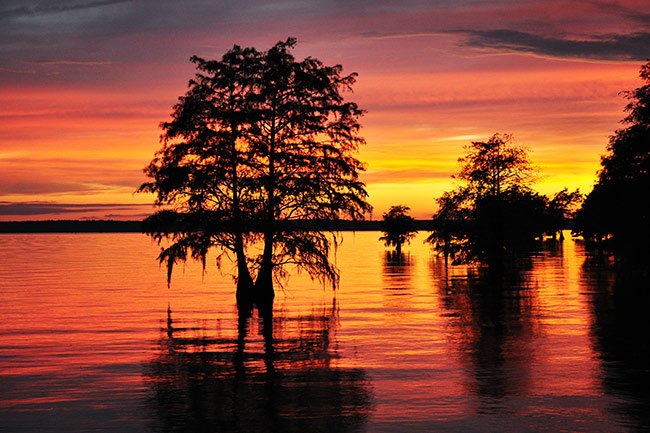 Common people were buried by wrapping their bodies in bark and setting them upon platforms. The closest relative of the deceased would paint his or her face black and keep a vigil at the grave for several days. After a time, corpses were removed from the burial site and their bones and skull were cleaned. Families placed the bones of loved ones in a box and cleaned and oiled them each year. 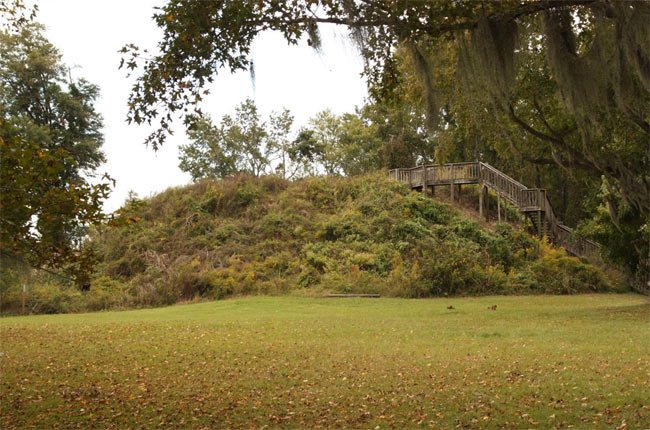 British forces built Fort Watson upon the Santee Indian mound during the American Revolution. On February 28, 1871, General Thomas Sumter attempted to seize the fort, but failed. 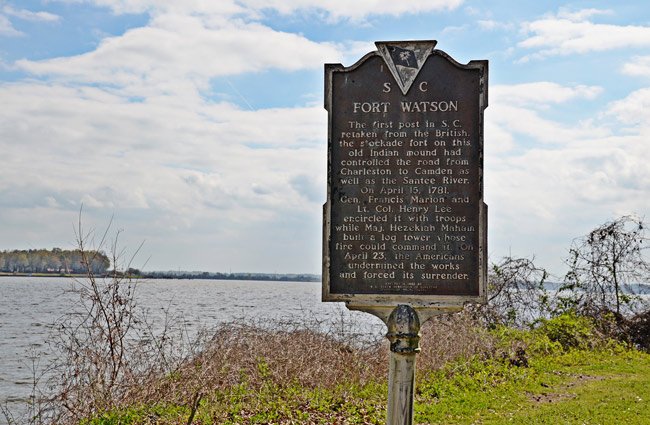 A second attempt to take the fort occurred on April 15th, when General Francis Marion and Henry “Light Horse Harry” Lee and their men surrounded the British post, biding their time to execute an attack. 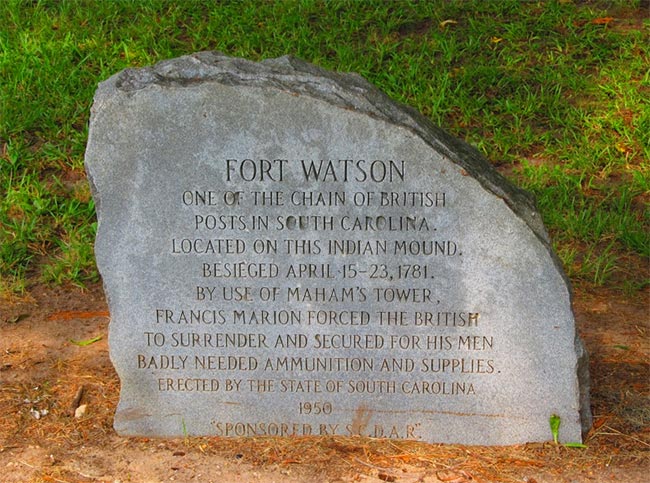 Kelly Lee Brosky of Conway, 2012 © Do Not Use Without Written Consent

The troops, led by Major Hezekiah Maham, built a tower during the night on April 22 that was even higher than Fort Watson. At dawn on April 23, the militia attacked the British, effectively claiming the post. 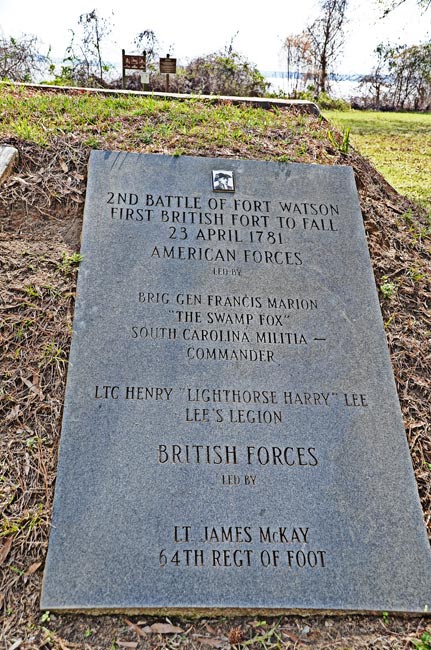 Even though no remnants from Fort Watson remain, an observation deck at the top of the mound features sweeping views and gives visitors a feel for the perspective that both the British troops and the militia had from atop the burial site. 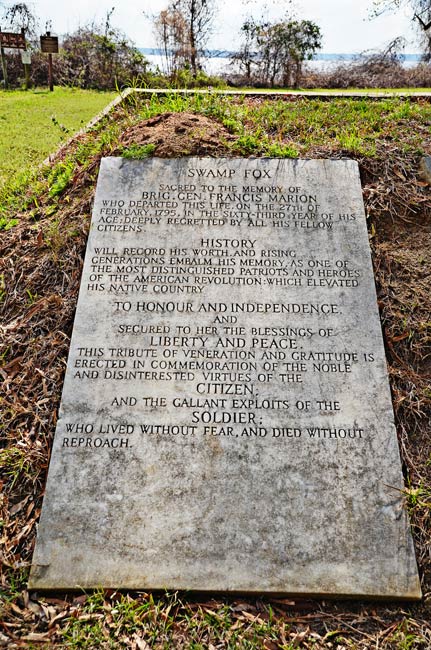 Above, a marker commemorates General Marion, who was instrumental in retaking Fort Watson from the British.

At the bottom of the Santee Indian Mound is part of Lake Marion known as Scott’s Lake. General Marion knew that the lake was a source of drinking water for the British troops and strategically positioned his men so as to shoot the British as they collected water. 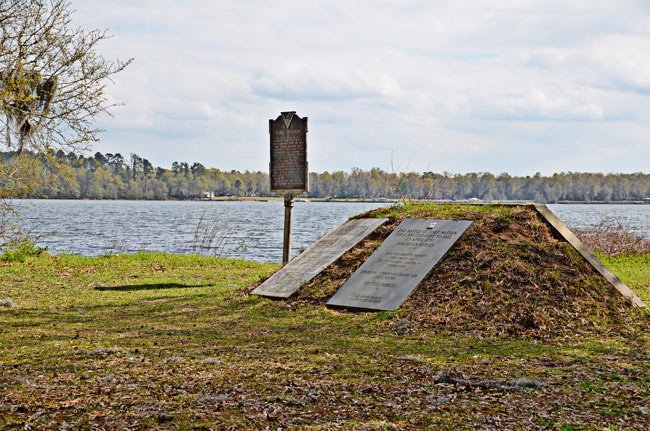 However, according to Linda Brown, “This was one of the few times, General Marion was ‘outfoxed’ by the British. Lieutenant James McKay, in command of the British forces, realized that as close as they were to the lake, it would be easy to dig a shallow well, which his troops quickly did.” 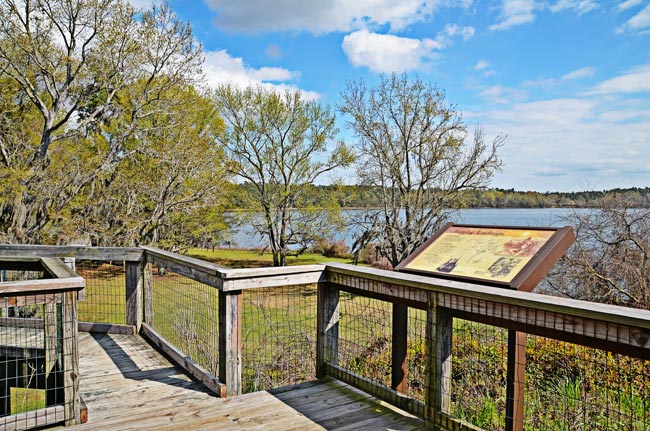 She continues, “Once Marion understood that the British had a means to provide water without exposing themselves, he and Lieutenant Colonel Lee knew they had to come up with another means of routing the foe, which took shape in Major Maham’s log tower.”

The Santee Indian Mound and Fort Watson are listed in National Register:

Santee Indian Mound was part of a mound village complex; it was probably a burial and/or temple mound, likely constructed in some cultural period between 1200-1500 AD. Santee Indian Mound and a probable low earthwork remain intact except for the superposition of eighteenth-century fortifications on top of the mound. The fortification, British Revolutionary War post Fort Watson, was built from 30 to 50 feet high atop the mound.

In 1780, Francis Marion and Light Horse Harry Lee decided to capture the fort. Bombardment was out of the question, for the Americans were without artillery, but Colonel Maham, one of Marion’s officers, proposed building a log tower higher than Fort Watson. Hidden by trees, men hewed logs and the tower was erected in a single night. At dawn a shower of lead poured down into the enemy enclosure, effecting a quick victory. Fort Watson was the first fortified British military outpost in South Carolina recaptured by patriot forces after the British occupation of 1780. There are no remains of Fort Watson on the site.