The historic district in Darlington is lined with beautiful structures designed and built by self-taught African-American architect Lawrence Reese. Born in either 1864 or 1865, Reese grew up in the Sand Hills community of Bennetsville in Marlboro County. His parents, Richard and Fannie, had nine children, and he was their youngest son. Farmers by trade, his father and older brothers also practiced carpentry, and when Reese relocated to Darlington in 1887, he became a carpenter himself. 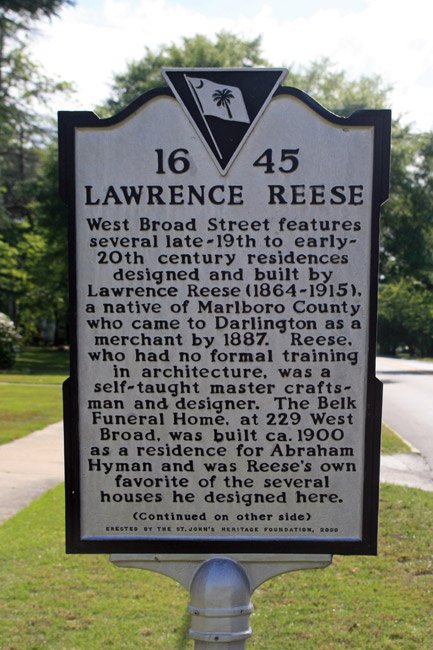 Local lore says that upon moving to Darlington, Reese fell in love with a young Cherokee woman named Lula Aiken. Since Reese was still unknown at that time, Aiken’s guardian, Dr. McGirt, instructed him to prove his professional claims by building a small home on a portion of McGrit’s land. Reese undertook the project quickly and earned Dr. McGirt’s blessing for marriage. 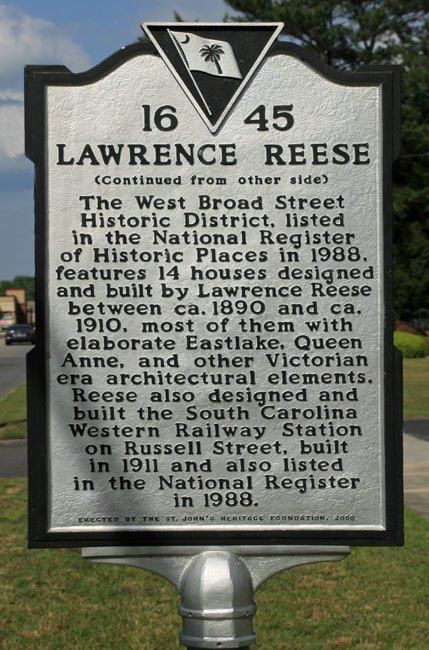 His gifts as a builder were matched by his talent in architectural design, and as a result, Reese contributed to some of Darlington’s most cherished and well-known structures. Among buildings designed and built by Reese are the South Carolina Western Railway Depot, the Abraham Hyman House (now the Belk Funeral Home), and several other historic residences, including the Reese family home at 434 West Broad Street.

Reese’s sons also learned the family trade and worked alongside Reese in constructing many of the structures in Darlington. Reese, a multifaceted businessman, operated a grocery store and built caskets as well, even supplying a hearse for what he called his “undertaking business.” Much of the above information is attributed to the Belk Funeral Home.

Most of Reese’s works were designed in the Queen Anne and Eastlake architectural styles. Several homes built by Reese are listed in the National Register in the West Broad Street Historic District:

The West Broad Street Historic District is a significant collection of intact residences which were constructed between ca. 1890 and ca. 1928. Most of the residences are grand in scale and reflect the prosperity of the individuals who built them. Several of the houses were owned by some of Darlington’s most prominent citizens. The district, which includes a basically intact section of a residential neighborhood, contains 34 houses and four noncontributing properties within its boundaries. Most of the residences are large, two-story frame Victorian or Queen Anne structures with decorative woodwork. The dwellings are set on deep lots that are planted with large trees and shrubs. A number of these large residences are similar in appearance and were built by master carpenter Lawrence Reese. Also included in the district are thirteen modest, one-story frame houses with a few decorative features, as well as two imposing brick bungalows.