This 1890 home in Dillon was built for James W. Dillon, namesake of the Pee Dee city as well as Dillon County. A few years prior to the building of the Victorian home, the Florence Railroad was planning a rail line from the border of North Carolina to the heart of the Pee Dee; however, the company was having difficulty acquiring land for the project. Dillon, a merchant from Little Rock, saw an opportunity and acquired around 50 acres of land around five miles outside of Little Rock. He then made a deal with the railroad company, offering it a 50 percent interest in his land in exchange for laying tracks across the property. The railroad company accepted the offer, and the railroad was built along with a depot. The town, named for Dillon, received its charter in 1888. The Florence Railroad became part of the Atlantic Coast line Railroad in 1898. 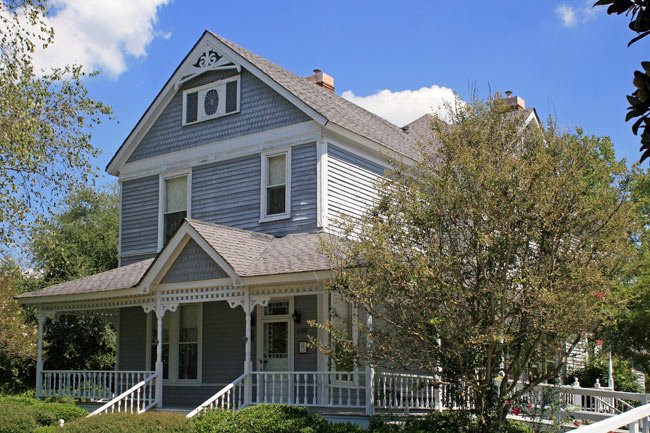 Though an official municipality by then end of the nineteenth century, Dillon was in Marion County until 1910. Dillon County was created after farmers in upper Marion County petitioned for their own county. The farmers felt that their land in the upper part of the county was being overtaxed, while they had no political representation in their corner of the county. Dillon County, also named for James W. Dillon, was chartered in 1910. 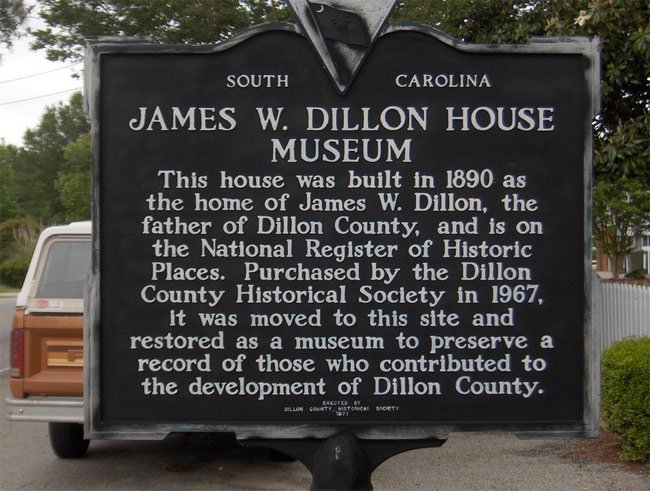 Edward Heintz of Erie, Pennsylvania, 2009 © Do Not Use Without Written Consent

The James W. Dillon House is listed in the National Register:

The James W. Dillon House, a significant, historical landmark in Dillon County, is representative of Victorian architecture and the town’s founding. Built in 1890, this two-story, white frame house was the home of James W. Dillon, founder of the town and man for whom the county was named. A one-story veranda extends across the façade and three-fourths of the southeast elevation. Other notable details include lattice work beneath the veranda’s cornice, carved posts with cornice braces, scalloped shingles in gables, and an ornate front gable decorated with gingerbread trim, rectangular louvers, and oval window with sunburst design. In 1888, Dillon acquired forty acres of land in what is now the city of Dillon. Simultaneously the Atlantic Coast Line Railroad Company began plans for extending its rail line from Wilson, North Carolina to the Pee Dee region of South Carolina. Dillon offered the railroad company fifty percent interest in his land if it would route the railroad through this forty-acre tract. After the contract was signed, a depot was established, and the proposed town of Dillon became a reality. In 1910, when Dillon County was formed from the upper section of Marion County, citizens of the new county voted to name it for James W. Dillon.