Though not located within the Colonial Dorchester State Historic Site, the Old White Meeting House and Cemetery in Summerville were once part of the settlement called Dorchester. The ruins within the cemetery are remnants of the first European settlers to the area. On December of 1695, a group of Congregationalists from Dorchester, Massachusetts, arrived on the schooner Friendship to settle on the banks of the Ashley River with their minister, the Reverend Joseph Lord. 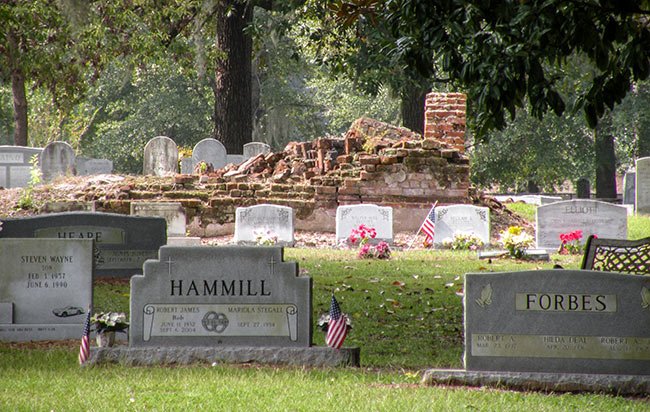 The group quickly designed a small village after their home township, even giving the hamlet the same name. In 1696 they built a simple wood frame meeting house for worship services. By 1700 the Congregationalists replaced the wood building with one made of brick (ruins pictured above) and called it the White Meeting House after the Reverend John White of Dorchester, England. However, in 1706, the Church of England adopted the Church Act, making the Church of England the official denomination of the colony, and parishes were established. Dorchester belonged to St. Andrew’s Parish until 1717 when the parish was further divided, creating St. George’s Parish which encompassed Dorchester. The St. George’s Anglican Parish Church was built within the parish by 1720. Decendants from that church later formed St. Paul’s Church in Summerville. 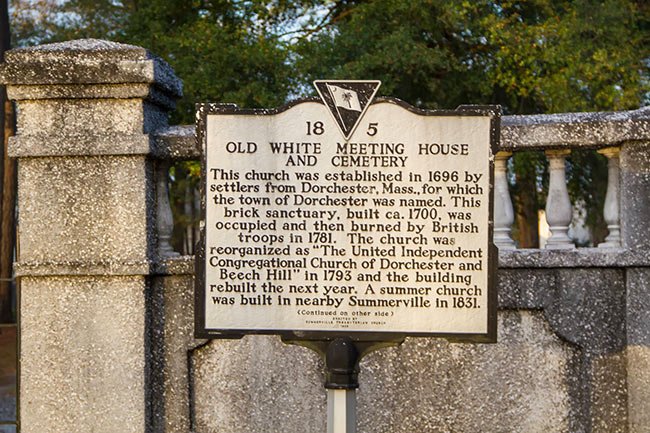 The “dissenters,” as the Congregationalists were called for “dissenting” from the Church of England, continued worshiping at the White Meeting House, though some left for the government-supported parish church. Dorchester had become successful as a trade village, and many settlers wished to find further prosperity among the fertile river banks as planters. However, the plots of land on which the group had settled were not big enough for large-scale planting, so many abandoned the settlement for the Midway River in Georgia in 1753 after receiving two land grants there totaling 32,000 acres. Dorchester became dependent mostly on the Anglicans to stay economically viable, as the remaining Congregationalists had moved to larger plantations nearby. 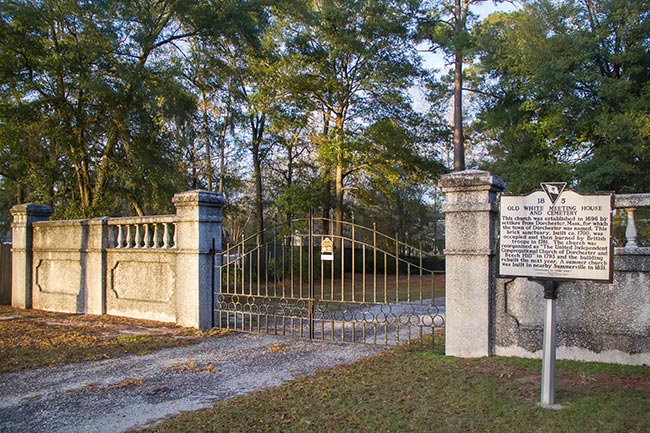 Much of the Dorchester settlement was burned during the Revolutionary War, and the town was deserted by 1788. As a result, a new settlement nearby began to take shape due to its well-drained sandy soil that provided relief form the mosquitoes that breed in the still waters of the swampy bogs along the river. This new settlement was called Summerville, as many planters came here for relief during the height of the mosquitoes’ active season in the summers. 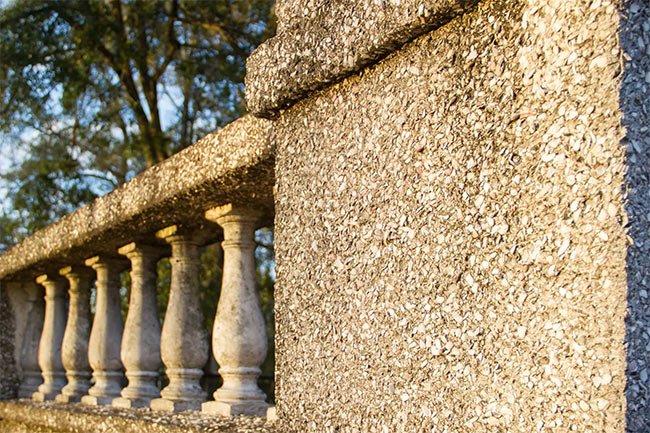 New Congregationalists as well as a few remaining descendants of the original group rebuilt the White Meeting House in 1794, which had suffered damage during the war. They worshiped here until building their own church within the new village in 1831, which they called Summerville Presbyterian Church. On August 31, 1886, a great earthquake severely damaged much of the Lowcountry, including the White Meeting House and what little remained of the old Dorchester settlement. The earthquake’s epicenter was near Middleton Place, not far from Dorchester and the White Meeting House, bringing most structures that remained to rubble. 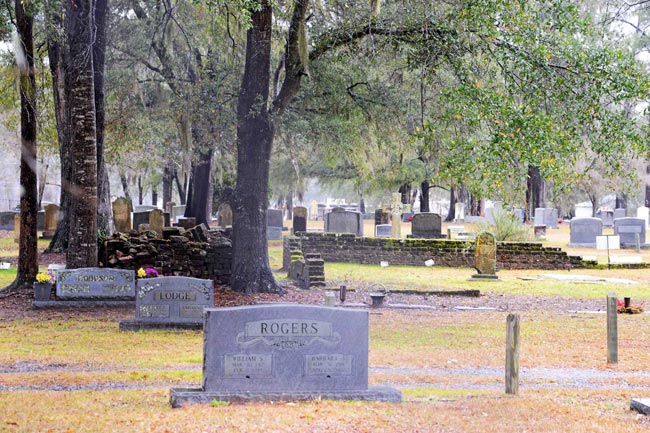 The ruins of the Old White Meeting House and the Cemetery are owned and managed by Summerville Presbyterian Church. The cemetery is the burial ground for the church and remains active. Its earliest marked graves date to the 1760s.

The Old White Meeting House Ruins and Cemetery are listed together in the National Register:

Old White Meeting House was built ca. 1700, burned during the American Revolution in 1781, rebuilt in 1794, then reduced to ruins by the Charleston Earthquake of 1886. Constructed of brick and covered with stucco, it conformed to the typical “meeting house” plan of the colonial period, featuring a square building with a pyramidal roof. The dimension of the Old White Meeting House as rebuilt in 1794 were 30’x30’. The extant ruins include portions of each corner-the largest approximately 9’ high-and significant remnants of the foundation of walls, clearly outlining the historic form, plan, and size of the meeting house. The cemetery, which also contributes to the significance of the nominated property, surrounds the meeting house ruins and is laid out in a regular grid plan, with little discernible landscaping or other planned features other than an entrance gate and a few deciduous or evergreen trees shading particular family plots. Grave markers are primarily granite or marble tablets, obelisks, and table-top stones. The first marked graves in the cemetery date from the 1760s, and most burials date from the nineteenth century.