This late nineteenth-century home in Edgefield is the birthplace of South Carolina’s longest-serving United States senator, James Strom Thurmond. Often called simply “Strom” or “Ol’ Strom,” Thurmond was born in this house on December 5, 1902, though he spent his boyhood on a nearby farm with his two brothers and three sisters. Edgefield is nicknamed the “Home of Ten Governors” for the large number of South Carolina political leaders it has produced, and growing up here had a profound influence on the future governor and presidential candidate. 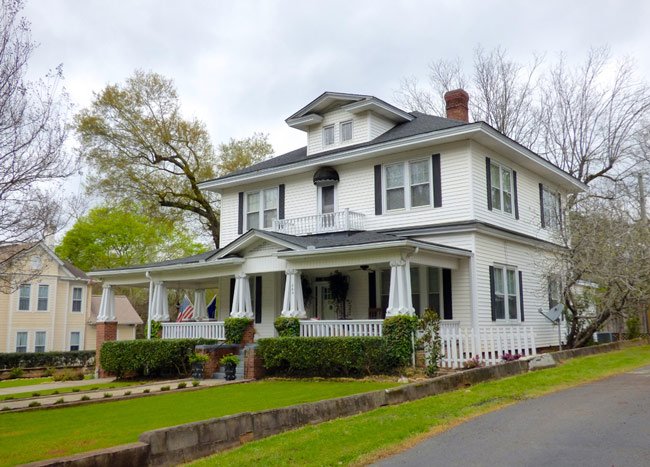 In fact, politics were almost inherent to the Edgefield native whose legendary life began in this home. In those days, Edgefield served as the headquarters for the Red Shirts, a paramilitary coalition of white supremacists, and as a child, Thurmond was well acquainted with their leader, Ben Tillman, a fellow Edgefielder who, like Thurmond, served as both state governor and US senator. Tillman was a close friend of Thurmond’s father, and the elder Thurmond also acted as Tillman’s attorney and campaign manager. Strom recalled being afraid of Tillman as a boy due to Tillman’s bombastic manner. He once told Tillman he wanted to shake his hand, and the gruff senator replied, “Well, why in the hell don’t you shake [it] then?” 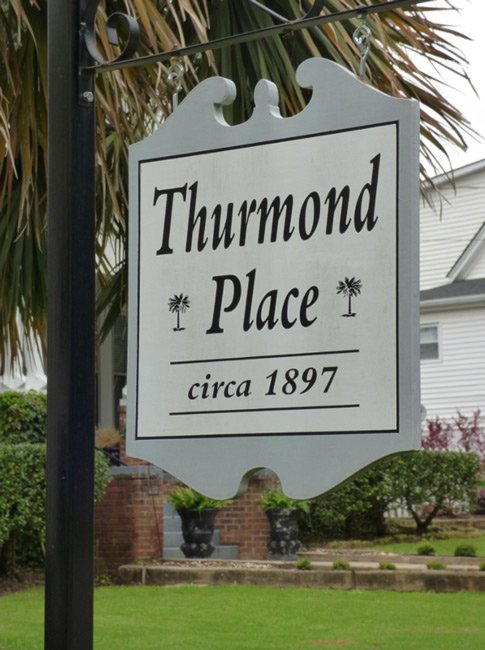 A graduate of Clemson College (now Clemson University), Thurmond began his career in eduction, first as a high school teacher from 1929 through 1933 and then as Edgefield County Superintendent of Education from 1933 until 1938. After serving in World War II, Thurmond was elected governor of South Carolina in 1947. 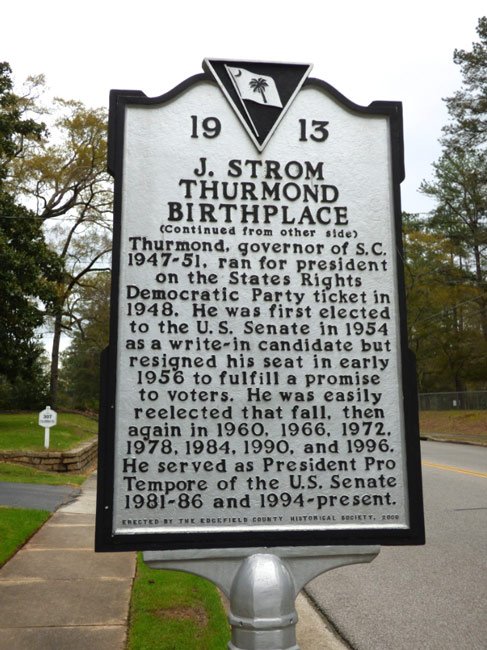 Thurmond held the office of governor until 1951, though in 1948 he ran for president as a candidate on the States Rights Democratic (“Dixiecrat”) ticket and lost. However, he went on to win a seat in the United States Senate in 1954 through a write-in campaign and served until 1956. He then ran for senate again and won the seat repeatedly in subsequent years, switching to the Republican party in 1964 and serving until his death on June 26, 2003 at the age of 100. 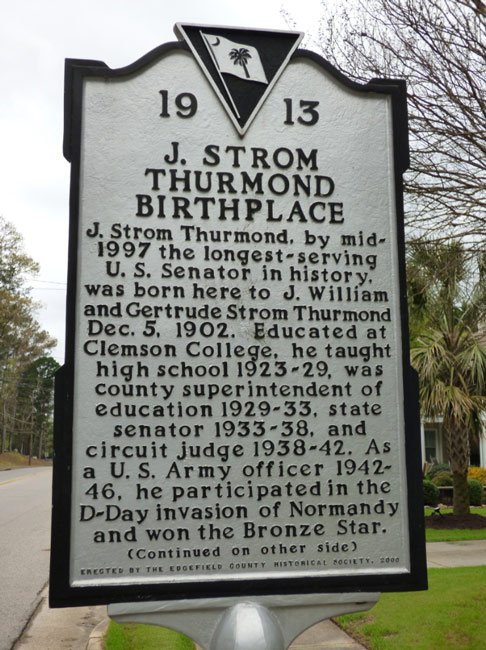 The Strom Thurmond Home is listed in the National Register as part of the Edgefield Historic District:

As early as 1787, the village green near Court House Square was deeded to the town of Edgefield. Several significant buildings surrounding the landscaped square remain unaltered, and the initial layout of the town has not changed. More than forty nineteenth-century buildings are within the historic area, three of which are house museums. There are a number of nineteenth- century Greek Revival homes with large central halls and the basic four-rooms-over-four floor plan. Many of Edgefield’s houses are noted for beautiful Federal style fanlights and unusual doorways, and many have heart pine floors, board or plaster walls, central medallions, window boxing, wainscoting and six-panel doors. A few retain original trompe l’oeil to simulate woodgrains finer than that available in the area.

Other district properties include Victorian influenced homes and downtown commercial buildings. Five churches represent the Georgian, Victorian Gothic, and modified Gothic architectural styles. Much of Edgefield’s significance results from its large number of important government figures: ten former South Carolina governors; five lieutenant governors; and several U.S. Congressmen and Senators. Edgefield is also known for its military history. During the American Revolution the town was vital due to its location on the route between British strongholds Augusta and Ninety-Six. Local figures also participated in the Mexican War, Civil War and Spanish American War, and during Reconstruction local leaders staged organizational meetings here.