This Greek Revival home in the outskirts Winnsboro was built in 1852 for South Carolina statesman William Ross Robertson. Robertson was a probate judge who served the state as a legislator from 1848 through 1849 and again from 1850 through 1851. Robertson also participated in the Secession Convention. Both John C. Calhoun and Confederate General James Chestnut, father of diarist Mary Chestnut, are said to have been a guests in the home, called Rural Point. 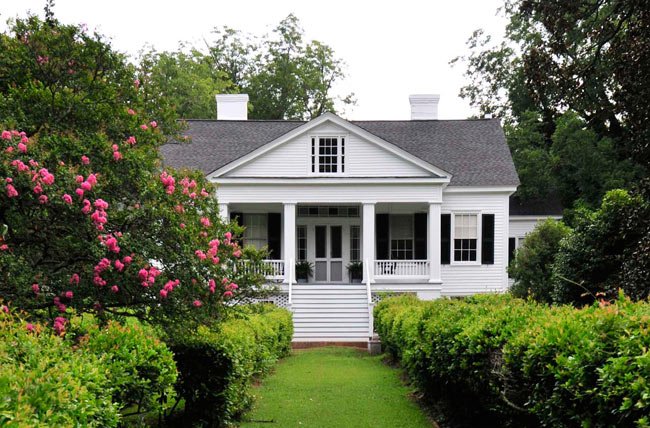 The home is also known as the Robertson-Doty House. In 1887, the home came under the ownership of Williams Doty of Lancaster, Kentucky, and it has remained in the Doty family ever since. 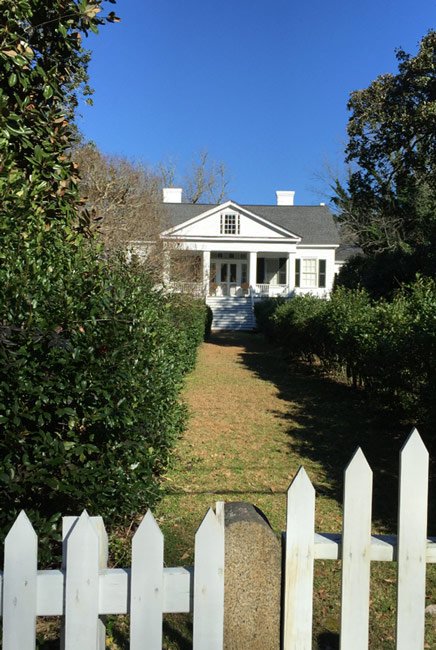 The home is the centerpiece of a small but unusually striking estate. The formal gardens were originally landscaped by the Reverend John Grimke Drayton of Magnolia Plantation in Charleston using mainly non-native, imported plants carried to Winnsboro in wagons.

One of the home’s more interesting features is its raised brick basement, built roughly 7.5 feet from the ground in the locally popular “mosquito cottage” design. This style was thought to inhibit attacks by mosquitoes, as the insects tend to fly closer to the ground. Both the basement and attic serve as practical space, the former housing a billiard room and wine cellar, the latter a hall and two small bedrooms. All of the woodwork above the basement is held together with traditional pegs.

Concerning mosquito cottages, Bill Segars, an architectural historian based in Hartsville, adds the following. Like all things from Bill, it is very interesting.

It is commonly understood that mosquitoes fly between the ground and 25′ high, mostly around 5′ high, or as you know – right around our faces and necks. As light as their bodies are, they can be carried to greater heights by wind currents. Why 25′ and lower, that’s real simple – that’s where the food and water is.

In early days, days with no air conditioners, outside porch living and open windows were very common. So if a house that was built high (relatively speaking) above the ground, away from the food and water source, it stands to reason that mosquitoes may not be as much of a problem than if it were built flat on the ground.

The fallacy of this, as seen in the photos of Rural Point, is that as the flowers and shrubbery grow taller, the food and water sources for the mosquitoes are brought closer to the porch level, or should we say closer to our face and neck.

Rural Point is listed in the National Register:

(Robertson-Doty House) Rural Point is noted for its architecture, garden, and hospitality. Built in 1852 by William Ross Robertson, probate judge and commissioner of equity of Fairfield County who served in South Carolina House of Representatives and as a member of the Secession Convention. This Greek Revival, one-and one-half-story house over a high basement is sheathed in white clapboard with green louvered shutters. The façade has twelve wide steps leading to a gable-roofed porch which is supported by four square columns and surrounded by a balustrade. There is a tripartite window in the gable. The foundation is of solid brick except for the porch which has brick piers with wooden lattice work between. The semi-formal garden is said to have been designed by John Grimke Drayton, noted landscape architect of Magnolia Gardens in Charleston. Garden consists of a series of boxwood and mock orange hedges surrounding two grass plots about 85 feet wide on either side of the walk. Other plantings remaining from the original garden include such rare imports as a Cedar of Lebanon, a Japanese Cedar, a Chinese Varnish tree, a tea olive, and variegated boxwoods. A typical southern planter’s office of white clapboard with green louvered shutters is on the landscaped grounds, which are enclosed by a white picket fence.