Venter’s Landing on the Lynches River in Johnsonville is home to this seven-foot-tall bronze statue of General Francis Marion. It was at this very spot – once called Witherspoon’s Ferry – that Marion, known as the Swamp Fox, received his commission to command the Williamsburgh (now spelled Williamsburg) Militia during the Revolutionary War. 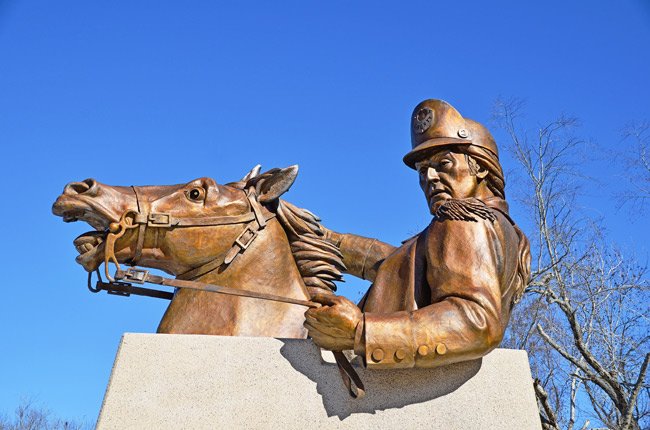 Legend has it that Marion received his famous moniker from British Colonel Banastre Tarleton, who expressed fear and frustration over his inability to capture the “old swamp fox.” General Marion earned his revered place in South Carolina history for outsmarting the British and successfully leading his militia troops in guerrilla warfare following the 1780 Siege of Charleston. Marion was able to elude the British by traveling undetected through the South Carolina swamps and forests. 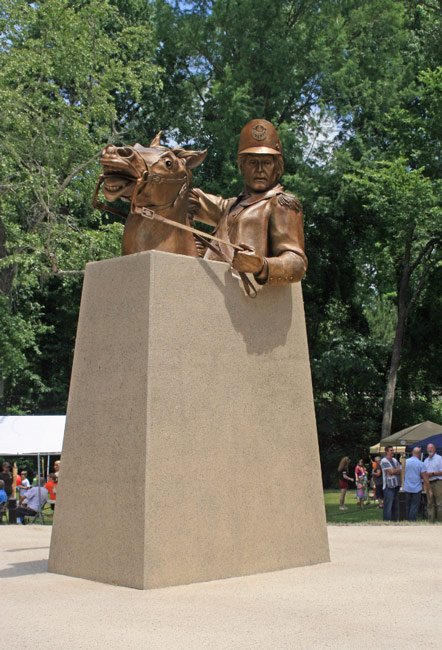 The statue sits atop a twelve-foot-tall base and was revealed in a May 18, 2013 ceremony. Its sculptor, Florence-based artist Alex Palkovich, also created the three-columned obelisk with a bronze bald eagle apex in Florence Veterans Park. The area surrounding the Francis Marion sculpture at Venter’s Landing is now deemed a Veterans Park as well. 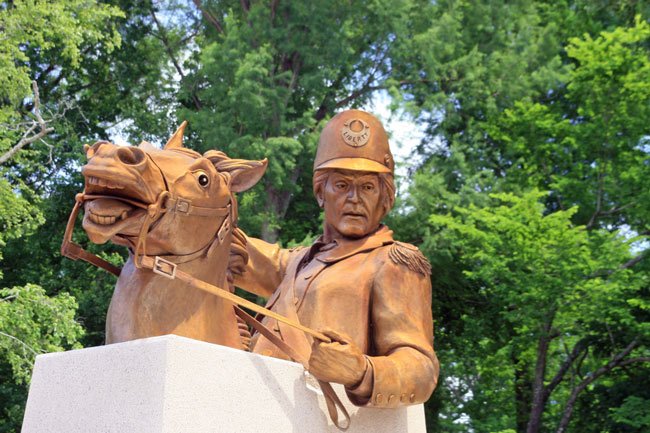 The statue was purchased by private donors for $100,000. It stands next to a bridge on the side of the highway. General Marion has memorials throughout our state, and a Swamp Fox mural adorns the city of Manning. In addition, numerous South Carolina places are named for him, including the City of Marion, the County of Marion, Francis Marion University in Florence, Marion Square in Charleston, and Francis Marion National Forest and Lake Marion, both of which extend throughout multiple counties.

Contributor Linda Brown of Kingstree shares, “I find the Alex Palkovitch statue of Francis Marion intriguing because if you view it from different angles, both General Marion and Ball, his horse, look different and there is a different ‘feel’ to the statue from various angles. Venters Landing, formerly Witherspoon Ferry, was the place that Marion took command of the Williamsburgh Milita on August 17, 1780.”

Josh Dukes of Charleston says: “I’m originally from Johnsonville. Johnsonville mayor Steve Dukes is my dad and he and others worked with Alex Palkovitch on making the statue a reality. At the time of the statue’s unveiling, I spoke with Alex about the design he chose for both Marion and his horse, Ball. One interesting fact is Ball has a wild, almost crazed look in his eyes. Ball represents the times Marion lived in – wild and out of control with revolution and uncertainty. Marion is calm and holding the reigns, taking control of the turmoil and chaos of his surroundings. Brilliant work!”