Many people call this 20,000-square-foot island off the Marsh Walk in Murrells Inlet Goat Island (not to be confused with the Goat Island in Charleston County). The island sits just beyond Drunken Jack’s, one of the many restaurants found here in the Seafod Capital of South Carolina, and it is sometimes also called Drunken Jack’s Island for that reason (not to be confused with Drunken Jack Island in Huntington Beach State Park). However, the more common moniker of Goat Island is fitting; if one looks closely at this dusk-drenched photo, goats can be seen looking out towards the water. Wait – goats? 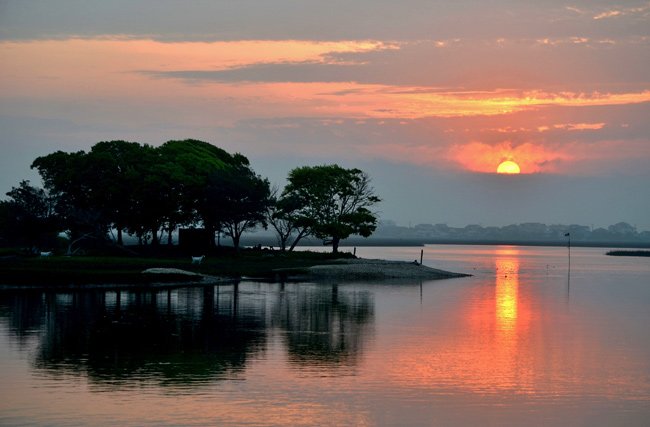 For more than a quarter of a century, the owners of Drunken Jack’s restaurant have been keeping goats on this islet, which the restaurant owns, during the warmer months. The goats naturally maintain the island’s vegetation and provide a fun spectacle for guests. They are cared for by longtime employee and local celebrity “Bubba Love” (Jerome Smalls), who feeds and tends to the animals daily. Peacocks were added to the mix in recent years, and the unusual view from the half-mile Marsh Walk leaves a lot of out-of-towners asking how in the world the creatures got there. As it turns out, the answer to this mystery is as simple as one of Drunken Jack’s famous hushpuppies. 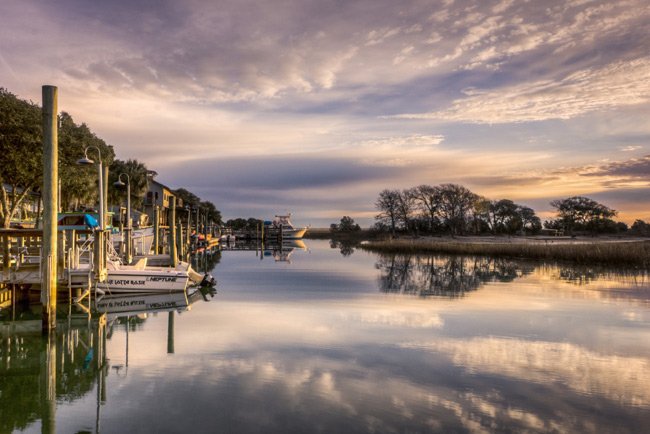 The Jolly Roger in the top photo harkens back to the inlet’s days as a pirates’ cove. The winding channels of Murrells Inlet are said to have once provided hiding spots for pirates as they waited to overtake slow-moving merchant ships. The pirate theme is prevalent along the coast, and not without reason. Rice was a hugely successful crop here in the eighteenth and nineteenth centuries, creating unimaginable wealth for planters. Cargoes of Carolina Gold were vulnerable, and rumors of buried treasure abound.